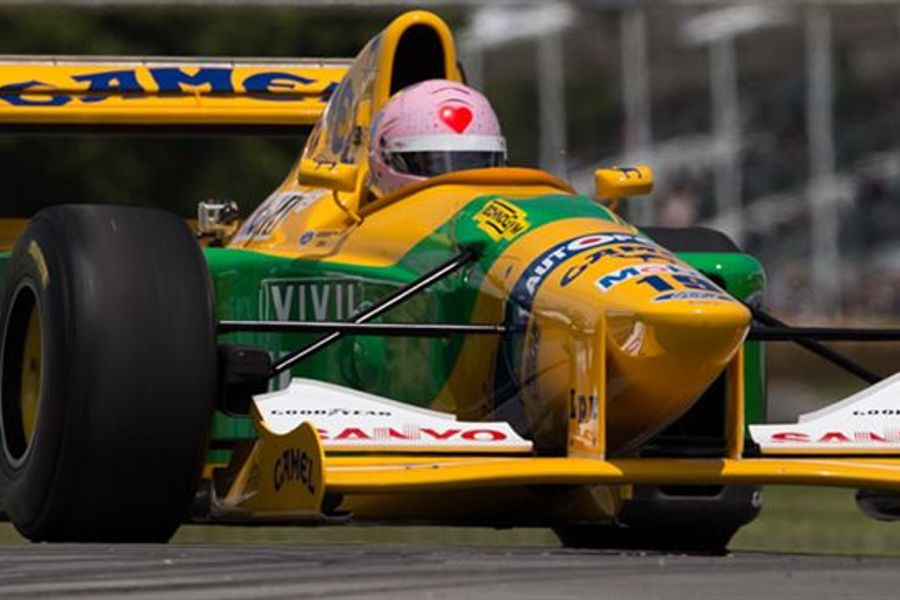 he unmistakable sound of Formula 1 engines will echo round Donington Park on Saturday 30th April and Sunday May 1st as historic Formula 1 cars stage a series of spectacular demonstrations on the first two days of the Donington Historic Festival (that takes place on 30th April, 1st & 2nd May).
The youngest Formula 1 demo cars will be the 2002 Jordan EJ12 from Takuma Sato’s F1 debut year, the ex-Michael Schumacher 1992 Benetton B192, and the 1990 Camel Lotus 102 (ex-Derek Warwick/Martin Brundle/Johnny Herbert). The previous two decades will be represented by the ex-Rupert Keegan 1977 Hesketh 308E, 1983 Williams FW08 (ex-Keke Rosberg/Jacques Laffite), the ex-Jean-Pierre Jarier/Piercarlo Ghinzani/Corrado Fabi 1983 Osella FA1-D and two Tolemans. The 1985 TG-185 is ex-Teo Fabi, while the 1984 TG-184 was Ayrton Senna’s regular test car throughout 1984, and is the car in which he caused a sensation in Friday practice for the British GP at Brands Hatch, setting the fastest time in both of the day’s sessions.
Donington Park is a magnificent spectator circuit, as well as a firm favourite with drivers, and new viewing areas in the infield will give the crowds a superb vista as the historic Formula 1 machines storm round the track, Lamborghini V12, Ford DFV and Hart engine notes among the power units blending to form a very distinctive melody. From the classic Camel Lotus yellow to the Hesketh’s Penthouse/Rizla design, colourful period liveries will also make for some great photo opportunities out on track and in the paddock.
Across 17-exhilarating races, the Donington Historic Festival will showcase some 400 world-class competition machines from the 1920s to the 1990s. The Festival will also pay tribute to earlier Grand Prix racing, when it celebrates the 80th anniversary of Richard Seaman and Hans Ruesch’s victory in the 1936 Donington Grand Prix by staging the HGPCA Nuvolari Trophy, with a grid of iconic Grand Prix and Voiturette cars up until 1950.
Away from the competitive action, the ever-popular historic rally cars will be burning rubber once more, as the mighty Group B machines and the cars of the Historic Rally Car Register entertain the crowds. Historic karts will also return to Donington Park for the event, as will dozens of car clubs, who will gather in the Club Village in the infield. The race and rally paddocks are both open-access and always draw big crowds.
Donington Historic Festival Formula 1 Donington Park