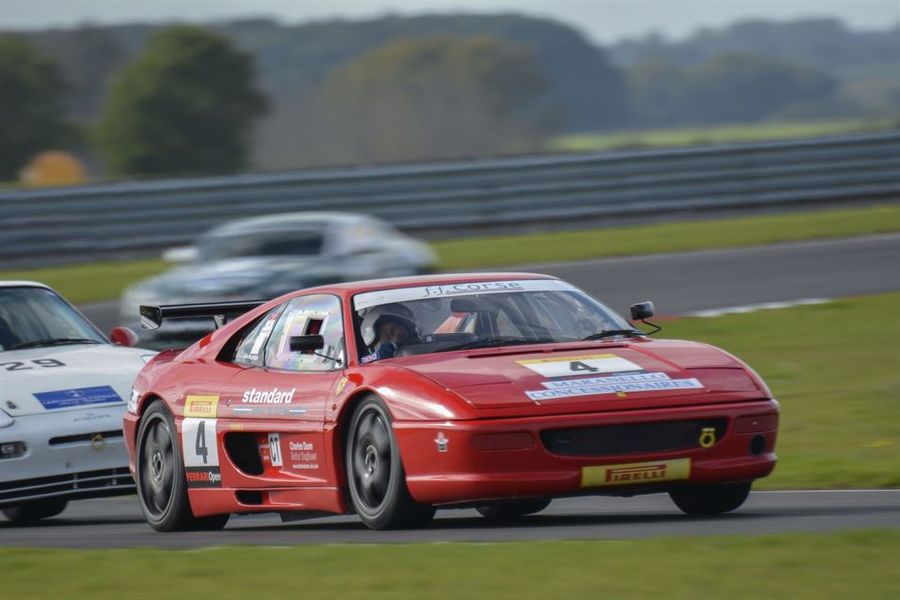 A tense conclusion to the 2014 AMOC Intermarque Championship was one of the highlights of the final Aston Club Racing meeting of the year at Snetterton on Saturday 27 September.

Ferrari 355 driver, Tim Mogridge stayed out of trouble forging a clear path to Championship victory despite finishing sixth in the 45 minute thriller.  Aston Martin GT4 Vantage racer, Christopher Kemp had drafted in works driver, Stuart Hall to share his potent racer in a final bid to elevate the Aston Martin marque to overall Intermarque honours above over Ferrari and Porsche.  Despite incurring a 30 second ‘pro driver’ penalty, Hall hunted down the 1973 Aston Martin V8 duo of Chris Scragg and Boysie Thurtle who had set pole and dominated the first three quarters of the race.  Despite being 36 years the senior to the GT4 raider, the V8 had the legs on the GT4 on the straights resulting in four changes of lead on one lap just 3 minutes from the chequered flag. But Hall powered away for the race win, meanwhile Mogridge utilised his precise drive and the one point advantage he had to Porsche 968 rival Stephen Atkinson, (who finished in ninth), to win his first AMOC Intermarque Championship.

The Norfolk MotorSportVision track was glorious in the Autumn sunshine which saw another four AMOC categories conclude their year. Despite a strong opening challenge, Cooper T38 driver, Frederic Wakeman could not displace gallant Scot, Darren McWhirter from victory in the AMOC ‘50s Sports Car Race including the Vredestein XK Challenge race in his Tojero Jaguar. The half hour event saw close battles throughout the well supported field of iconic ‘50s cars.

Veteran competitor, Pete Foster claimed a memorable victory in "Equipe" GTS seeing off a race long threat from John Yea’s MG B.  Having bogged down at the start, Foster worked his way back into the lead and drove to a defiant win, never faltering under the pressure from Yea who was on Foster’s bumper for the duration. Robert Bremner became the second person on the Innes Ireland victory roll this year after dominating  the 40 minute two-driver race in his distinctive orange AC Cobra. Pole man, Ben Shuckburgh, had to take an early bath in his 1963 low-drag Jaguar E-type when his brakes depleted to nought, the stage was set for Bremner to take a convincing victory drive in which he lapped the entire field, including the second place Whitaker father and son pairing in their Ford Mustang right on the line.

The HRDC fielded two near capacity grids for the penultimate ‘Touring Greats’ and ‘Allstars’ races. Mike Whitaker demonstrated a masterclass of TVR Griffith driving in the ‘Allstars’, reclaiming his lead that he lost at the start, to win by nearly seven seconds to Ben Shuckburgh’s E-type. Young Richard Woolmer left the old firm quaking in their boots completing the top five in his tiny capacity Austin-Healey Sebring Sprite. The Nick Naismith / Philip Perryman Austin A95 Westminster defied the threatening Jaguars in ‘Touring Greats’ finishing twenty seconds clear of the Austin A40 of Mathew Moore who snuck under the radar to a convincing podium place.