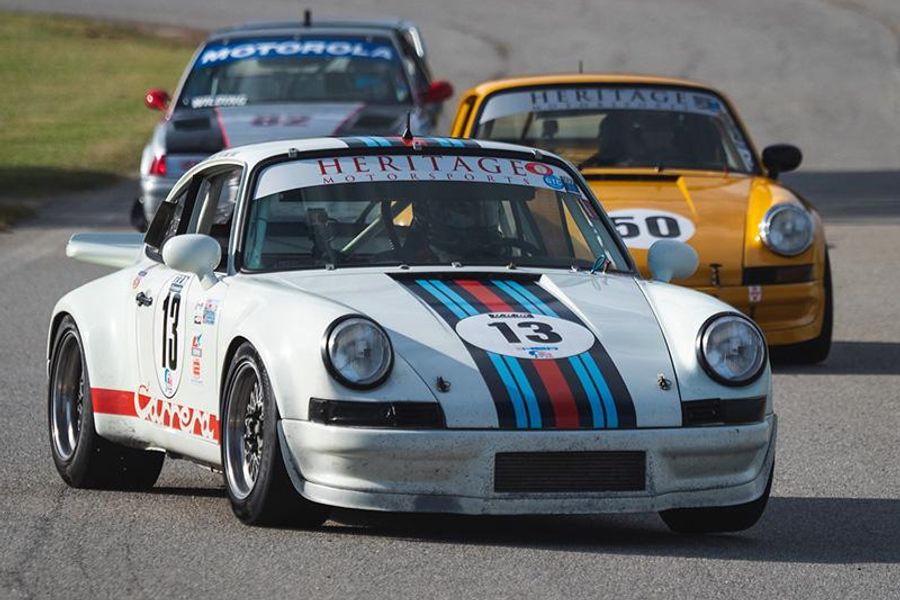 In the final tune-up for Historic Sportscar Racing (HSR) competitors before back-to-back "HSR Classics" at Daytona and Sebring in November and December, official on-track competition at this weekend's Savannah Speed Classic is well underway on the Grand Prize Circuit on Hutchinson Island where the event's first four race winners were crowned on Friday.

The opening race of the weekend was Friday's HSR Global GT Challenge sprint that was won by Henri Sicotte in his 2010 No. 88 Camaro GT.R prepared by GT Racing. Sicotte was joined on the podium by reigning Global GT Champion Don Ondrejcak who finished second in his 2007 No. 65 ex-TRG Porsche 997 GT3 Cup car.

Third in Global GT went to Russell Wittenberg who hit the Savannah podium for the second-straight year in his 2009 No. 33 Porsche Cayman S. Wittenberg's Cayman, which he drove to a WeatherTech Sprint win in last year's Speed Classic, carries the memorable livery of the TAG Heuer Supercup Porsche that Mika Hakkinen raced in the early 1990s before winning back-to-back Formula 1 World Championships in 1998 and 1999.

Friday's other feature race was the Sasco Sports International/American Challenge that saw Mike Banz take the overall and Porsche-class victories in his Heritage Motorsports 1974 No. 13 Porsche 911 RSR. The American division was an all-Mustang show with Craig Ross taking the class victory in the 1970 No. 72 Cross Ross Boss Racing Ford Mustang Boss 302 and second-place finisher Steve Piantieri in his 1965 No. 95 Ford Mustang 2+2.

Banz shared the overall Sasco Sports podium with Aaron Nash, who won the International class while finishing a solid second overall in his No. 83 1997 BMW M3. Third overall and second in International went to Michael Carter in his 1993 No. 48 Mazda Miata. Driving the oldest car in the race, Andrew Eagan put in a great drive in his 1964 No. 82 Lotus 26R to finish third in International and fourth-place overall.

Banz was joined in the Porsche-class top-three by his Heritage teammates Fred Schulte, who took runner-up honors in his 1973 Porsche 911 IROC, and the third-place 1973 No. 41 Porsche 911S of Russell Gee.

Set for its fourth running next month after debuting in 2014, the HSR Classic Daytona presented by IMSA is now a firm and annual fixture on each year's HSR race event schedule.

Officially titled the HSR Classic 12 Hour at Sebring, Pistons and Props, presented by the Alan Jay Automotive Network, the HSR Classic Sebring will be run for the third time after debuting in 2016.

The "HSR Classics" events at Daytona and Sebring share the card each weekend, respectively, with the Daytona Historics and Sebring Historics races that will bring the full-season 2018 HSR championships to a close.