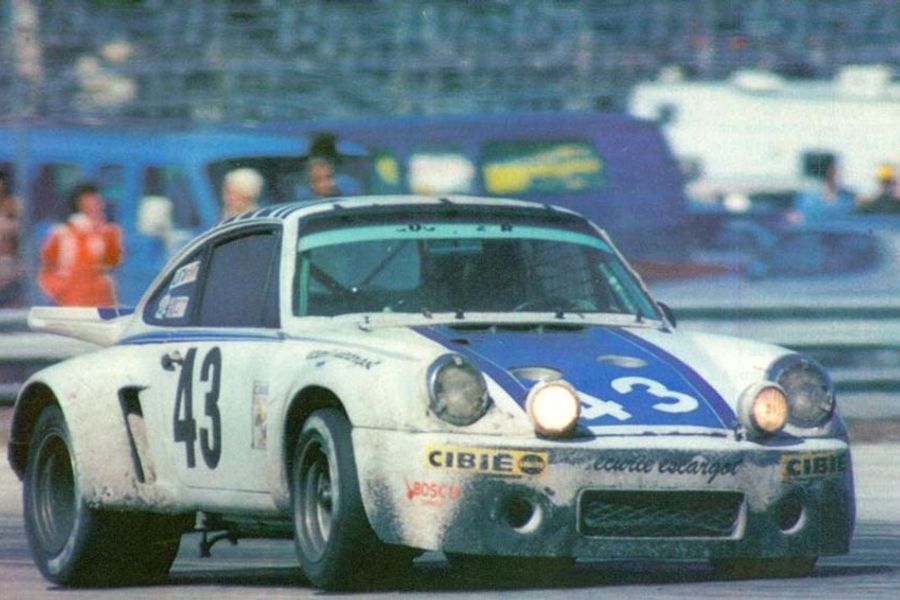 Chuck Dressing is a man who can write with authority on the exploits of Hurley Haywood and Brumos Racing, having been presnt for most of them, so take the opportunity to once more enhoy part one of his tale of an epic year for Haywood:

It has been forty years since Hurley Haywood became the first racer to win the Rolex 24 and the Le Mans 24-Hours in the same year, and, as usual with the Florida racer, Porsche was at the core…

Hurley Haywood took to Porsche’s finicky 911 with something that now seems like instinct. Today he still guides any 911 with a light touch, but now there is no cigarette in the left hand of the IMSA’s first Camel GT Champion. He gave up that habit more than thirty years ago but it didn’t affect his skill. He won Le Mans again in 1994 with that same light touch and without the aid of tobacco.

It has been four decades since Hurly Haywood first raced at Le Mans. The place still holds a fascination for him, though he has won the seminal 24-Hours three times. Unlike six-time Le Mans winner Jacky Ickx,  Hurley is not sentimental about Le Mans as his introduction to the city was anything but romantic or salubrious. But the circuit – the old circuit before the chicanes – still makes him smile.

Standing with him in the showroom of Brumos Porsche, now Porsche of Jacksonville, watching ‘Hot Lap Le Mans’ is revealing…if you pay attention to Hurley and now the mesmerizing images of his co-driver Jurgen Barth in the 1977 race winning Porsche 936. Hurley watches silently, muscles in his face relax and his eyes soften like he’s seeing a famous painting in a museum. As Barth approaches the tree on the Mulsanne, Hurley’s mouth opens just enough to inhale. At the kink, at well over 200mph, Barth eases the 936/77 gently to the right: Hurley takes a sharp, deep breath through his mouth and smiles: “I love that…” he says, his voice practically a  whisper.

The 936 was his favorite Le Mans Porsche. Not the 1997 winner in its famous Martini livery, but the 1981 ‘Jules car’ as he calls it, the one with the ‘Indy 500’ engine. He didn’t finish the race that year…but he loved that car. He set the fastest lap that year during his first morning stint with the ‘Jules car’.

Talk to him about the 1973 Can-Am season and the Brumos 917/10 and all you’ll hear is praise for Mark Donohue who showed him the way with Porsche’s Can-Am turbo-monster. Talk to him about Le Mans and you will hear about the  heroics of Jacky Ickx and the quiet brilliance of Jurgen Barth.

Daytona 1977 was a good year for Haywood. His third Rolex 24 win with an unrated Carrera RSR touched a nerve with Stuttgart. Porsche’s long-playing role as racing’s unofficial underdog was boldfaced and underlined by Haywood’s third Rolex 24 Hour victory. No matter to the works team that he beat their factory turbos, it was how Hurley got the #43 Ecurie Escargot RSR to Daytona’s victory lane that impressed some and awed others. It was a virtuoso performance – practically a solo performance – through Daytona’s long night.

Hurley still has the ability to shut out the world. “I can be alone in a crowd,” he said some years ago, and it is true. He drove through the thick fog to win the 1975Rolex 24. It was so bad they even considered stopping the race. When Hurley set the fastest lap in the dark and the worst of the fog IMSA officials kept the course green.  He shut out everything but the race, his whole world was the speedway and only in the present tense. It is a rare talent.

Again, in 1977 when his Daytona co-drivers disappeared after the sun went down, Hurley did the small hours of Saturday night and Sunday morning without rest or relief, enough to have driven the #43 RSR from Daytona to Central Park had he been on the highway and not the speedway. There were no rules about things in those days. Today a few IMSA old-times call the rule limiting time at the wheel ‘The Hurley Rule’ because of that night 40-years ago. Things like that do not go unnoticed.

Hurley had just scored his third, in four years, victory in the Rolex 24, and did it with an underdog, Porsche’s proven Carrera RSR. He had won his first Rolex 24 by 22 laps three years earlier in a Porsche Carrera RS. In 1975 an RSR wearing Brumos’ famous red and blue stripes win the Rolex 24 by 15 laps. The white car from Jacksonville led five RSRs across the finish line.

That sort of stout reliability spoiled Porsche racers in the mid-seventies, but it was something Peter Gregg and Hurley Haywood didn’t take didn’t take for granted. It was Brumos’ – Peter Gregg’s – policy to reduce each new Porsche racer to individual parts and inspect, correct (if necessary) and reassemble. When finished, Brumos crew chief Jack Atkinson would apply a sticker to the tail of each white Porsche: ‘Made in Jacksonville’.

“I wasn’t convinced the new 935 Turbo had proven reliability and that they were ready for Daytona,” said Haywood of Porsche’s new 935 on its American introduction at the 1977 Rolex 24 at Daytona.

There were two  935s at Daytona 40-years ago, and an all -tar squad of drivers, managers, and technicians to make sure the new turbos had a stellar US debut. Jacky Ickx and Jochen Mass (MIX on Porsche’s pit boards at Daytona) were there in the famous Martini & Rossi livery that had won the 1976 World Manufacturers’ Championship with the 935.

The Daytona 935s were the first true Porsche factory entries in the Rolex 25 since 1971. Their qualifying times in the low 1m48s range recalled the pace of the FIA prototypes last seen at Daytona in 1973. Hurley, at the ripe old age of 28, viewed it all with the calm yet skeptical gaze of a tenured veteran with thousands of miles of Daytona experience.

They qualified 12th in the Ecurie Escargot - Team Snail – RSR, flying well below the radar and well out of the limelight slathered on the  number one MIX Martini 935. Besides…Franz Blam had a plan. It pivoted on Haywood’s eerie Daytona skills and savvy. Andy his eyesight – even well into his forties Haywood still blew through his annual eye exams with 20/10 vision.

Haywood went at Daytona all night without relief 40 years ago. Sometimes he’d exit the #43 RSR and grab a sandwich or perhaps change helmets to ward off any complaints from competitors. He stayed well hydrated and settled in for the haul. He had no other option besides quitting. Not possible.

When the sun came up and relief arrived, Hurley drove across Speedway Blvd. to the Howard Johnson’s and at a massive breakfast.

“Everything!” said Haywood. “Eggs, bacon, sausage, pancakes, you name it!”

Then he took an hour’s nap in his room at the Indigo Inn.

“I felt pretty good after that.”

Blam’s engine was still running strong – and the pace was enough to figuratively rub salt into the wounds of the 1978 Rolex 24 winning 935 that, a year later, would have been four miles behind Haywood, Helmick and John Graves’ 1977 pace. 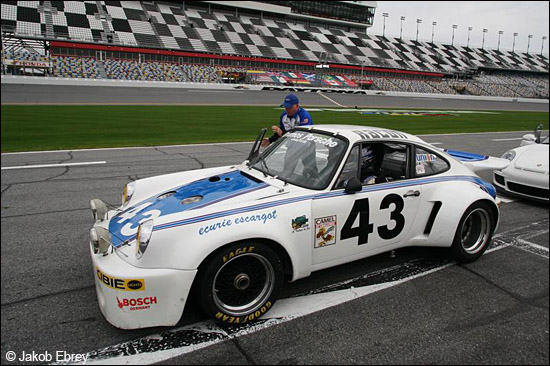