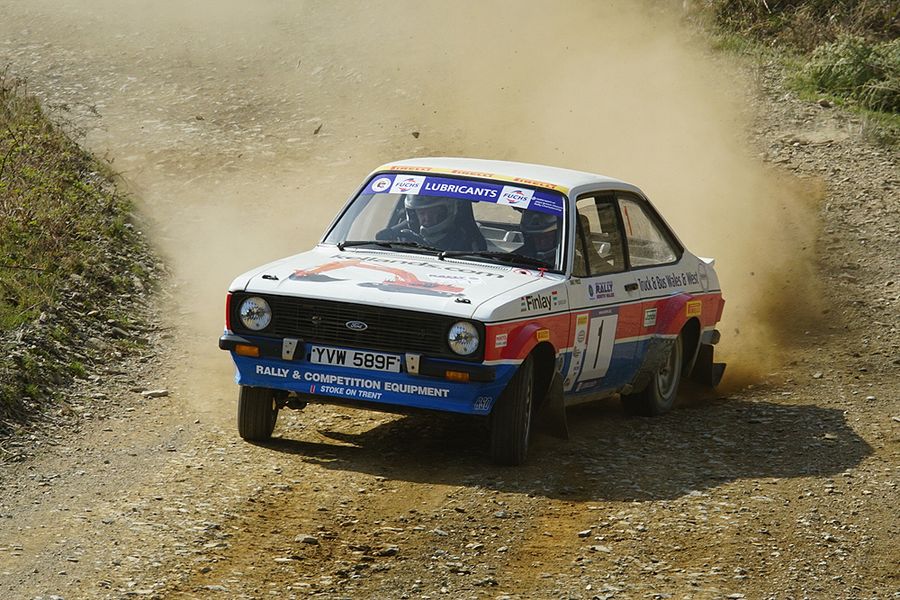 Nick Elliott and Dave Price will head the FUCHS LUBRICANTS Motorsport UK British Historic Rally Championship into the Pirelli Rally (27th April) after taking maximum points on the opening round, Rally North Wales at the end of March.

Historic cars spanning the 1960s and 1970s will tackle the Kielder forest stages in the second of the seven-round calendar, which includes five gravel rallies and two asphalt events. As well as an on-going TV package, the championship will make extensive use of social media channels with a particular focus on Facebook and YouTube.

Elliott, on his first gravel rally in an Escort for 10 months, kept to his plan of going quickly from the start in Wales and focusing on maximum points rather than taking big risks trying to chase the non-registered Osian Pryce. In fact, it was another Price that held Elliott’s attention for much of the day as Joe Price and Chris Brooks mounted a major challenge and rounded out the top three overall, just 24s down on the Cheltenham crew.

Elliott and Price have been BHRC pacesetters for the better part of a decade, but the title has so far eluded them. This could finally be their year, for they are very quick on gravel and another strong result in Kielder would really set them up for a title bid. However, Price is a former winner of this event, so he will be very strong.

One of the most notable drives of Rally North Wales netted third overall BHRC points and Category 2 victory for Stanley Orr and Grahame Henderson. Competing on Welsh gravel for the first time in two years, the Northern Irishman pedaled his Escort Mk1 in style to open his title challenge with a very strong result.

Next up in the BHRC ranks was impressive BDG-debutant Ben Friend and Cliffy Simmons, having their first rally since stepping up from Pinto power. They are in for a very busy weekend as they plan to contest the asphalt Rally Clacton and Tendring on Sunday after a seven-hour drive home on Saturday evening. The Essex-based closed-road event is the home event for East Anglia-based Friend.

Notable in the Category 3 classes were Josh Browne and Jane Edgington in their Pinto-powered Escort Mk2. They set a cracking pace on the way to a commanding class D3 victory and an overdue first finish together. Brothers Malcolm and Ron Mounsey (Talbot Sunbeam) bagged the class D2 win.

Orr and Henderson stormed to Category 2 victory but could never relax too much as John Perrott and Andrew Sankey took second in their Escort Mk1 and fended off Chris Skill/Tom Murphy by 20s while Warren Philliskirk and Max Freeman in turn kept Skill on his toes.

Simon Pickering/Colin Jenkins (Escort Mk1) claimed class C3 but the other star of Category 2 was young Rory McCann from the Isle of Man who, partnered by car owner Tim Tugwell, won class C2 and finished 28th overall in their Hillman Avenger. On his first experience of both gravel rallying and a rear-wheel-drive car, McCann was very impressive and topped the Sherwood Engines BHRC2. Finally, in Category 1 Bob Bean and Malcolm Smithson dropped two minutes in a Gartheiniog ditch in Bob’s Lotus Cortina, but recovered to claim the BHRC category.