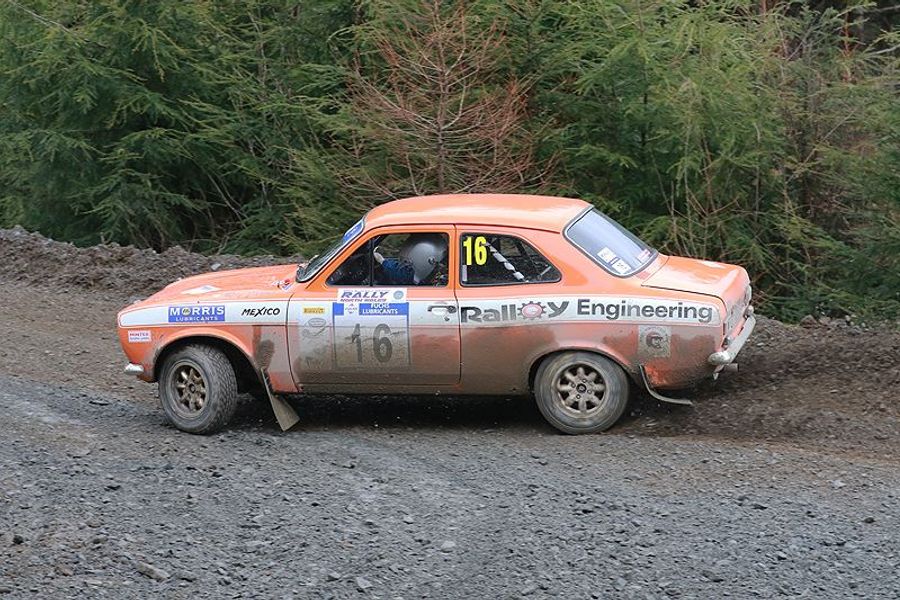 Nick Elliott and Dave Price got the FUCHS LUBRICANTS MSA British Historic Rally Championship off to a fantastic start on Rally North Wales (Saturday 24th March) with a mighty historic victory at the head of a tremendous field.

As well as being the first of eight BHRC rounds, Rally North Wales was also the first round of the BHRC Forest Challenge, supported by Rally and Competition Equipment, and the opening event for the new BHRC2, supported by Sherwood Engines. A sensational field lined up for the BHRC opener and there was tremendous competition across all classes.

Elliott and Price (Ford Escort Mk2) threw a marker down on the opening test of six top quality stages in the Dyfi complex and took a lead they would never lose. However, they had a big rival on that opening stage as the BRM-powered Hillman Avenger of Ieuan Rowlands and Emyr Hall was believed to have finished the stage within four seconds of Elliott. Sadly Rowlands went out on stage two with distributor problems.

However, Elliott could never relax as Marty McCormack/Phil Clarke and Paul Barrett/Dai Roberts kept up the chase. At the halfway point, Ryan Barrett and Paul McCann were even closer to Elliott but a broken diff ended their rally on stage four. Instead, Ryan’s elder brother Paul was getting quicker and quicker in his fresh car and ended the rally just two seconds down on McCormack. But another overall historic victory and a win in the Rally and Competition Equipment Category 3 went to Elliott.

A good day for Steve Bennett and Osian Owen netted fifth behind the non-registered Osian Pryce, despite losing a place back to Pryce when they knocked a tyre off the rim on the final stage. Alan Walker and John Connor battled all day with a misfire, but rounded out the top six after a friendly battle with Simon Webster/Jez Rogers, while James Slaughter/James Whitaker had a good day in eighth overall despite a steering rack issue before service.

Class D3 produced another of the drives of the rally as Stuart Egglestone and Brian Hodgson claimed a superb victory in their Pinto-powered Escort Mk2. Over the first three stages Egglestone had to push hard to fend off Josh Browne/Jane Edgington and Ben Friend/Cliffy Simmons. Egglestone headed the young chargers by 10 seconds at service but then had an easier afternoon as Browne retired at service with an oil leak and Friend suffered a final stage engine failure.
BHRC2 supported by Sherwood Engines
Rally North Wales was the first round of the new BHRC2, supported by Sherwood Engines, which has been created to turn the spotlight on the REIS Category 1 (pre-1968) and all other up to 1600cc cars in the championship.

Well over 20 cars lined up for the inaugural round of BHRC2 and it was the class C2 Escort Mk1 of Milner/Jarvis that set an outrageous pace to take a place in the overall top 10. However, they had a late worry when a loose oil union was found going into the second run of Gartheiniog. It all held together and Milner went seventh fastest through the nine-mile stage.

The amazing Bob Bean headed the strong Category 1 field. Fresh from his 80th birthday, Bob and new co-driver Miles Cartwright were mighty in their Ford Lotus Cortina and showed hallmark pace to win the category overall.

Other class winners in Category 1 were Malcolm Rich/Arwel Blainey (Ford Anglia) and Rikki Proffitt/Graham Wild (Porsche 911). The Porsche crew struggled with a misfire but went clear once 911 rival Dessie Nutt left his car teetering on the edge of a big drop at the flying finish of the first stage.