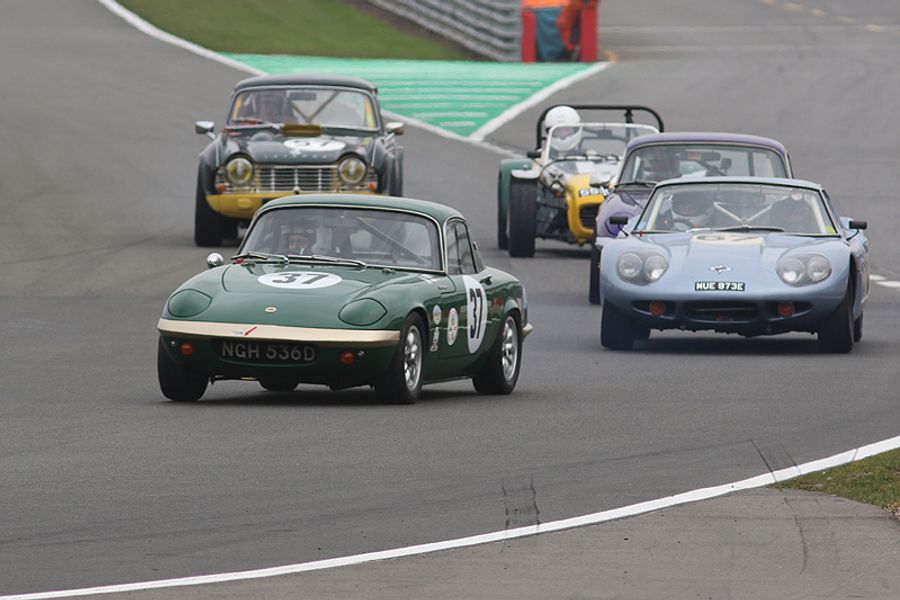 The 2019 racing season for the Historic Sports Car Club will get off to a flying start at Donington Park on Saturday (March 30th) with a fine entry of 215 cars for an eight-race programme. The one-day meeting at the superb East Midlands track heralds the start of the racing year for eight of the Club’s categories and with between 20 and 30 cars on every grid, there will be some great racing to open the new season.

With 30 cars on each grid, the twin HSCC Road Sports categories will be major features of the racing and the Historic Road Sports Championship opener will be topped by the debut of a freshly-prepared AC Cobra for former champion Kevin Kivlochan. He will face four Morgan Plus 8s, including those of Richard Plant and Peter Garland, as well as a gaggle of rapid Lotus Elans and Ian Burford’s Ginetta G4.

The 70s Road Sports counter will be just as competitive as reigning champion Jeremy Clark returns with his Lotus Elan to take on the challenge of former champion Charles Barter (Datsun 240Z), John Williams (Porsche 911SC), John Dickson (Ferrari 308GTB) and father and son Mark and Will Leverett (Lotus Elan and Europa).

Another 30-car grid will contest opening round of the Historic Formula Ford Championship as reigning champion Cameron Jackson starts his title-defence in a rare Winkelmann WDF2. Making the US version of the Palliser into a winner is a new challenge for Jackson and Neil Fowler Motorsport and there is every reason to expect that the car will be in contention from the very start. Jackson’s rivals include Linton Stutley in Richard Tarling’s Jamun T2, rapid Merlyns for Callum Grant, Ben Tusting and Pierre Livingstone, Will Nuthall in another Jamun and Cormac Flanagan’s Alexis.

A 27-car Historic Formula Ford 2000 will be another fine spectacle as current champion Andrew Park (Reynard SF81) heads a fine field of 2-litre-engined slicks and wings single-seaters. A gaggle of rivals will be out to challenge Park, including Nelson Rowe (Reynard SF79), Ian Pearson (Royale RP30) and friends and rivals Paul Allen and Jason Redding in their Reynards.

Another championship getting off to a great start is the Guards Trophy, with a 40-minute pit-stop race with optional driver change. Seven examples of the glorious Chevron B6/B8 design will grace the grid, with likely front-runners being Philip Nelson, Charles Allison and Dean Forward, while the open cockpit sports-racers are headed by Nick Pancisi (Elva Mk7S), young lions Peter de la Roche and Benn Tilley in Lotus 23Bs and two more Elvas which could be real dark horses in the hands of Formula Ford ace Niall Murray and Historic F2 racer Matthew Wrigley. Heading the GT pack will be the mighty TVRs of Mike Gardiner/Dan Cox, John Spiers and Peter Thompson.

The Classic Formula 3 Championship will deliver yet another strong grid, boosted by cars from the URS Classic Formula Ford 2000 Series. The Ralt RT3s of David Thorburn and Paul Smith are joined by two more for series newcomers Fraser Gray and Steve Maxted, while local ace David Shaw could set the ultimate pace in his ex-Nelson Piquet Ralt RT1. Leading the FF2000 pack are the Van Diemens of Chris Lord, Clive Wood and Ben Stiles.

A good field of Historic Touring Cars will assemble for the opening round of the championship with a typical mix of cars, ranging from Minis and Hillman Imps to Lotus Cortinas and Ford Mustangs. No less than 10 Lotus Cortinas will take on the Ford Mustang of Mark Watts, while Bob Bullen will head the Ford Anglia contingent and Adrian Oliver, Roger Godfrey and Steve Platts spearhead the less powerful cars.

Qualifying starts at 9.10am with the first of eight races at 1.15pm.