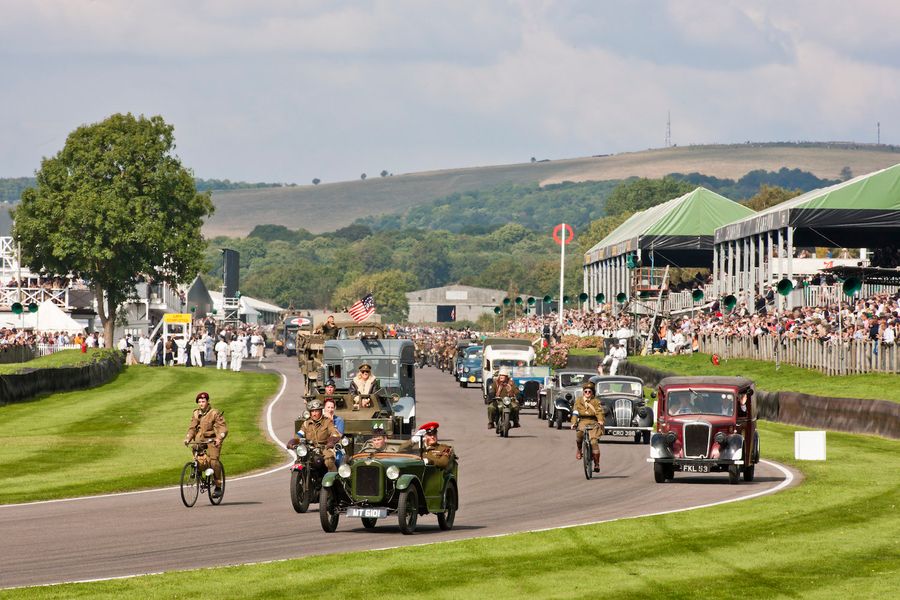 This September the Goodwood Revival will invite spectators to take part in an on-track recreation of a momentous and moving moment in British history; the announcement at 3pm on 8 May, 1945, that the war in Europe had come to an end.

The Goodwood Motor Circuit is taking as its inspiration the jubilant scenes which took place on The Mall in London immediately following Churchill’s radio announcement. Happy Londoners thronged the streets around Buckingham Palace, waving flags while around the country bunting strewn street parties celebrated the end of nearly six years of war.

The Goodwood Revival will be celebrating and paying tribute to the spirit of the people swept up in that momentous occasion by inviting all spectators in appropriate period dress on to the grid on Sunday lunchtime for a special moment.

Assembled on the grid will be a fleet of private, commercial and military vehicles from the period, including buses, delivery vans, milk floats, flat-bed lorries and even bicycles, ready and waiting to do a ‘Victory Lap’ of the Goodwood Motor Circuit.

Throughout the rest of the weekend the Revival will be capturing the excitement and promise of those heady days in May 1945 with a weekend-long British street party held at the Gate 2 gravel car park. Long tables, bunting, old newspaper recreations and period vehicles will recreate the bygone era. Live music and old gramophone records will provide the soundtrack for a celebratory swing dance, with backing from the roar of Rolls-Royce Merlin engines overhead in Goodwood’s resident Spitfires.

The Revival is rightly famous for the way in which attendees get into the spirit of the weekend and a new Goodwood guide will help people pull off the utility, uniform or demob looks of the time. Civilian styles of the time were heavily influenced by events, with women wearing simple, much-mended floral dresses or the dungarees and head scarves of the Land Girls. Uniformed women were an obvious presence through the incredible work of the various Auxiliary branches of the armed forces. When not in uniform, men’s clothes had a strong military influence, with trench coats and famously ill-fitting demob suits being the most obvious.

The Duke of Richmond commented: “This year, we will rightly be celebrating people rather than vehicles on Sunday afternoon as we reflect on one of the most important days in modern European history. The lessons of those years of resilience, self-sufficiency and make do and mend spirit are still very relevant as Goodwood enters a new, more sustainable era.”