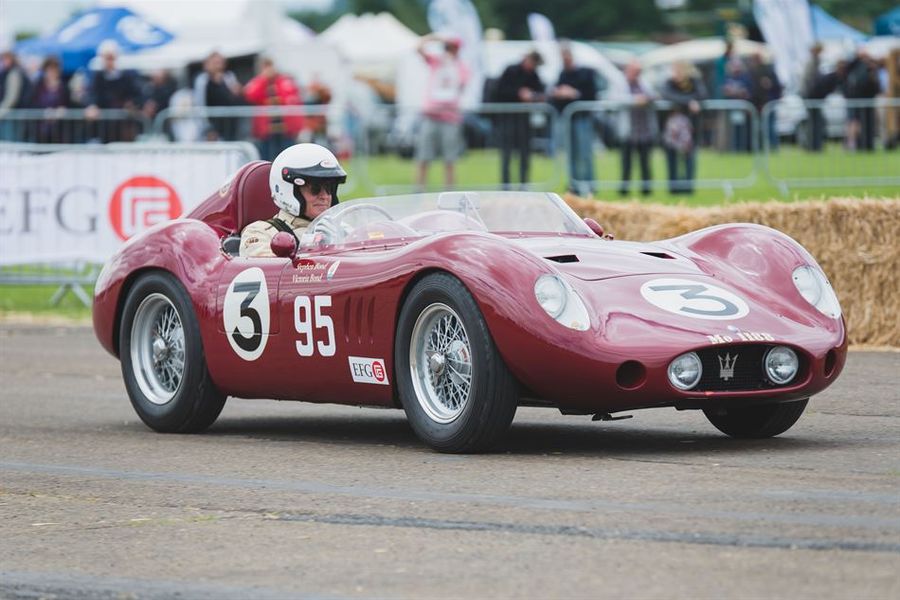 The third annual Flywheel Festival at Bicester Heritage in Oxfordshire brings together more than 100-competition cars for an action-packed timetable hosted on its specially-designed demonstration track. Taking place on the Saturday 24th and Sunday 25th June 2017, the festival will welcome Edwardian chain-driven monsters, vintage Bentleys and iconic Le Mans Jaguars with a programme expected to be substantially larger than in previous years.
Not many competition cars can say they’ve boasted the same engine for more than 70-years, but Julian Grimwade’s 1934 Frazer Nash ‘Norris Special’ is still going strong on the Alvis engine fitted back in 1948. Believed to have taken part in more than 450-events, achieving over 150-wins or first in class recognitions, this is one of the most competed cars in the UK.
One of the backbones of 1950s rallying and British club motor sport, the Triumph TR3 and 3A featured in the early careers of several sporting greats, including Jim Clark and Paddy Hopkirk. Rebuilt in 2002/3, Tom Purves’ 1958 3A example of this exemplary racing model has won Concours, Sprint, Hillclimb and Rally cups in the past 15-years and joins the demonstrations at Flywheel for the second consecutive year.
Fresh from a rebuild, Simon Evans’ 1953 Allard J2X Le Mans is a prime example of motorsport aesthetics shaping competition car design. As debate rages on over the look of modern single seaters and their aerodynamic complexities, so too did rule changes impact on the Allard. Just eleven of these cars were built with the all-enveloping body, after Le Mans changed the rules to eliminate cycle wing designs. This is a rare chance to witness one in action on the Flywheel demonstration track and to see how a small South London manufacturer understood the complexities of aerodynamics and how an interpretation of the rules resulted in a striking-looking sports car.
Alongside the road, sports and single seating racing cars, there will also be a large collection of historically-significant motorcycles. Live action arenas will play host to a wide variety of cars, bikes, aircraft and military vehicles, while the open paddocks provide close access for the thousands of visitors expected through the gates of Bicester Heritage, the UK’s best preserved Second World War bomber station.
Confirmed flying displays include the Great War Display Team dog fights and precision flying from the Tiger 9 team. On the ground, visitors will be treated to an array of pre-1970 music, fairground and shopping attractions.
Richard Grafton, director of Flywheel, noted: “Over the past two years, we’ve worked hard to deliver an atmosphere that really sets this event apart. Flywheel is now firmly-established in the UK's classic calendar because of the quality of cars, motorcycles and aircraft it attracts. Complemented by the spectacular Bicester Heritage setting, visitors can get close to the action in the open-access paddock and stand trackside as hundreds of classic cars, motorcycles and aircraft demonstrate their prowess.”