Classic Camaro Back on Track 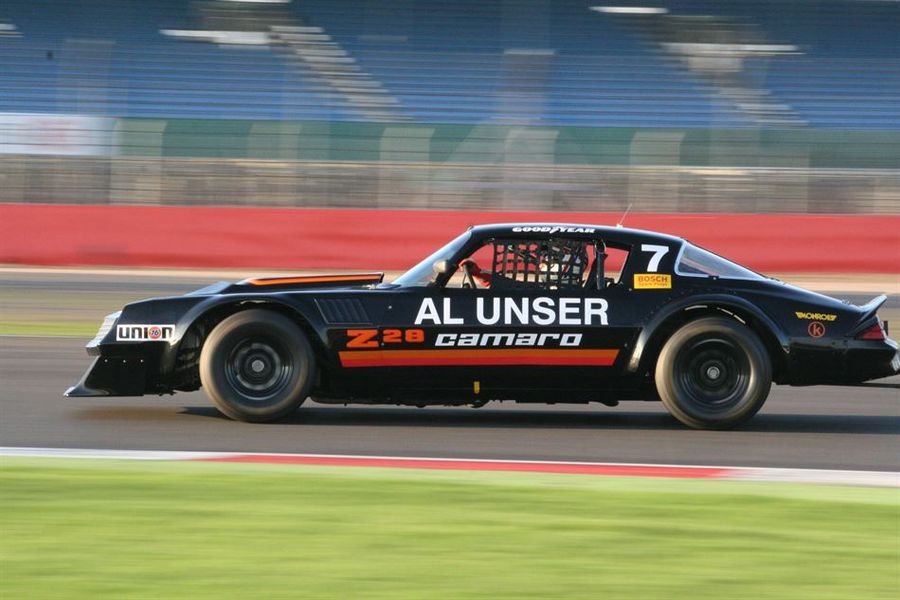 By Matt Upton:
One of the delights of the historic motorsport scene is seeing cars who had their heyday many years ago are back on the track in competition – a prime example being the Chevrolet Camaro of Mike Luck. This is no standard racing Camaro, it was one of the fleet of identical Camaros used for the 1977 International Race of Champions , a US-based series that took top drivers from across a broad spectrum of motorsport and saw them compete at different tracks for the overall title.
Mike’s car was used by ovals legend Al Unser during that season of IROC and bears his name on its current livery, and was out at Silverstone in a support race to November’s Walter Hayes Trophy, qualifying 12th for the Closed Wheel Scratch Race in a damp session before making the best of the dry track in the race to come through to third, it’s first race outing in 15 years.
“In 1977 Chevrolet ran all of the cars in IROC,,” explained Mike, “and by invitation the top drivers from the principle disciplines were invited to come and race. For each race a driver would be given a different car, so it wasn’t just Unser who drove this car. In fact, there’s a long list of drivers, including Emerson Fittipaldi, Mario Andretti and Jacky Ickx.
“It has been in the owner’s possession for about nine years. He bought it off an American collector local to us, who brought it over from the states. It’s more a less as raced in the day, it’s just undergone a process of evolution to get the car to conform to circuit regulations in the UK – noise being the biggest challenge, of course.
“We had to give it a new fire extinguisher system, and cover up some of the equipment that was exposed in the day. For example, the oil tank is sat where the passenger seat would be, so we had to but a box around that.
“We also had to set it up for road circuits, because they were mainly used on ovals in period. Everything was asymmetrical, but all the parts were there so it was just a question of adjustment. The axle had a quick change, drop gear arrangement which was useful, and the gearing was far too low for Silverstone.”
IROC ran from 1974 through to 2006, the opening season seeing Porsches used before the Camaro became the car of choice for the next 12-seasons. In its early years the series even attracted active Formula One drivers such as Mark Donohue, the inaugural champion, and Jody Scheckter. In the final season the series was dominated by NASCAR driver, the series mainly oval-based, with Mark Martin claiming five titles and a record 13 race wins.
Al Unser’s 1977 season wasn’t a great success, his best results in the four race series being two fifth places at Michigan International Speedway and Riverside International raceway leaving him eighth in the final points but $10,500 better off. The title went to fellow Champ Car racer AJ Foyt, along with the prize of $50,000, and NASCAR legend Cale Yarborough was second.
Chevrolet Camaro Mike Luck 1977 International Race of Champions

Jack Barclay Bentley Back on Show