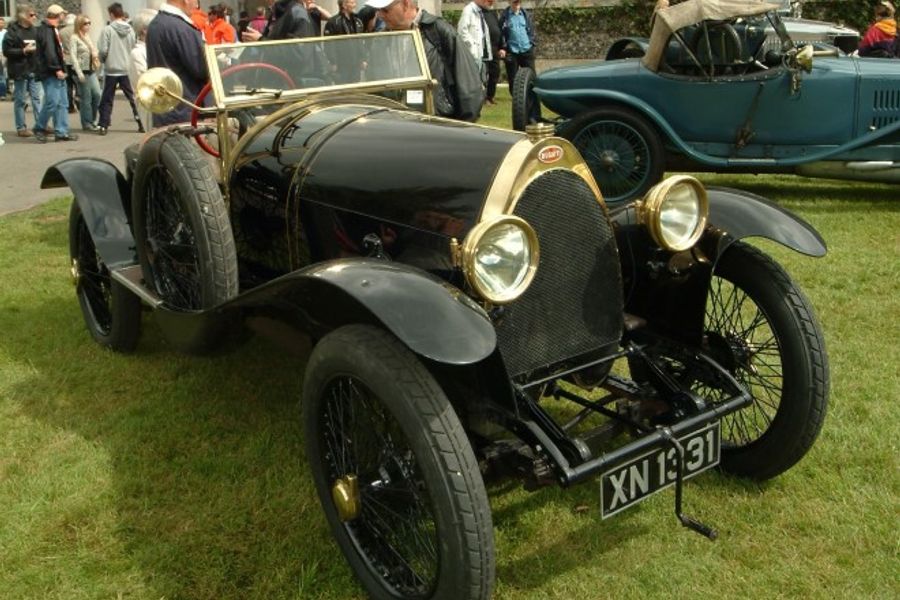 The name of sportsman, record breaker and airman Roland Garros is on everyone's lips as the French Open heads towards its final stages. The great man will also be represented among the celebrations for ‘Speed Kings – Motorsport’s Record Breakers’ at the Goodwood Festival of Speed presented by Mastercard on 4th-7th July.

Garros’ celebrated Bugatti Type 18 ‘Black Bess’ will be a star attraction among a fabulous array of record-breaking cars to tackle the celebrated Goodwood hillclimb in front of an anticipated 200,000 spectators over the weekend.

Although the Festival of Speed is renowned as the go-to venue for global car launches and the opportunity for fans to meet their heroes from Formula 1 to NASCAR and beyond, the celebration of human endeavour runs deep throughout proceedings. Few stories are as adventurous as that of Roland Garros, and his Bugatti embodies more than a century of outstanding achievement.

Garros was born on the island of Reunion in the Indian Ocean, but travelled to Paris to complete his education, where he developed pneumonia and was sent to Cannes to recuperate. Discovering a passion for sport, he became a champion cyclist and accomplished in football, rugby and tennis before the allure of internal combustion carried him to international celebrity.

As an airman, Garros first found fame when he set an altitude record of 12,960 feet on 4 September 1911, then won the 1912 Rome Air Rally. Later, in 1913, Garros became the first man to fly across the Mediterranean Sea from Fréjus-Saint Raphaël in France to Bizerte in Tunisia.

Five days before this epic flight, Garros took delivery of the 5-litre chain-driven Bugatti that was the last word in automotive speed and style. The Type 18 was a thoroughbred competition car capable of more than 100mph, upon which Garros had custom-made coachwork fitted by Labourdette, resplendent in its glossy black paint, with the intention of racing the car with riding mechanic Jules Hue alongside him.

Garros’ motor racing ambitions were interrupted by the Great War, during which he joined the French Air Force. He initially flew reconnaissance missions, but fitting armoured plates to the propeller of his aircraft allowed him to aim a machine gun towards the enemy and at a stroke he invented the fighter plane. Garros and his fellow pilots routinely drove the Bugatti behind the lines until he was shot down in 1915, captured, and held as a prisoner of war for three years. Eventually escaping in 1918, he rejoined the Air Force, but was shot down and killed a month before the end of hostilities, in October 1918.

During the 1920s, the host venue for the French Open was named in his honour while the black Bugatti was bought by one of the foremost women racing drivers of the era, Ivy Cummings, who named it ‘Black Bess’. Miss Cummings won numerous honours in hillclimbs and sprints across Britain for more than a decade, then for the better part of half a century the Bugatti was owned and raced by numerous collectors, including British cinematic legend James Robertson Justice.

Today, the Bugatti built for Roland Garros resides in the word-famous Louwman Museum in The Hague, and will make a rare appearance to honour the pioneering spirit of adventure that will be celebrated at this year’s Goodwood Festival of Speed.

“The story of Roland Garros and ‘Black Bess’ embodies the adventure that has compelled men and women to break records of every kind, whom we shall celebrate at the Goodwood Festival of Speed in partnership with Mastercard,” commented The Duke of Richmond.

“This magnificent Bugatti will be one of the very earliest cars that we shall see being put through its paces this year, alongside landmark cars of each era and the modern stars of today. I am sure that for many people the sight and sound of ‘Black Bess’ pressing on up the Hill at Goodwood will be hugely memorable.”