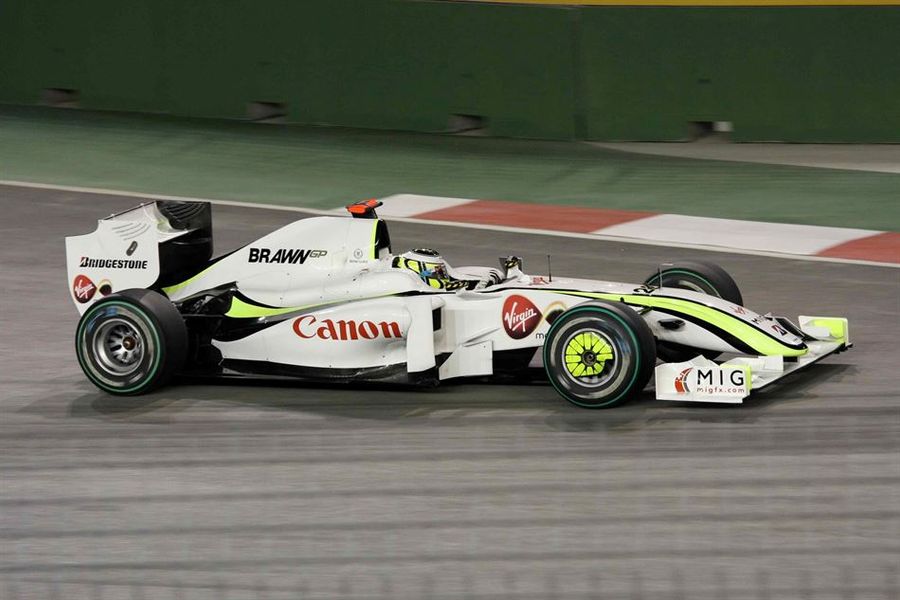 The car in which Jenson Button became Britain's 10th Formula 1 World Champion will be making a return to action at the 2016 Goodwood Festival of Speed. Le Mans winner and F1 star Martin Brundle is expected to take the wheel. The Brawn BGP 001 dominated the first half of the 2009 season, winning six and finishing no lower than third in any of the opening eight rounds, with Button talking all six of the trips to the top step. A further two victories for Ruben Barrichello and two podium visits for Button secured the Constructors' Championship for the brand-new Brackley-based team.
The Brawn team was a late addition to the 2009 F1 grid, rising up from the ashes of the doomed Honda Racing F1 Team. The Japanese pulled out of the sport in December 2008, just three months before the start of the new season. Ross Brawn, the former technical director of the Honda team, and the man who stood side-by-side with Michael Schumacher during his championship-winning years at both Ferrari and Benetton, came to the rescue, buying the team from Honda on the March 6, 2009, three weeks before the Australia Grand Prix, officially changing name to Brawn GP 11 days later.
The BGP 001 was one of three cars, the other two being the Williams FW31 and the Toyota TF109, at the centre of controversy in the run up to the Australian GP, with rivals claiming the 'double-decker diffuser' was illegal, with the argument boiling over to an official hearing between the second and third Grand Prix of the year. The International Court of Appeal concluded that the designs were in fact legal and the appeal was rejected.
The car was instantly quick, becoming the only new constructor to win its two races since Alfa Romeo won the first two rounds of the inaugural World Championship in 1950. With the team operating on limited budget, the car wore varying sponsor names across the season. Having secured both the Drivers' and Constructors', Brawn GP remains the only team to hold a 100% success rate in F1, following the team's sale to Daimler AMG in November 2009, whereupon it was rebranded as Mercedes GP, which recently took Lewis Hamilton to back-to-back titles.
Having not returned a wheel since the end of the 2009 season, Britain's only World Championship-winning car from the 21st century is undergoing preparations for this Goodwood bow, under the watchful eye of Brawn himself. In true Festival of Speed style, it'll be another moment that British race fans won't want to miss.
"I'm absolutely delighted that one of only three Brawn BGP 001s built is coming to the Festival of Speed,” said Ross Brawn. “I've had chassis 002, which is the very car Jenson Button used throughout his world title-winning season in 2009, in my collection since that time and can't wait for it to turn a wheel under its own power for the first time since that incredible season.
"The car was stripped and rebuilt before I took it and has been rarely seen in public since then. Frazer Deane at D3 Racing Solutions is meticulously going over it in readiness for its run up the hill at the Festival and some of the mechanics who worked on the car in period are giving up their time to help run it at FoS.
"I can't think of a better place to show off the car than at Goodwood. The event is remarkable. I've been many times and love getting up close to such important competition cars. In F1 you get very close to your own car, but not to anyone else's! The public's enthusiasm for the history of motorsport is one of the reasons the event is such a success. It's superbly well run and a real history lesson."
Goodwood Festival of Speed Martin Brundle Formula 1 World Champion Jenson Button Brawn BGP 001