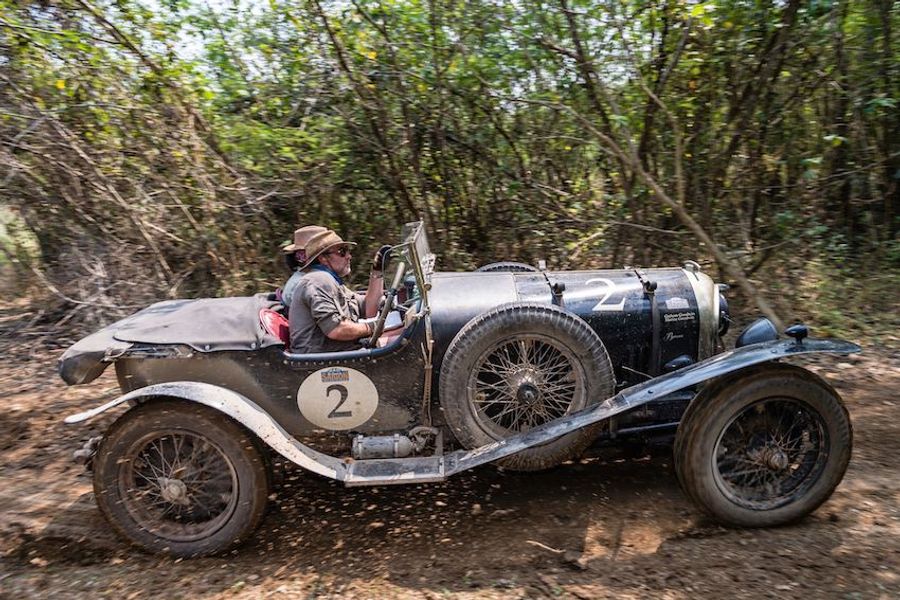 The 1925 Bentley Super Sports of Graham and Marina Goodwin reigned supreme on the Endurance Rally Association’s The Road to Saigon rally. Holding their lead on the Vintageant category from the start line in Singapore on February 4th right the way to the finish in Saigon or Ho Chi Minh City as it is now known on the second of March.

Rallying over 8,600kms in 27-days, around 35 crews took on a series of challenging regularity and speed trials as they journeyed through Thailand, Cambodia, and Vietnam.

The Classics division was won by Marco Halter and Claudia Engelhardt in the 1963 Ford Falcon, who had fought a close battle with runners up Gerry Crown and Matt Bryson, former Peking to Paris winners, in the 1974 Leyland P76. Third place was secured by David Gainer and Kerry Finn in the 1972 Datsun 240Z.

Collecting their trophy, Halter acknowledged the importance of this, his first win and declared that he has two heroes in classic rallying. Of runner up Gerry Crown, who is still competing at 88 years old, Marco said: “I wish I can drive as fast as you when I’m as old as you. You’re a fast driver and a fast drinker.”

Marco’s other heroes were Karen and David Ayre who he thanked for bringing their beautiful 1907 Itala to the event. A regular on the endurance rally scene, the Itala battled all the way from Singapore to the Prek Tamak Bridge, 40km north of Phnom Penh, Cambodia, where on day 22 disaster struck. They broke a left-hand side half shaft and lost a wheel. There was nothing to be done by the side of the road save arrange a recovery truck to take the car to Saigon.

The Spirit of the Rally award went to Russell Jordan and Bill Crossan for their efforts in the 1967 Austin Healey 3000 whilst the Against all Odds award was taken by Adrian Hodgson and Eric Sia in the 1975 Peugeot 504 Ti for battling their way back into the rally after having major mechanical issues that saw them detour to Kuala Lumpur.

The competitors were joined at the half-way point by four novice crews of famous faces, working with Optomen Television and BBC Two for a documentary to be aired later in 2018. Original Top Gear presenter Noel Edmonds and his wife Liz; musical husband and wife team Martin Kemp (of Spandau Ballet) and Shirlie Kemp (of Wham); chef Andi Oliver and her TV presenter daughter Miquita Oliver; and close friends and musicians Tinchy Stryder and Jordan Stephens (of Rizzle Kicks) competed in the final 12-days of the event.

The Endurance Rally Association’s next event is the tenth anniversary outing of the Flying Scotsman rally for pre-war cars, with over 100 vehicles departing from Brooklands Motor Museum on Thursday 26th April.

Over four days, the crews will rally through the Home Counties before heading north into the East Midlands before swinging east through the Lincolnshire Wolds. Then it is across the spectacular moors and dales of Yorkshire to the wilds of Northumberland and the Scottish Borders before a triumphal arrival at the Balmoral Hotel in the heart of Edinburgh. The finish line is appropriately close to Waverley Railway Station, the original destination of the rally’s illustrious steam powered namesake.