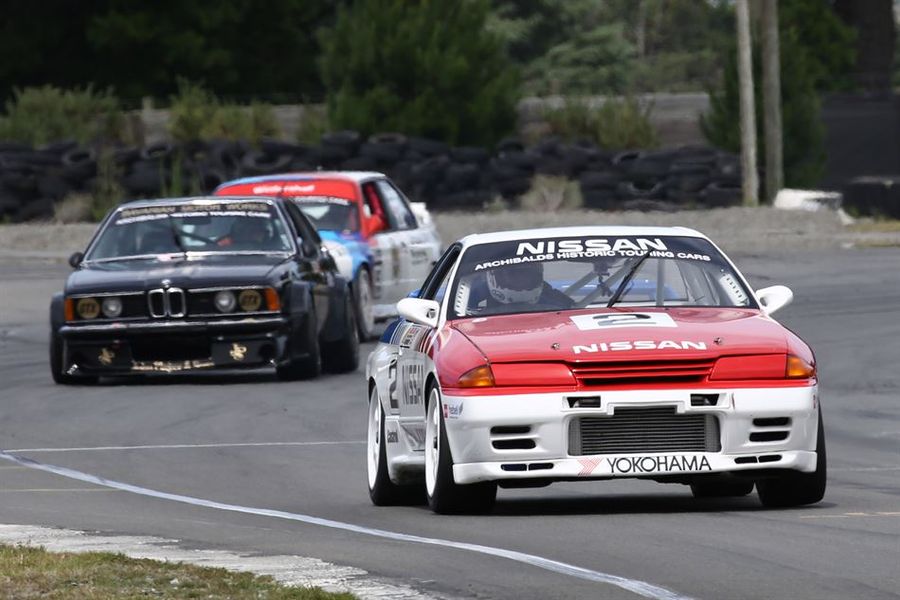 He built his car as a tribute to the Nissan Skyline GTR Mark Scaife raced in the Australian Touring Car Championships in 1990, and at the big Skope Classic motor racing meeting in Christchurch over the weekend, its builder and driver, Stu Rogers, put on a race-winning display worthy of the Australian great.
Despite little previous racing experience on four-wheels, the former motocross racer raced wheel to wheel and twice beat to the finish line, Scaife’s former of the time, Jim Richards.
“It’s certainly been a brilliant weekend,’ the modest North Canterbury motorcycle repair business owner said as friends and family gathered in the Archibalds’ marquee to congratulate him. “I can’t believe it, myself.  The car went brilliantly and I managed to get the most out of it out on the track. I’m still up there on cloud nine at the moment and I’d like to dedicate the success I’ve enjoyed this weekend to my Dad. He , Mum and my wife have supported me all the way with this project and the dedication is my way of acknowledging everything my Dad has done for me in my life which has helped get me to this point.”
After qualifying the self-built Skyline in fourth place on Friday, Rogers finished a close second to the Peter Sturgeon-owned Group C-spec BMW 635i CSI driven by Jim Richards in the first Archibalds’ series race on Saturday morning then claimed his first win – over Richards, Australian guest driver Charlie O’Brien (in Murray Sinclair’s Nissan Primera Super Tourer) and BMW drivers Arron Black (E30 M3 2.3 Gp A) and Bruce Miles (BMW 320li 2.0-litre Super Tourer) – in the second race in the afternoon.
Richards managed to find a way past to take a late race lead and win the third race from Rogers, and the BMWs of Miles, Dale Chapman, Black and Andrew Buist. But the final was another Rogers/Nissan GTR benefit, it’s driver seemingly increasing in confidence with every lap to eventually cross the finish line almost five-and-a-half seconds in front of Richards with Black a close third and Charlie O’Brien (who for Sunday’s two races had swapped to Peter Sturgeon’s ex Brancatelli 2.3 litre Gp A BMW E30 M3 after engine mount issues put the Sinclair Nissan Primera Super Tourer back on a trailer.
Despite jumping in at the deep end (with no time or even chance before the first Sunday race to familiarise himself with the car), O’Brien worked his way from the rear of the grid to eighth place in the morning race on Sunday, then from eighth to fourth and closing in the final.
Queenslander O’Brien, an all-rounder who has raced at the top level in Touring Cars across the Tasman - as well as here in the Porsche GT3 Cup Challenge series – said he thoroughly enjoyed racing both cars and if asked would be back - like a shot - to drive either again.
“Absolutely, that was a hell of a lot of fun, driving it as hard as I was," he said of his charge up through the field in the BMW M3 in the hard-fought final. “Obviously in the first race I didn’t know what gears to use in the various corners but  in that race I didn’t miss a gear. I knew I had to have it in first gear for the hairpin and I was more on top of it. It was good and I would be happy to drive it again if asked....”
Having enjoyed his most successful (in terms of race wins) round so far behind the wheel of Peter Sturgeon’s  GP C-spec BMW 635 CSi,  Jim Richards was also very positive about the time he has had ‘back home.’
“It’s been another great weekend,” the man they call ‘Gentleman Jim’ said.  “The car ran faultlessly and I thoroughly enjoyed driving it. I wouldn’t do it if I didn’t enjoy it.”
Behind Rogers and Richards Dunedin ace Arran Black - who qualified second quickest - ended up best of the BMW E30 Gp A/E36 Super Tourer runners, despite using the team’s smaller 2.3 litre engine in his E30 M3.  Black was never far behind the leading duo and briefly got past Richards and into second place in the final race.
Christchurch car dealer Bruce Miles also seemed to get better and better as the weekend went on driving his E36 BMW 320i Super Tourer only to retire late in the fourth race. Dale Chapman and fellow Cantabrian Andrew Buist were rarely more than a few car lengths apart no matter which race it was in, but in the wash up in the final race it was Buist who got to the line ahead with Chapman sixth and Kevin Pateman in the first of the  NZ2LTC-spec cars, the familiar red Ford Telstar the Timaru driver raced in period, seventh..
Eighth, meanwhile, after his strongest race of the weekend was local legend Trevor Crowe in the GP A spec 635 CSi BMW he raced in period - with Archibalds' backing no less.
Crowe showed real tiger, as he worked his way forward, saying afterwards that “You have to remember, I’ve been doing this for a while now!”
Finally, Steven Kelly’s NZ2LTC Series ex Brett Riley BMW 320i was showing the effects of a partial tyre delamination in testing on Friday but it didn’t affect the Dunedin man’s pace , or enjoyment of the racing over the weekend in the Archibalds class.
“I’ve had a fantastic time,” he said.’