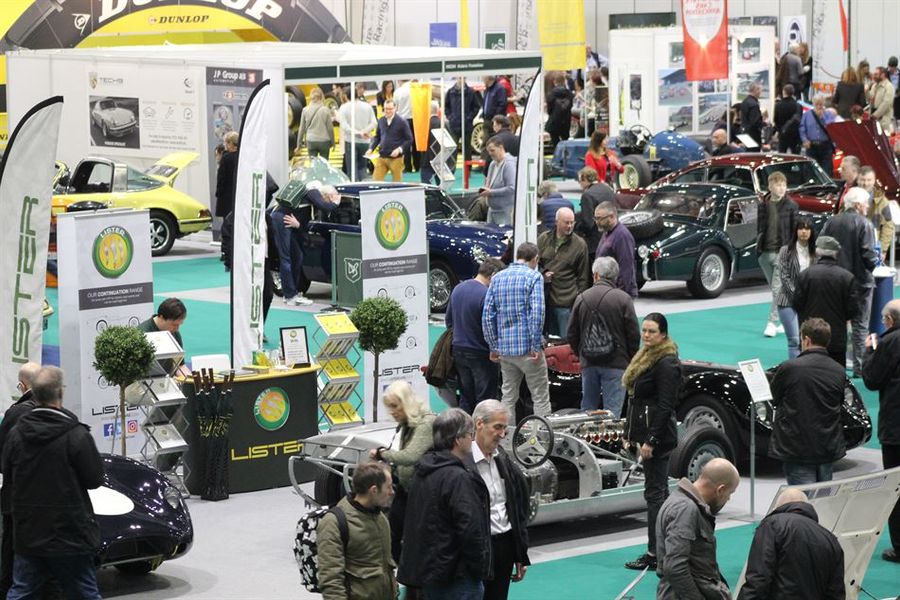 You wait all year for a British historic motorsport show then two come along on the same weekend. That was certainly the feeling in the last few months once it was known that the established Race Retro had a new rival and that they were on pretty much the same dates – Historic Motorsport International starting just a day earlier last Thursday.
Neither show would have chosen to clash (why dilute your potential paying public?) so with venues usually being booked many months in advance, it was mostly likely a result of the decision to create HMI to run alongside the existing London Classic Car Show. HMI reported an attendance of 37,000 on Sunday evening, though it is worth noting that so did the London Classic Car Show so this is most likely a combined figure, but still 10% higher than the latter achieved in 2016, and while we have yet to see a footfall figure for Race Retro, it was pretty busy on Saturday when we were there with cars queuing to get in on nearby roads.
Two shows gaining good attendance on the same weekend would suggest a healthy British historic scene, though it does look like the shows are targeting separate audiences.
HMI was certainly looking for the big names, you had an extensive Silverstone Classic feature, European promotor Peter Auto and Coys, Cosworth Dunlop and other famous ‘brands’ – all in bespoke displays or nicely fitted out standard stands. Then again, this is an event sharing a venue with a classic car show where one dealer reputedly did £1.4M of business in a day last year, so standards have to be kept if the high net worth individuals working in London’s finance houses just up the road are to be kept coming.
Even though this was the first year under a new organisation Race Retro also seems to know it’s audience, and can attract a good crowd if Saturday was typical. The show had some of the leading names there, the HSCC (who were also at HMI), the VSCC, 750 Motor Club etc., but also seems to step down in vision through each hall until you end up at what is virtually an autojumble. That is a feature of the venue though, the somewhat odd environment of Stoneleigh Park centrally located but with a mix of purpose built buildings.
That does mean that Race Retro was able to offer many things that HMI could not. Way more artists offering their own work, more book and memorabilia sellers, in fact, many more ways of spending your money – there was even a pie stall and as for the gentleman and his range of cheeses…
Both shows featured a ‘live’ element. In this Race Retro won hands down with its popular rally stage seeing many classic cars and drivers pushing hard enough for there to be the occasional ‘off’. There were some competition cars on show during the parades at the London Classic Car Show – but they were strictly first gear affairs, and probably couldn’t be anything else as they were indoors right in the midst of the main show area.
That does highlight an oddity of the two London shows in that there was the odd historic race or rally car – and an entire feature of the cars of Jacky Ickx – tucked away in the London Classic Car Show when across the central atrium HMI could have happily accommodated them and benefitted from it. Word is that next year both shows will be on the same ‘side’ of Excel so it will be interesting to see how that works out.
So, what do we hope for next year? Hopefully we see the shows on different weekends. We attended both but it would be good to know how many other people did. Both have their target audiences with a large overlap, and which to go to would depend on geography, your interests – Race Retro much bigger on its rallying heritage – and it will be interesting to see what happens in the coming months as each looks back at its weekend, at what the other event achieved, and reacts accordingly.
Historic Motorsport International HMI Race Retro

The Strange Tale of the Real Replica