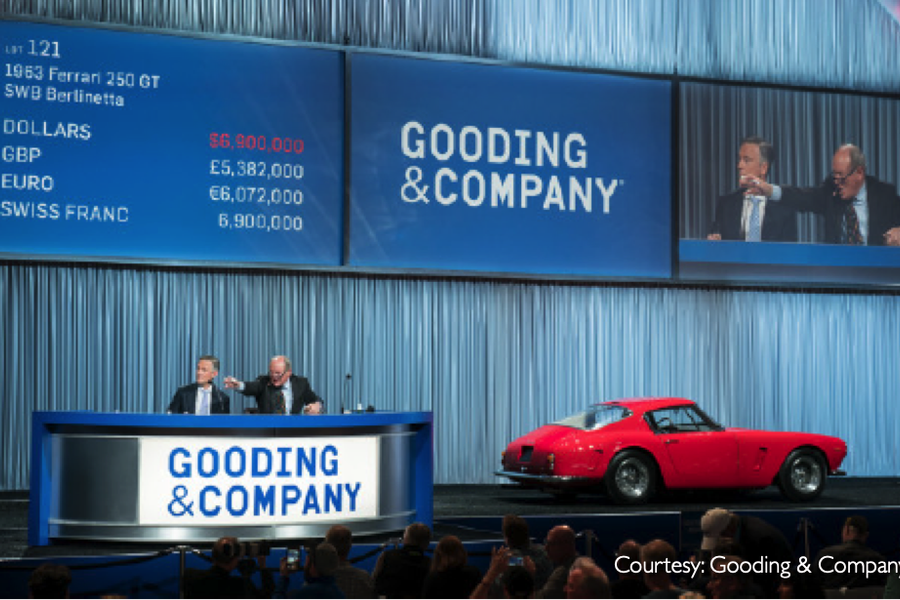 It is July and The Goodwood Festival of Speed is in the rearview mirror so that means focus of the collector car world and vintage and historic racers will begin shifing to the annual trip to Monterey California and the two weekend Monterey Pre-Reunion and Historic racing Reunion at the famed Laguna Seca raceway as well as the iconic Pebble Beach Concours d’Elegance. Before we look ahead to Monterey Car Week, it is the perfect time to examine the first half of the year’s auction results to see just how the market is doing and what cars are bringing the loudest bangs from the gavel and what that might mean for the second half of the year.

This is in no way scientific.  We have chosen eight auction houses to compare year to date performance for 2018 and 2019 as best we could given schedule adjustments and deletions.  Our list covers a combination of high volume houses, (Mecum & Barrett-Jackson) as well as those who’s reputations encompass more that just cars but high end art and other desirables, (Bonhams, RM Sotheby’s and Gooding & Company) and some of the smaller boutique auction operations, (Russo & Steele, Artcurial and World Wide).

Over all sales for our eight houses are down just over 26.5 million dollars for the first half of 2019 as compared to one year ago. However a deeper dive into the numbers shows that the decline is more associated with size of auctions and the number of events – (2019 saw only 25 auctions in the first half of the year apposed to 28 events one year ago) - and less due to a decline in value or interest in the collector car market

Sales realized by the high volume houses are actually up just over 16 million for the first half of the year. Nearly all of that stems from Mecum, and a huge increase in sales by moving their biggest March event from Kansas City to Phoenix.

The big name, smaller volume houses are lead by RM Sotheby’s.  RM is up slightly in 2019 about 500 thousand, as they saw 21 million dollars worth of cars going to new homes in just four events. The big seller for RM this spring was a 1987 Ferrari F40 LM in BPR livery that went across the block in Paris for over 5.4 million dollars.

Bonhams too saw a dramatic decline of 32 million compared to 2018.  Growth at Amelia Island and Goodwood could not offset declines in Phoenix and Paris combined with the change of the Monte Carlo auction to a Aston Martin only event that saw less than 50% of the cars offered realizing any sale dollars.

For the boutique houses sales fell off just over two million dollars for the first half of 2019. Lower numbers for Russo and Steele (down just over six million) and Worldwide (down just less than two million) were balanced by a strong first half of the year for Artcurial. The Paris based auctioneer saw their business grow by just under six million over a year ago. Those gains were driven by the first half ‘s biggest sale, the 1939 Alfa Romeo 8C 2900 B touring coupe that sold for 18.9 million dollars.

Just like many racing series, the Auction world is also broken down by seasonal and geographical trends. The year begins with the Arizona events.  Then in March, Amelia Island becomes the center of attention for the collector car market.  May sees the focus moving to Europe.  Paris, Monte Carlo and Goodwood are some of the featured locations.  Then in August nearly the entire collector car world descends on Monterey and Carmel California around the Monterey Historic Reunion weekends and the Pebble Beach Concours d’Elegance.

A look at Arizona, Amelia Island and the early European events shows some interesting contrasts from year to year.  The Arizona events and Amelia Island sales were relatively steady.  While Arizona numbers were 2.5 million dollars lower Amelia Island auctions realized a 500 thousand dollar gain.  Gross numbers from the European auctions show a huge drop off of 29 million dollars but those numbers are extremely misleading because of fewer events in 2019.  Last year featured nine European auctions in the first six months with only five this spring. In reality the per-event numbers showed a big improvement from 16.5 million a year ago compared to an improved 23.9 million for 2019.

So what does it all mean? While the overall numbers might be down they are still stunning. The eight auction houses we surveyed combined for nearly three quarters of a billion dollars in sales (720.9 million) from 25 events. All auction houses combined would in likelihood top the one billion mark.

As we head into the August auction blitz that is Monterey Car Week, the numbers should be big and expectations are high.  One year ago Monterey and Pebble Beach auctions realized just under 347.5 million dollars which is more than half of this years first half total. Those big numbers were lead by the earth moving sale at the RM Sotheby’s auction of the 1962 Ferrari GTO Coupe for 48 million dollars.

As we will see in coming previews here at HistoricRacingNews.com, this year’s events will continue to impress with some choice vehicles under the hammer. The early headliner comes from Gooding & Company, a 1975 Ferrari 312T (Chassis 022). This is the car that carried the late Niki Lauda to victory in the French Grand Prix and eventually to his first world title.  Given the recent passing the legendary driver combined with the fact that Ferrari still remains the marque that can demand the highest auction values, this car could break all kinds of records.