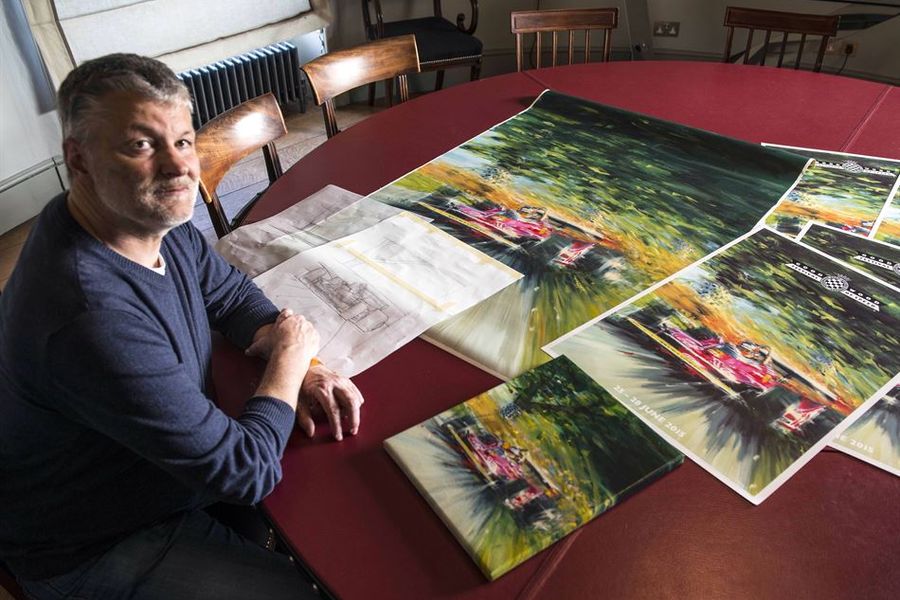 This year’s Festival of Speed theme is ‘Flat-Out and Fearless: Racing on the Edge’ and Klaus has chosen a man whose life sums up this philosophy better than almost any other motor sport figure, Gilles Villeneuve, to illustrate this on the 2015 poster. A technical illustrator by trade, Klaus began painting racing cars in his spare time, but sprang to prominence when he won a contest to design the official poster for the Mille Miglia revival event in 2000 with his study of a Mercedes SSK at full speed.

Since then the Austrian has designed the official posters for the Daytona 500 NASCAR race and the Paris Retromobile, exhibited his work at the Goodwood Festival of Speed and Revival plus the Pebble Beach and Amelia Island Concours d’Elegance events, and is currently a member of the Automotive Fine Arts Society. Klaus’s style is to begin each artwork with a technical drawing. From there he gradually deconstructs the picture, leaving only the essential elements and effectively turning it into a sketch, before colouring from back to front with acrylic. The whole process takes just two days.

Klaus calls Villeneuve – one of the most spectacular drivers ever to climb into the cockpit of a racing car – “Formula 1’s ultimate wild boy”. This made him the perfect subject for the 2015 official event poster, which depicts the Canadian in his 1979 Ferrari 312T sliding through the first corner of Goodwood’s iconic 1.16-mile Hillclimb.

"Right from the outset in 1993 our idea for the Festival of Speed poster was for a beautiful motor sport painting," explained Lord March, "rather than any hard sell. So we have always kept it simple and given the artist as much freedom as possible. Peter Hearsey famously succeeded in this for an incredible 22 years and the artworks he created for us are synonymous with the Festival of Speed. I am delighted to say that in Klaus Wagger we have found exactly the right man to carry on this great Goodwood tradition into 2015.”

“In an age when many organisations are turning towards photography," said Klaus Wagger, "it is people like Lord March who keep automotive art alive. Working for Goodwood is the pinnacle of the motoring art world and it’s very cool to have the honour to design this year’s Festival of Speed poster. Peter Hearsey has always done a fantastic job and his work has played an important part in my life and career, so it’s an honour to have this opportunity.”