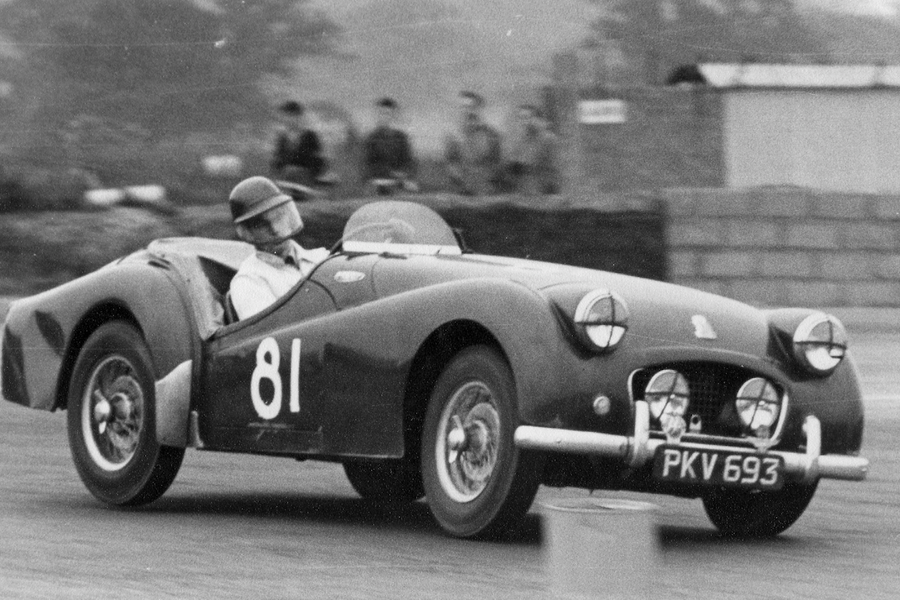 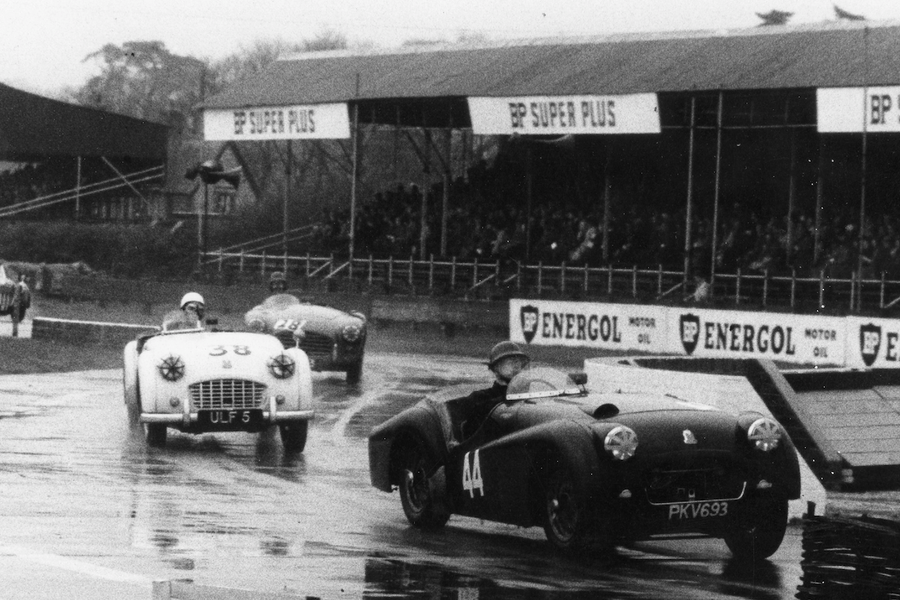 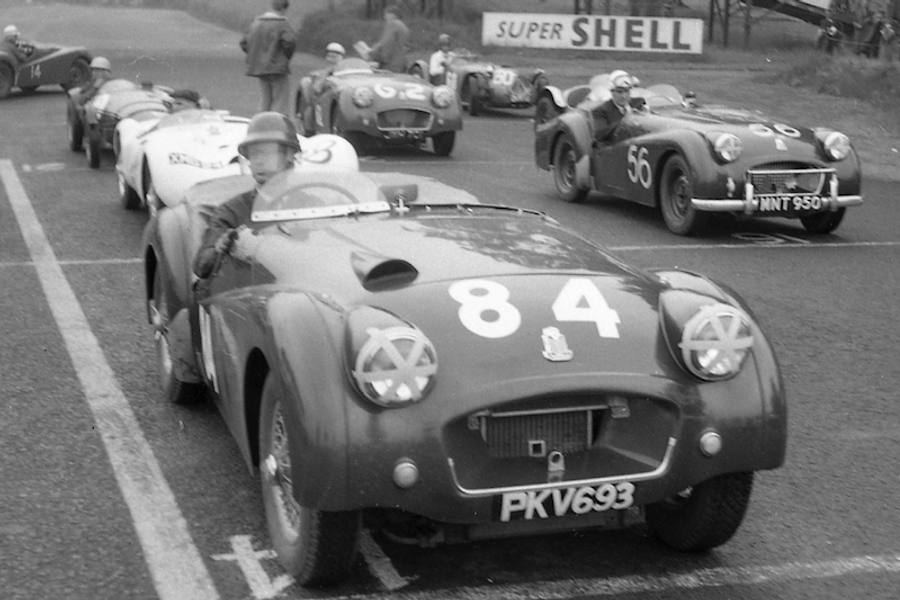 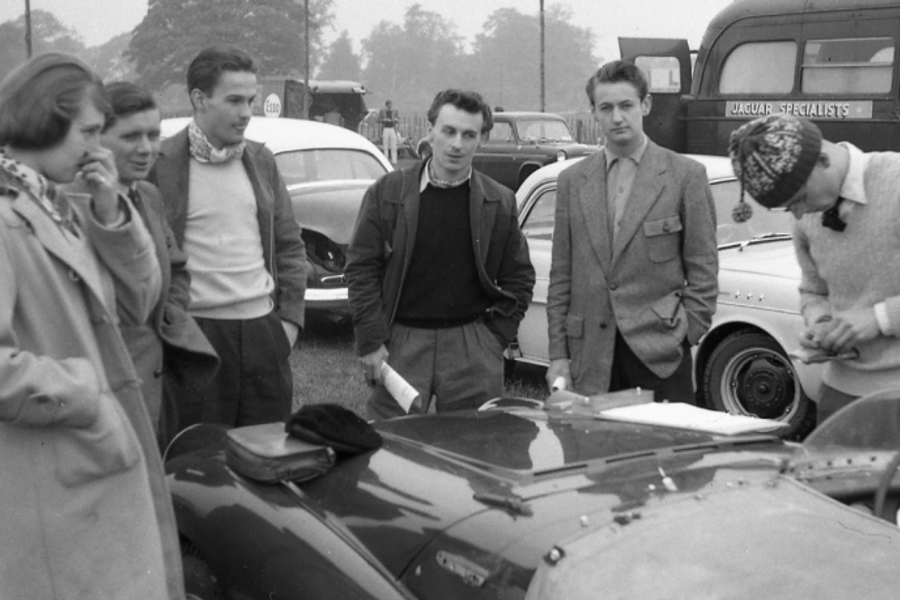 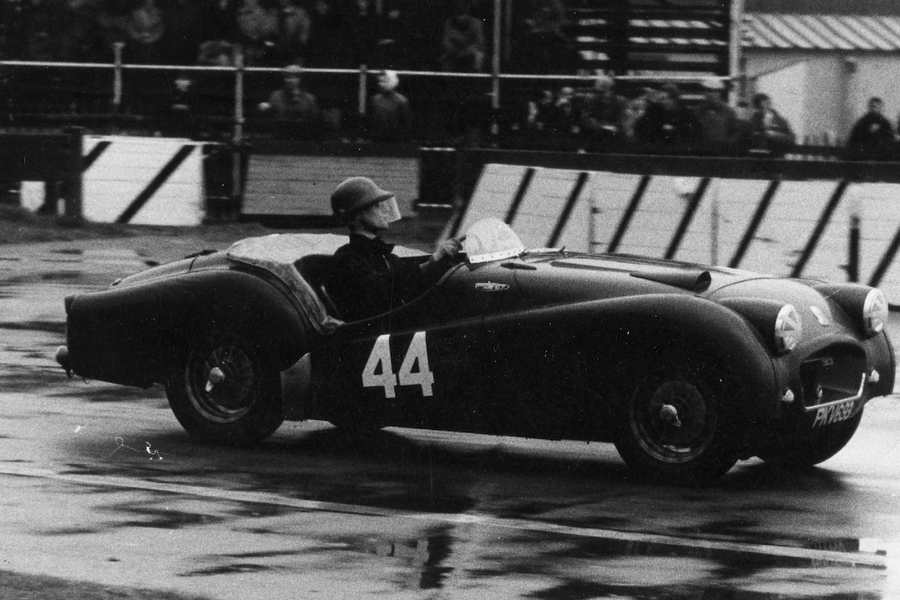 Sometimes it is hard to think back on just how an abiding passion started, but my lifelong love of motor racing started in Chester in 1957. My cousin, Mike Hurn had always been a car nut and when his old Aston Martin International cried 'enough' he cast his eyes around for something newer.

These were the days when old cars were just old cars and not 'classics'. Mike's father was well connected in the motor trade and knew of a press demonstrator Triumph TR2, which had also been pressed into service to compete in the Tulip Rally with 'Autosport's' founder Gregor Grant at the wheel.

The car was duly acquired and before long Mike decided to go racing. Outings at Aintree, Goodwood, Brands Hatch and Silverstone saw Mike growing in confidence in the standard, road going Triumph. In common with nearly all his competitors, Mike would drive to the circuit, race and then drive home. 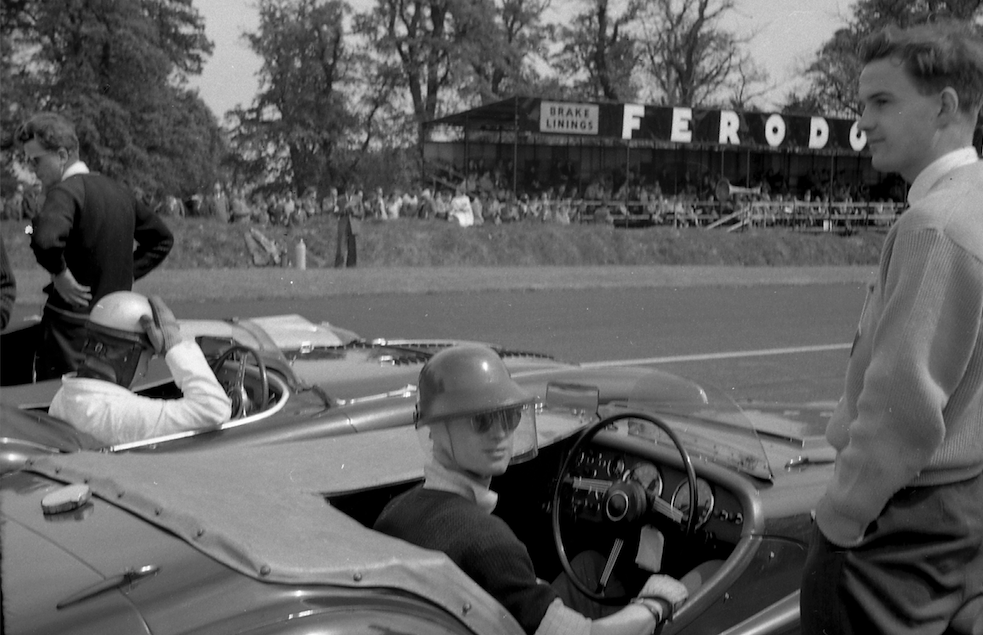 When I was a child my family lived in Chester in the north west of England, near to Oulton Park race circuit and it was a big day when Mike entered a race there. For reasons lost in the mists of time, we didn't attend the race but instead got a telephone call on Saturday afternoon which started with: "I'm OK but I've had an accident". 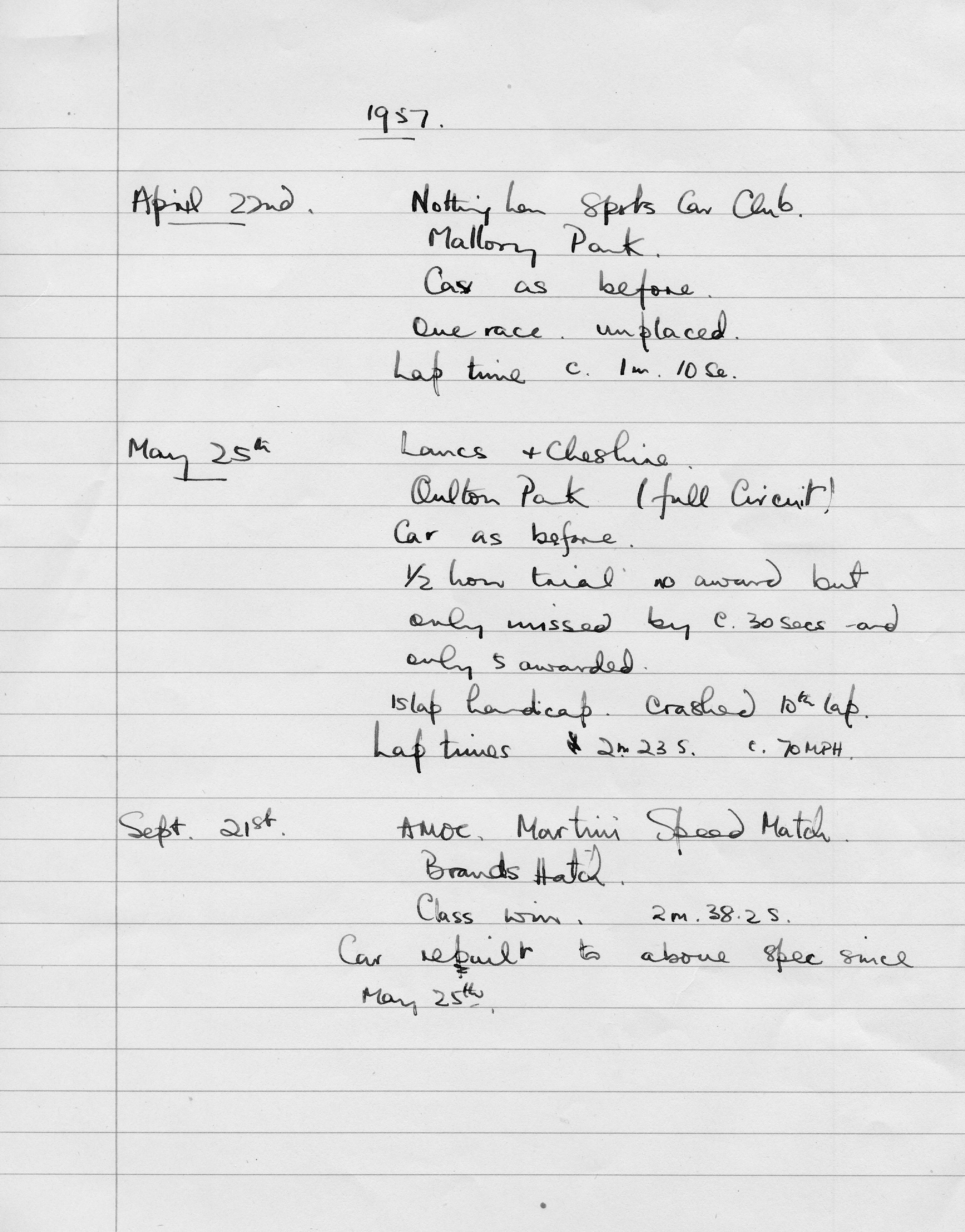 The newly extended circuit now had a tight hairpin called Esso Bend (ironically now known as Shell Oils Corner) and Mike turned the car over during the race, (see the accompanying video below for the full story from Mike). The hapless driver needed to get back to London and British Rail was his only option; could he have the car trailered the 15-miles to our house for a few days until it could be transported back to the Triumph factory for repair? 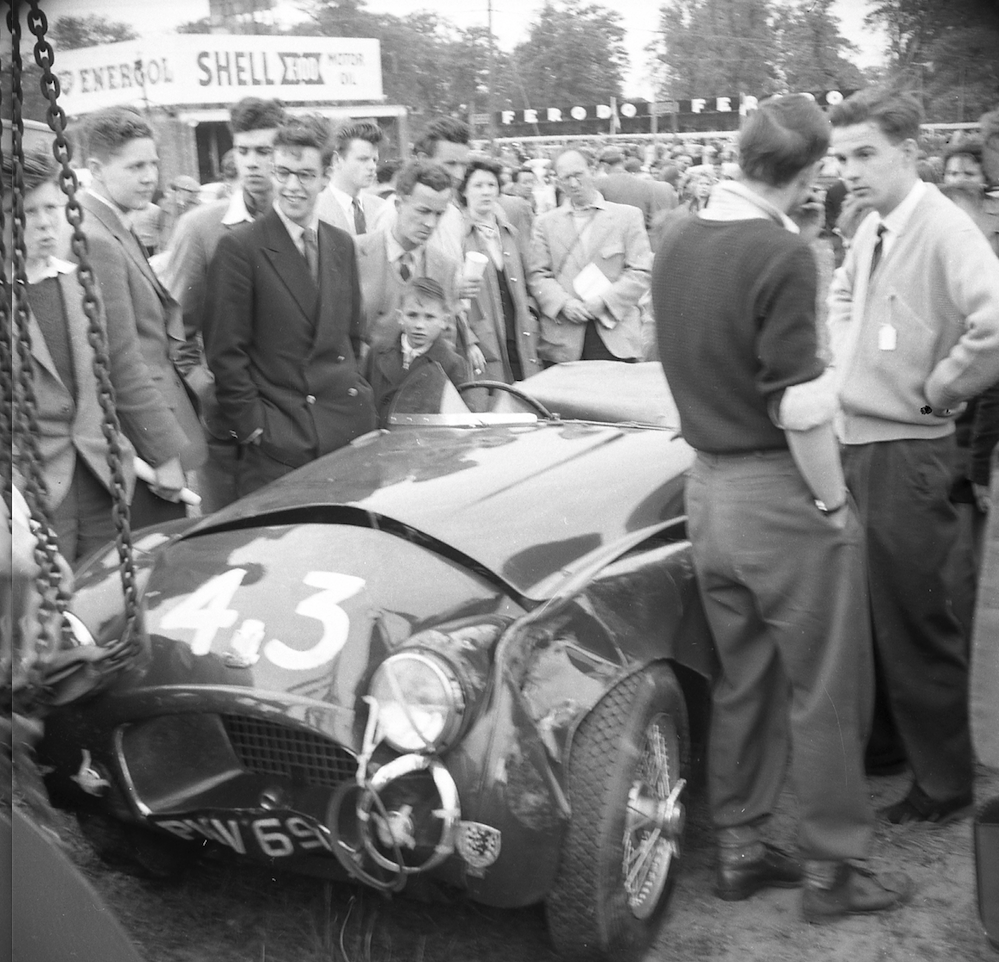 My parents duly agreed and the battered racer took up residence in our garage. Every day, as a five-year-old, I would go and sit in it and dream of being a racing driver, and that is where my lifelong passion began.

It was over a very pleasant lunch with Mike and his brother Roger, now both in their eighties, that discussion turned to the TR2. I mentioned that there were several TR2s still racing and I had wondered if, hope against hope, the car was still around. Did the brothers remember the registration number of 'their' car? As quick as a flash "PKV 693" was the answer.

Some sleuthing on my part showed that the car had recently been owned and raced by Fender Broad, specialists in this type of car. A quick phone call to Neil Fender told me that the car had been sold and that it had gone abroad, although it wasn't really clear where it had ended up.

Fast forward to February 2020 and Retromobile in Paris. I had regaled my son Nick (who produces all the HRN videos we run, including the one featuring this car) about the TR2 and, when I saw such a car, from the side, being exhibited at the show, I was just about to say "that's like Mike Hurn's car". 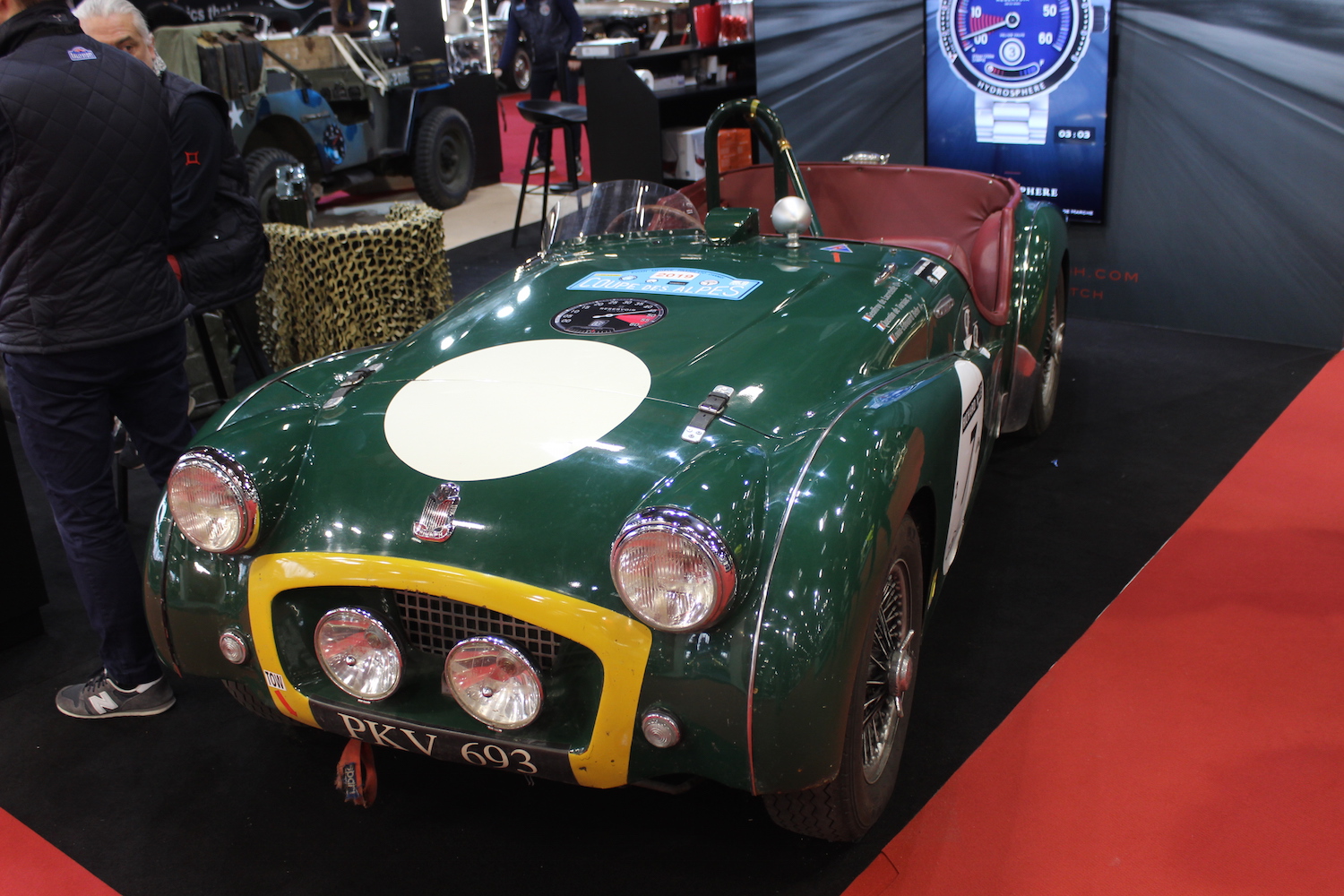 As I approached it, the magic PKV 693 registration plate appeared before me. I had found cousin Mike' s car! The new owner of the car, Geoffroy de Lacretelle, was as surprised to hear my story as I was to find the car!.He lives in Paris but the car is kept in Brittany and we have put plans in place to re-unite the car and its first racing driver owner, hopefully later this year.

Happily I phoned Mike to tell him the news and we met shortly afterwards to have yet another lunch. This time I was surprised yet again as the erstwhile owner had kept every programme, photograph and invoice for the car (including the rebuild cost after the accident!). The circle is finally complete.

Podcast: Marcus and the Team Meet the HRDC's Julius Thurgood

Video: HSCC Chairman Frank Lyons on the Club, its Members and the Future