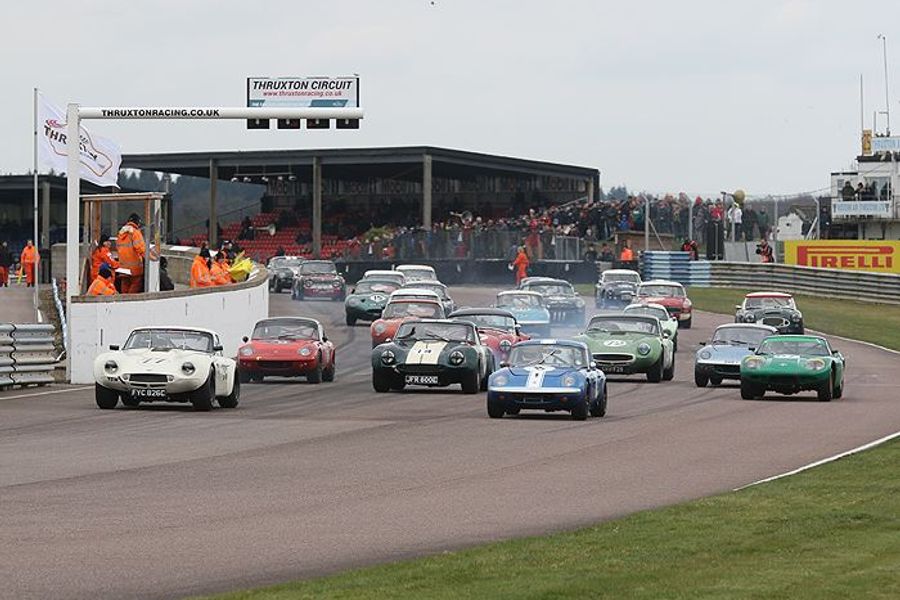 A superb weekend of racing at Thruxton got the 2015 racing season for the Historic Sports Car Club off to a flying start over the Easter weekend (4/5 April). Headlining the action was the stunning spectacle of the Hesketh 308E Grand Prix car of Michael Lyons taking a double win in the Derek Bell Trophy.

Saturday’s programme included an absorbing contest in the GT section of the Guards Trophy as the mighty V8s battled for the length of the 40-minute pit-stop race.  Although John Spiers retired his TVR Griffith mid-race, the battle between the similar car of Mike Gardiner/Dan Cox and the AC Cobra of Robert Bremner raged all the way to the flag. Gardiner took the first stint and later handed his TVR over to Cox with a small lead as Bremner ran solo in the Cobra. Into the closing stages Bremner chased hard and was close enough to attack with two laps to run. The cars were almost side-by-side into the chicane but Cox held on and the margin was only four-tenths of a second after 26 laps.

“What a brilliant race,” said Gardiner. “It’s lovely to be racing with the HSCC,” added Cox. “It was great fun,” added Bremner who made the long journey from Scotland worthwhile with a fighting second. In Sunday’s Guards Trophy sports-racing contest, father and son Stuart and George Tizzard were top of the championship contenders in their Lenham Spider.

Lyons was peerless in the Hesketh in the pair of Derek Bell Trophy races and wowed a healthy crowd with the spectacle of a hard-driven Grand Prix car in full flight. His best lap was at an average speed of more than 125mph. As expected, Lyons romped clear of the rest of the field as Richard Evans led the pursuit in his Formula Atlantic March 79B.

Another rising young star shone through in the pair of races for the Historic Formula Ford Championship. Back in the family Merlyn Mk20 after the car’s major rebuild was Ben Mitchell and he won both races in fine style as battles raged all down the order. Max Bartell and local hero Tiff Needell battled hard in Mitchell’s wake, but the big star of Sunday’s race was novice racer Richard Mitchell who finished a very impressive second overall to Mitchell after a fine battle with Bartell, Needell and Simon Toyne. Needell pipped Toyne by a thousandth of a second as four cars crossed the line in the space of three-tenths of a second.

The Historic Formula Ford 2000 Championship season opened with a tremendous race, which featured a three-way battle for the lead. However, Callum Grant spun his Delta into the chicane and a couple of laps later Andrew Park (Reynard SF81) spun at the complex to leave Tom Smith (Royale RP27) with a slender lead. Meanwhile, Grant was fighting back into contention but his challenge was blunted when the Delta shed its rear wing. He dropped to fourth behind Ben Tusting (Reynard SF79) and Park. In the second race on Sunday Grant turned the tables on Smith.

Other single-seater victories fell to Peter Morton in Formula Junior and Ian Jones in Classic Racing Cars, while Ian Pearson drove superbly in his FF2000 Van Diemen to twice win in the combined Classic F3/Classic FF2000 Championship races. F3 newcomer Gaius Ghinn came through to second overall on Sunday in his debut weekend with a Ralt RT3.

Tim Davies opened his Historic Touring Car Championship title defence with a pair of wins in his Lotus Cortina, while James Dean (Lotus Europa) topped the 70s Road Sports Championship opener. After starring with third place in both Derek Bell Trophy races, Mark Charteris added victory in the Classic Clubmans race to his impressive weekend in his Mallock Mk20/21.