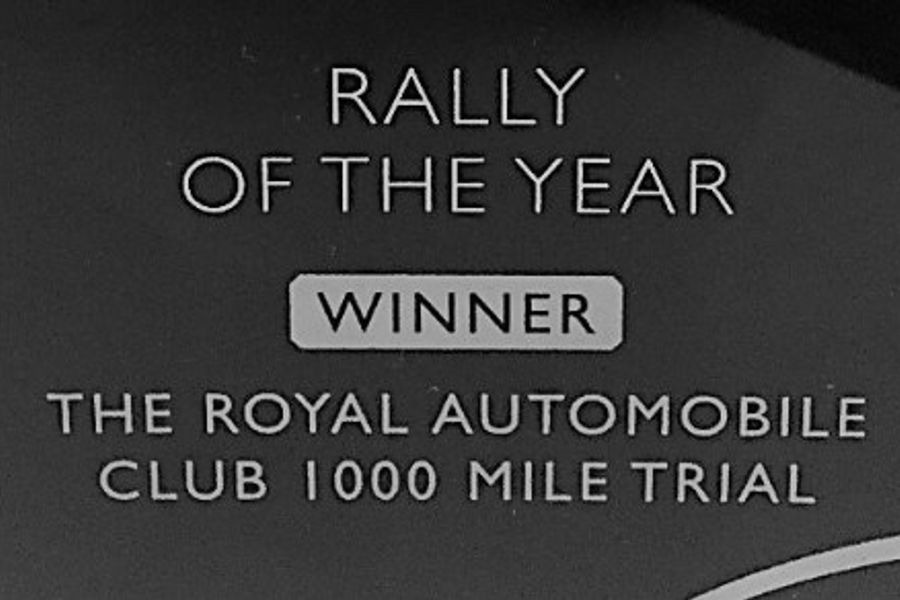 The Royal Automobile Club 1000 Mile Trial won the 2018 Rally of the Year Award at the International Historic Motoring Awards, which took place on Thursday 25th October 2018 at the Sheraton Grand London Park Lane hotel. The International Historic Motoring Awards recognises and celebrates the skills and achievements of the worldwide historic motoring industry and comprises of a broad spectrum of award categories ranging from Restoration of the Year through to Motorsport Event and Personal Achievement awards.

Jeremy Vaughan, Head of Motoring of the Royal Automobile Club said, "We are delighted to have won Rally of the Year Award against such a high calibre of contenders. I would like to thank our event partner, HERO Events, for their expert organisation and challenging routes, which keep the participants on their toes. The event has won this award three times and it won the FIA Heritage Cup in 2015 so its wonderful to add another accolade to its illustrious history".

The Royal Automobile Club and the Historic Endurance Rallying Organisation (HERO) partnered to revive the 1000 Mile Trial in 2014. The original 1000 Mile Trial, organised by the Automobile Club, was a demonstration trial held in the spring of 1900, from London to Edinburgh and back again. This event demonstrated the robustness and versatility of the motor car, in the process proving the doubters of the motor car wrong. It was a truly historic moment in the popularisation and development of motoring as we have come to know it.

The 2018 Royal Automobile Club 1000 Mile Trial set the standard for all other pre-war motoring events. With over one thousand  miles of the best roads in Britain, 27 regularities, 19 tests and over 30 crews battled it out over six days. This year's trial was won by Peter Lovett and Matt Fowle in a Frazer Nash BMW 328.

With such an important anniversary coming up, the Royal Automobile Club and HERO have decided the next event will be in June 2020 - 120 years on from the running of the original 1000 Mile Trial. It will retain the spirit of the original, with some the world's best pre-war cars, a route that is both challenging and inspiring, and hospitality and celebration of the very highest order.

Patrick Burke, Managing Director of HERO said, “The Royal Automobile Club 1000 Mile Trial is a quintessentially British motoring event, whose 120th anniversary will be celebrated in 2020. For this historic occasion we have some exiting plans for the Trial commensurate with such an anniversary”.