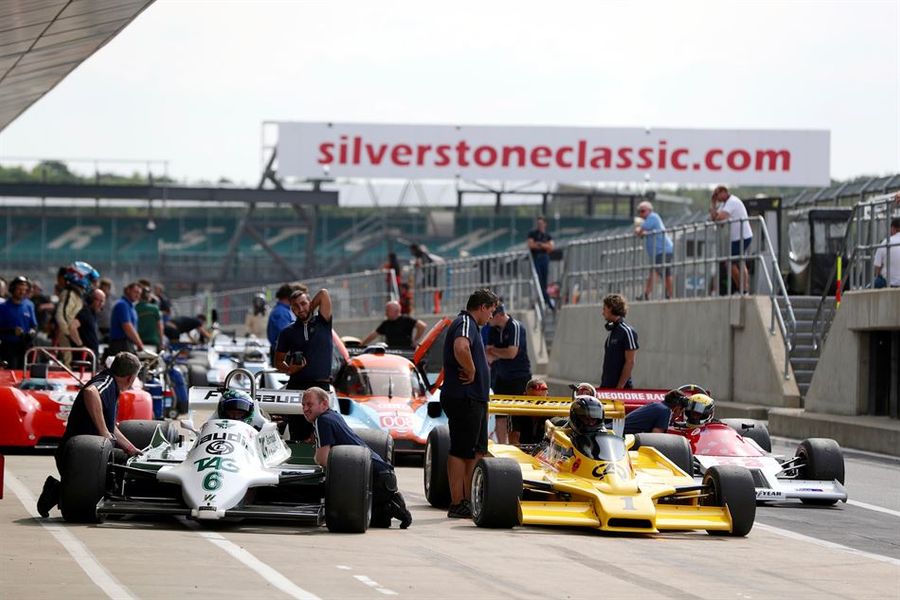 The 2018 edition of the Silverstone Classic starts today at the Northamptonshire circuit, with a large numbers of the 1000+ entries took to the iconic ‘Home of British Motor Racing’ having already tested yesterday ahead of this weekend’s spectacular.

In preparation of the weekend’s racing action, many of this year’s competitors had the final chance to put finishing touches to their machines today during testing around the famous Silverstone Grand Prix circuit.

Among them was six-time Olympic gold medallist and 11-time cycling World Champion Chris Hoy. The Scottish sporting legend got his first taste of a 2007 Courage LC75 LMP2 once seen tackling the Mulsanne Straight at 200mph in the Le Mans 24 Hours.

A seasoned racer himself having swapped his cycle helmet for a racer’s one in more recent years, Hoy – who competed in the 2016 edition of the round-the-clock French classic – will drive the open-top sportscar in the exciting new Masters Endurance Legends category and is delighted to add another credential to his illustrious sporting repertoire.

“It is just amazing to get behind the wheel of an LMP2 car again – the sensation, the grip, the downforce… it just brings it all back,” he enthused. “Silverstone is one of the best tracks to experience a machine like this and I was grinning from ear-to-ear!

“I think it is the diversity of the machinery at the Silverstone Classic that makes it just so special. You see classic Minis, touring cars, LMP cars, F1 cars… they are just truly spectacular.

"You walk around playing the fantasy game ‘if I could choose one car, what would it be?’ Every five minutes your mind changes. I think I’m going to need a bigger garage!”

With an incredible eight decades of retro machinery on show, both on and off- track, the Silverstone Classic is regarded as the zenith of historic motor racing meetings in the world, regardless of genre.

From FIA Masters Historic Formula One machinery and Masters Endurance Legends to the JET Super Touring Trophy plus much more, the Silverstone Classic features oversubscribed grids harking back to yesteryear across three days of thrilling track action. Qualifying gets underway for all classes today ahead of a packed programme of 21 races to be run across Saturday and Sunday.

With numerous highlights to keep visitors of all ages entertained, the weekend will tip a nod to where it all began with celebrations to mark the 70th anniversary of the first Royal Automobile Club International Grand Prix in 1948, held at Silverstone.

A number of the cars that competed in the inaugural race are going on a very special display for visitors to admire and will also hit the track for a parade ahead of a race featuring the machines these beautiful racing showpieces would go onto inspire, the Adrian Flux Trophy for Pre-1966 Grand Prix Cars (HGPCA).

The Silverstone Classic will also set the scene for a particularly special tribute to the British Touring Car Championship, which itself celebrates the milestone of 60 years in 2018.

In what is being hailed Tin-top Sunday, the packed itinerary includes the Transatlantic Trophy, Historic Touring Car Challenge, Gallet Trophy for under 2-Litre Touring Cars (U2TC) and the JET Super Touring Trophy, starring legends of the discipline over the decades.

In honour of the special celebrations, Rickard Rydell, is being reunited with the Volvo S40 he drove to BTCC title glory in 1998. He will also participate in a special 60-car parade at the wheel of the truly iconic Volvo 850 Estate that made headlines around the world when it debuted in 1994.

“It is a true privilege to be here and to see so many wonderful cars still racing. For me, this year’s Silverstone Classic will be extra special because it is 20 years since I won my BTCC title in the Volvo S40 – she still feels as fast as she did back then!”