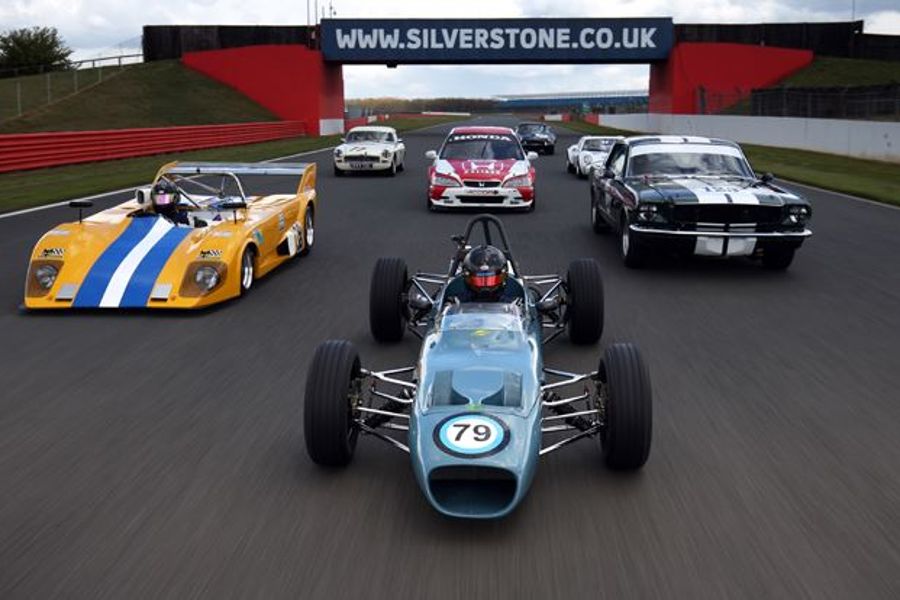 The 50th anniversary of the Historic Sports Car Club will be marked in style at this year’s Silverstone Classic (July 29th to the 31st) with a very special parade of 50-cars from the club’s extensive portfolio of race championships and series.
The HSCC was formed in 1966 and the club has planned a year of celebration events in 2016 to mark its golden jubilee. On the Sunday of the Silverstone Classic (July 31), a 50-car parade will show the breadth of the club’s race programme with at least three cars representing each of the club’s 16 championships and series.
The parade will span single-seaters from Formula 5000 cars from the Derek Bell Trophy and Historic Formula 2 to Formula Junior, Classic Racing Cars, Classic and Historic Formula Ford 2000 and Historic Formula Ford. Sports and GT cars will come from the Guards Trophy, Pre ’80 Endurance Series and Jaguar Classic Challenge. Touring Cars from the Super Touring Trophy and Historic Touring Car Championship will span four decades, and two generations of Formula 3 cars will be on show from the Historic and Classic categories. Meanwhile, entry-level historic racing will be represented by Historic and 70s Road Sports and Classic Clubmans.
The 50-car parade will include cars from five decades and cover everything from a Formula 5000 Lola to a Lotus Elan, offering event visitors the widest possible spread of historic racing cars on track together.
“It seemed appropriate to mark 50 years of the HSCC with 50 cars in a parade at the world’s biggest classic and historic racing festival,” said HSCC Chief Executive Officer Grahame White. “We are very grateful to the Silverstone Classic team for allowing us the opportunity to showcase the fabulous range of categories that the club organises.”
Formula 500 Classic and Historic Formula Ford 2000 Derek Bell Trophy Historic Sports Car Club Historic Formula 2 Silverstone Classic Historic Formula Ford Formula Junior Classic Racing Cars