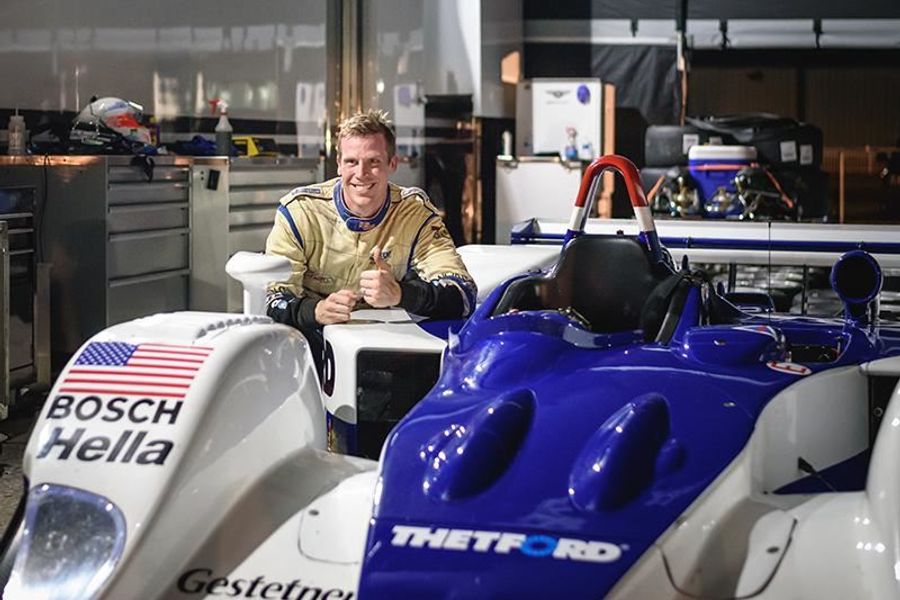 A dual celebration of Sebring International Raceway's rich auto racing history and illustrious aviation legacy will be held for the second time, November 29 - December 3, when a legendary lineup of historic race cars and iconic aircraft come together for the Historic Sportscar Racing (HSR) Classic 12 Hour at Sebring, Pistons and Props, presented by the Alan Jay Automotive Network.
Debuting last December, the Classic 12 Hour at Sebring, Pistons and Props, is an on-track and on-the-runways celebration of the 12 Hours of Sebring and historic Hendricks Field, the iconic military and civil aviation facility on which the famous sports car race has been run for 65 years.
The Classic 12 Hour at Sebring features three full-days of historic and vintage sports car racing and a full "fly-in" and display of equally awe-inspiring military and civilian aircraft from the last half century and beyond. It also features a strong HistoricRacingNews.com connection with two of our ream forming part of the circuit commentary team for the Florida event.
The 2017 edition of the Pistons and Props event will feature an expanded collection of legendary airplanes as well as some event-debuting historic prototype and vintage sports cars competing in the HSR Classic 12 Hour tribute race. The full weekend also features the Sebring Historics, the year-ending rounds of the full-season HSR WeatherTech Sprint and B.R.M. Enduro series.
Recent additions to the race car entry list include a pair of pristine prototypes from Dyson Racing. The accomplished sports car racing team has entered a bright orange 2006 No. 12 Lola/AER B06/10 in both the Classic 12 Hour and Sebring Historics and a 2002 No. 20 MG-Lola LMP675 B01/60 in the Sebring Historics sprint and enduro events.
Chris Dyson, who has the 2011 IMSA ALMS P1 Driver title among his championships, will compete in both prototypes, co-driving the bright-orange Lola with car owner Tony Burgess.
"We just finished a complete restoration of Tony's car at our shop in Poughkeepsie, New York on his behalf," Dyson said. "It has been shaken down and track-tested and Tony was eager to make the Sebring event. While the car was raced by Tony with other teams entering it in the ALMS, it is in fact the same chassis-engine package that our team raced in 2006 in ALMS. So we have a nice 'book' of setup data to apply."
Dyson, son of Dyson Racing founder Rob Dyson, was a participant in 2016's inaugural Classic 12 Hour weekend with the No. 20 MG-Lola (pictured above) but is looking forward to a little more track time this year.
"The MG-Lola is the same car that we tried to run in last year's HSR event but we had a fuel cell issue that we couldn't fix at the track and had to pack up early," Dyson said. "This car is my 2003 ALMS championship-winner and the 2005 ALMS runner-up. We've been wanting to run it in anger since reacquiring it three years ago, and the HSR sessions are ideal for that. It should be an enjoyable week back at Sebring."
Still in part an active airport, the Classic 12 Hour, Pistons and Props, will once again see vintage aircraft land on one of the Sebring runways on Friday afternoon and later taxi into the paddock to be displayed right alongside the historic race cars.
Among the confirmed airplanes is a 1942 Vultee BT-15 piloted by Tom Smith and the similar 1943 Vultee BT-13 of Bryce Bock. After graduating from Primary Training, cadets of the era moved on to phase two of their flying curriculum know as Basic Training. The Vultees are two variants of the "Basic Trainer" (BT) aircraft that played a major role in teaching the military pilots of the day the finer points of flying.
Bock's Vultee BT-13 is one of approximately 11,000 produced powered by the Pratt & Whitney 985. Due to the demand for the R-985 during the war effort, Vultee contracted with Wright Aeronautical Corp for their W-975 and redesignated the plane as the BT-15. Smith's BT-15 was delivered to Bainbridge, Georgia Army Air Field in August 1942 and is one of four still flying today out of 1,200 of the type produced.
The growing list of airplanes schedule to appear at the Classic 12 Hour, Pistons and Props, also includes a 1942 Stearman/Boeing N2-S3, 1941 Beechcraft C-45, 1955 Beechcraft T-34 Mentor, 1962 Piper U-11A, 1956 North American T-28C Trojan and 1973 Scottish Aviation LTD Bulldog.