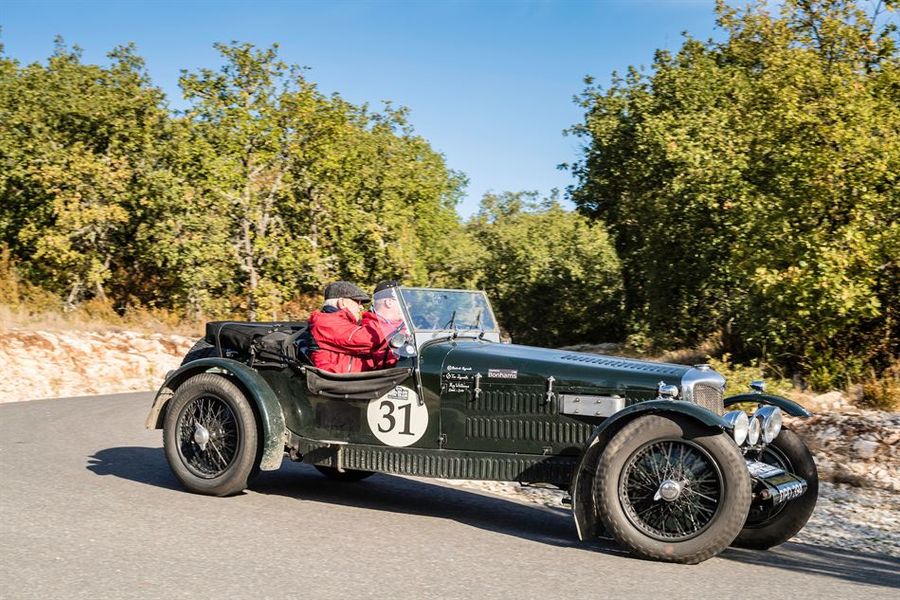 Photo: ERA/Gerard Brown
The Endurance Rally Association’s inaugural Blue Train Challenge reached a dramatic conclusion in Cannes on Friday 22nd of September as the Cadillac that had been leading right from the start of the five-day rally ‘fried a wheel bearing’ and had to retire on the final regularity. This gave the win to Richard and Tom Jeffcoate in the 1938 Riley 16/4 Special.
Inspired by the legendary run by the Bentley of Wolf Barnato from Cannes to London in March 1930, the Blue Train Challenge set off from the elegant resort of Deauville with James Gately and Tony Brooks driving into the lead in their 1937 Cadillac Convertible.
As the rally journeyed some 1690kms through Fountevraud, Vichy, Lyon, and L’Isle-sur-la-Sorgue, with crews and cars competing in a series of regularity sections, special tests, and time controls, Gately and Brooks kept the rest of the field at arms length until that final regularity just before the finish line.
This paved the way for father and son team of Richard and Tom Jeffcoate in the Riley to take the trophy. Richard was stunned, delighted but at the same time, generous in victory when he said: “I could simply not believe Jim’s bad luck this afternoon.” This is Richard’s first ERA win and only the third navigational outing for his son Tom who is ‘good with numbers’.
Second and third place were taken by a duo of Aston Martins. Nigel Dowding and Mary Antcliff claiming silver in their 1934 MkII and Christian and Matthew Brash securing third in their 1938 15/98 Sports.
The Riviera Cup, open to sports car manufactured between 1st January 1948 and 31st December 1962, was won by Xavier and Lucas De Sarrau, from Switzerland, in the gleaming white 1957 Porsche Carrera 1500GS.
Discretionary prizes awarded included the Tin Top Trophy which went to Colin and Veronica Weekly in the 1939 Dodge Business Coupe; The Concours d’Elegance award went to Bjorn and Anne Schage in the 1938 Alvis Speed 25, and the Spirit of the Rally prize went to Max and Andrea Sowerby in the 1939 Talbot Lago T120. The awards were presented by the Lady Mayor of Cannes, Claire Anne Reix. Presidente du Palais Des festival et Des congress de Cannes et Conseillère Municipale.
Joint Clerks of the Course Anthony Preston and Keith Baud said: “We are delighted with the way that event had been supported and it was a real pleasure to showcase the beautiful parts of France that we didn't know existed.”