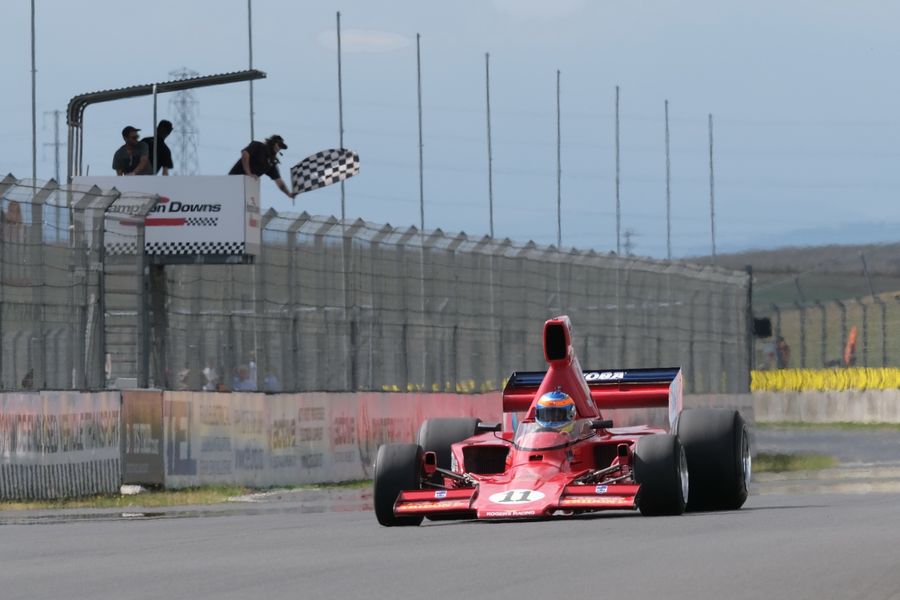 Runaway series points leader Ken Smith (Lola T332) has made a winning start at the final round of the 2018/19 SAS Autoparts/MSC NZ F5000 Tasman Cup Revival Series at Hampton Downs today, qualifying on pole in the morning and leading the first eight-lap race of the weekend from start to finish this afternoon.

The 77-year-old, contesting his 61st consecutive season of national level motor racing in this country, was particularly proud of his pole time – at 1:00.487 only a second off the class (and outright track) lap record he set earlier this year, but lamented the fact that arch-rival Michael Collins (McRae GM1) could not make it to the meeting.

“I have enjoyed today, it’s been good,” he said, “but it’s always better when you have someone to push you along.”

Behind Smith, and also enjoying a quick and trouble-free run, was David Banks (Lola T332) who set a personal best lap time of 1:01.911 in qualifying and crossed the finish line just 2.260 seconds behind Smith in the race.

“That’s the quickest I’ve ever been round here,’ the man behind series co-sponsor SAS Autoparts said as he held the qualifying sheet. “I’ve done plenty of 1:02s but never a 1:01 and I did two in a row, so yeah I’m stoked.”

That included a late-race, last lap burst after the Safety Car had been deployed when Peter Burson’s BRM P207 F1 car – running as a guest entry with the SAS Autoparts MSC F5000 cars – slowed and stopped out on the track.

Burson Snr (who usually races a McRae GM1 similar to the one his son Aaron drives in the SAS Autoparts MSC series) was looking forward to his first full race-length run in the unique ex-Larry Perkins car after an extensive rebuild, and though he was able to get back to his pit under its own steam it was a frustrating end to a promising debut run in the car.

“It just stopped,” he said,” just stopped. And I couldn’t get it started again under its own steam.”

In theory the Safety Car should have negated any advantage Smith had. But the canny veteran read the track going green again like the pro that he is, getting the jump again over the close running David Banks, Glenn Richards and Brett Willis, who in turn edged ahead of Aaron Burson and Kevin Ingram with Ingram getting a better run off the final turn and beating Burson to the flag by  a margin of just 0.024 of a second!

Three seconds separated the three McLarens in qualifying but in the race all three lapped in the 1:07 bracket.

There are two more eight-lap SAS Autoparts MSC NZ F5000 Tasman Cup Revival Series races at the season-ending Legends of Speed meeting at Hampton Downs tomorrow, one in the morning, and the season-finale – for the Alain Prost Trophy – in the afternoon.