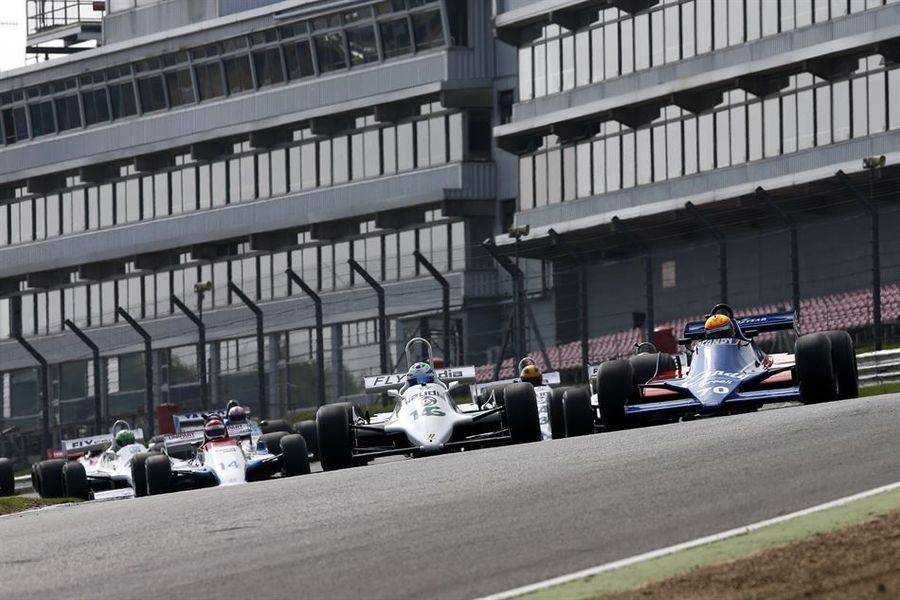 Nick Padmore was the man to beat at Brands Hatch at the weekend as he took two wins in his first outing in a Williams FW07C in the FIA Masters Formula One Championship . Starting from pole in the opener, Padmore gifted an advantage after Michael Lyons had to abandon the family’s stricken McLaren M26 in favour of father Frank’s Hesketh, starting 21st. Loic Deman (Tyrrell 010) seized the advantage at the first corner, going round the outside of Padmore while Lyons scythed through the field, ending the opening tour 11th.However, Deman was judged to have been out of position at the start, and was soon forced to serve a penalty, as Lyons battled up to seventh, passing Greg Thornton’s Lotus 91 in the process. Steve Hartley’s Arrows A4 was in a fierce tussle with Simon Fish’s Ensign N180, and there was no separating Christophe D’Ansembourg (Williams FW07), Rob Hall (Ligier JS17), Mike Wrigley (Williams FW07), Lyons and Greg Thornton (Lotus 91/5) but their battle was interrupted when Ian Simmonds beached his Tyrrell 012 at Westfield and the safety car came out.With Deman forced to take his drive-through penalty, Padmore assumed the lead and set about building his advantage as behind him, D’Ansembourg succumbed to Wrigley and Lyons on lap 11 and Fish dropped to 7th on lap 13.This put Wrigley and Lyons fourth and fifth, and Lyons made his move to pass the Williams. Steve Hartley (Arrows) had a cushion of just 1.5 seconds to Lyons until he dropped out on the penultimate lap, leaving Padmore to take a comfortable victory from Lyons in second after a charging drive, then Mike Wrigley’s Williams in third by three seconds. Lyons took victory in the Fittipaldi class from Max Smith-Hilliard’s Shadow and James Hagan’s Hesketh, while in the Head class, Padmore took victory with Wrigley and Thornton second and third.Padmore seized the advantage at the start of race two, but the weekend of woe for Lyons continued as he pulled off with input shaft failure on the first lap. Padmore set the tone for the race with a stunning fastest lap of 1.20.282 on his first flying lap – faster than his pole position lap – to lead from a fired-up Deman and D’Ansembourg.By lap seven, Padmore was managing the gap to Deman and Thornton’s Lotus passed D’Ansembourg at Paddock Hill. Ian Simmonds was making amends for his spin the previous day, relieving Philip Hall (Theodore TR1) of eighth place. By lap 12, the order was Padmore, Deman, Hartley, Wrigley, Thornton and it would remain so until the flag, in spite of Greg Thornton’s best efforts in the closing laps. Andrew Beaumont (Lotus 76/1) slowed and pulled off at Graham Hill bend on the penultimate lap, but Nick Padmore completed the double with an advantage of 6.7 seconds – not bad for the first weekend racing the car!“That was an amazing weekend,” said Padmore. To drive a car like this is a real privilege and I have great respect for the heroes that drove them in period.”The Fittipaldi class was won by Philip Hall’s Theodore and the Lauda class won by Ian Simmonds (Tyrrell 012).