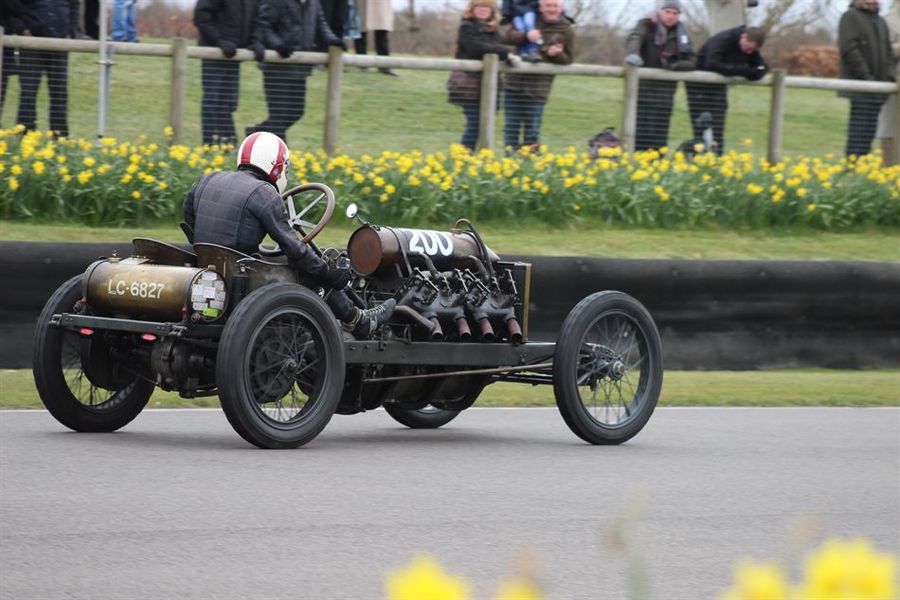 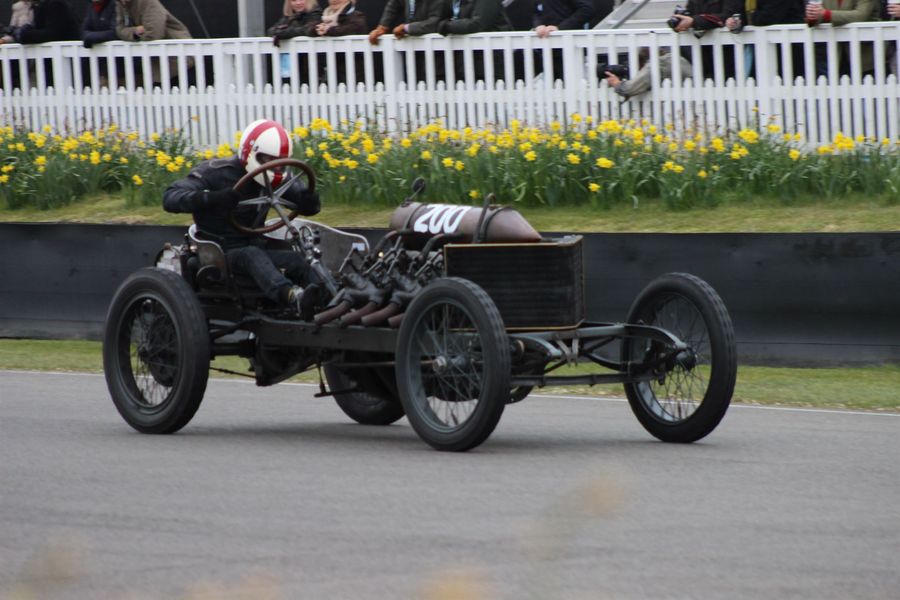 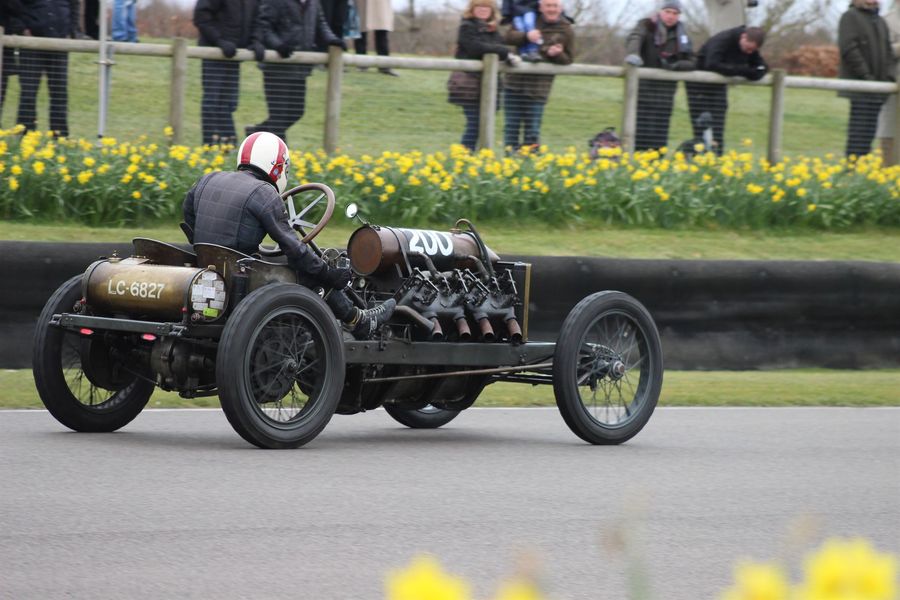 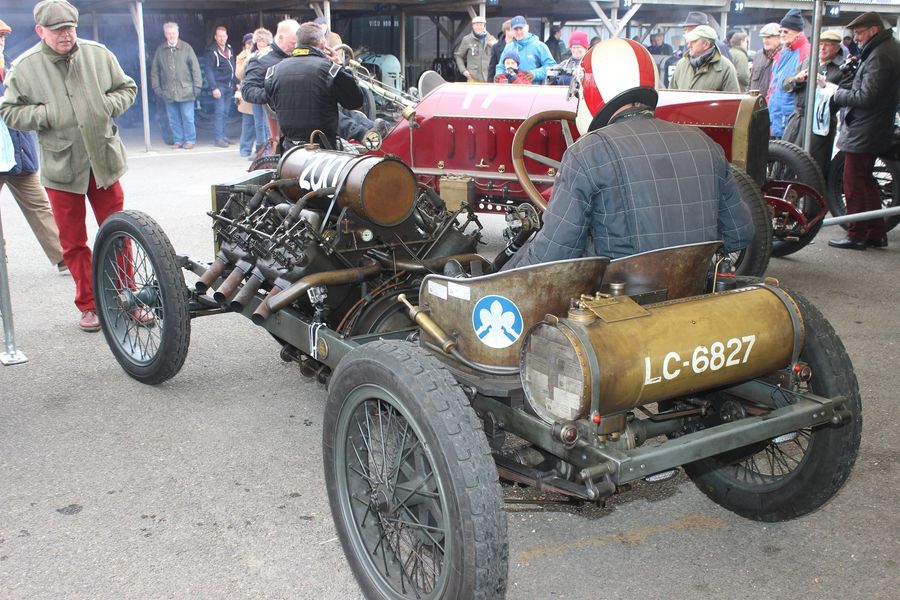 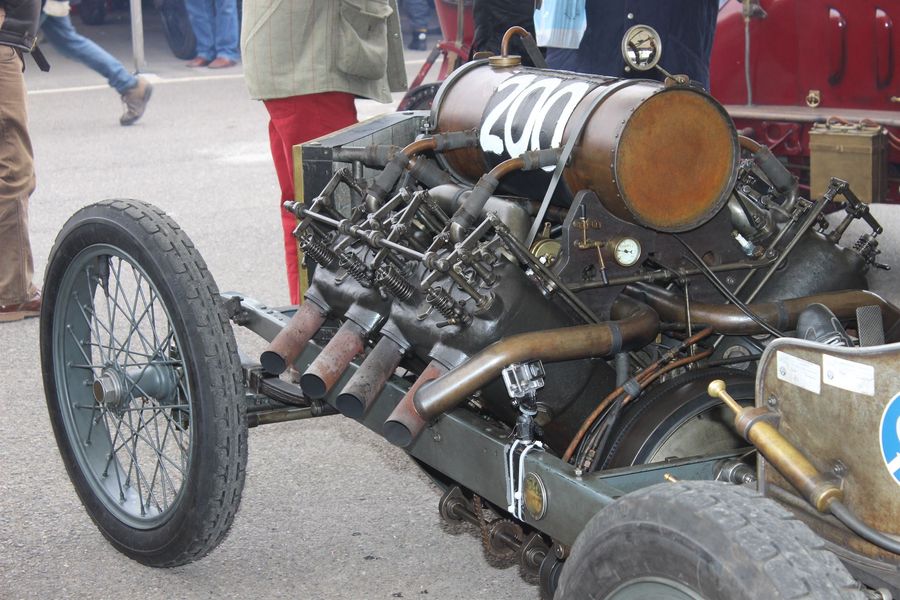 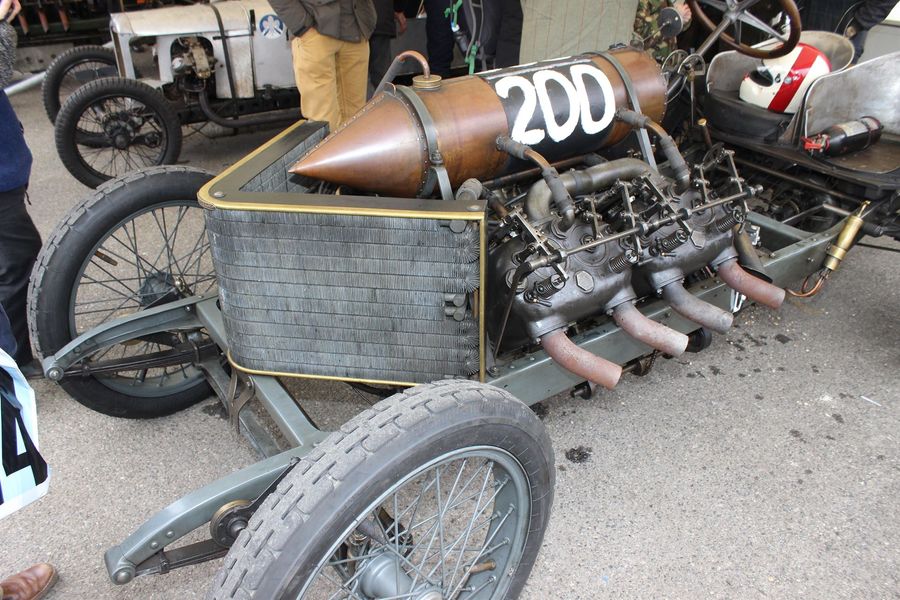 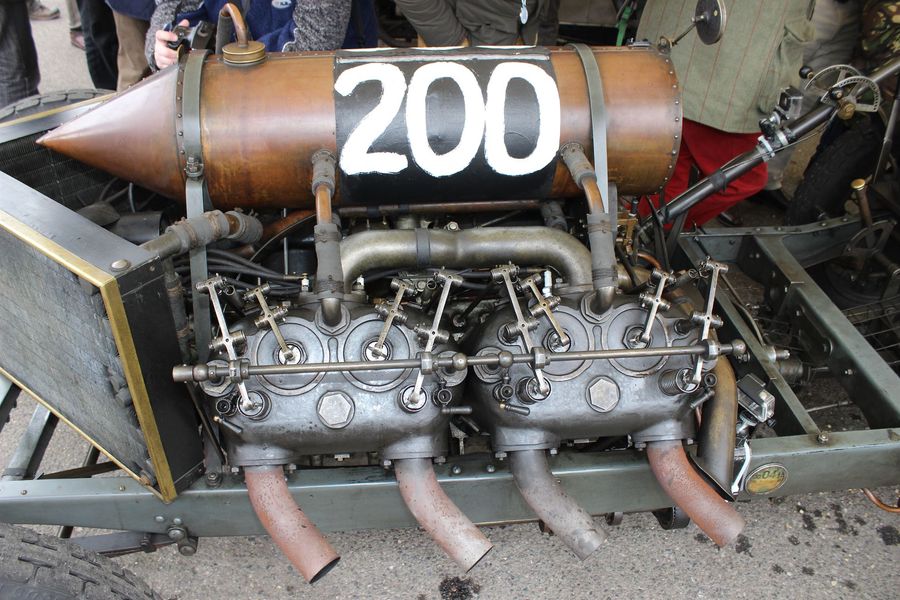 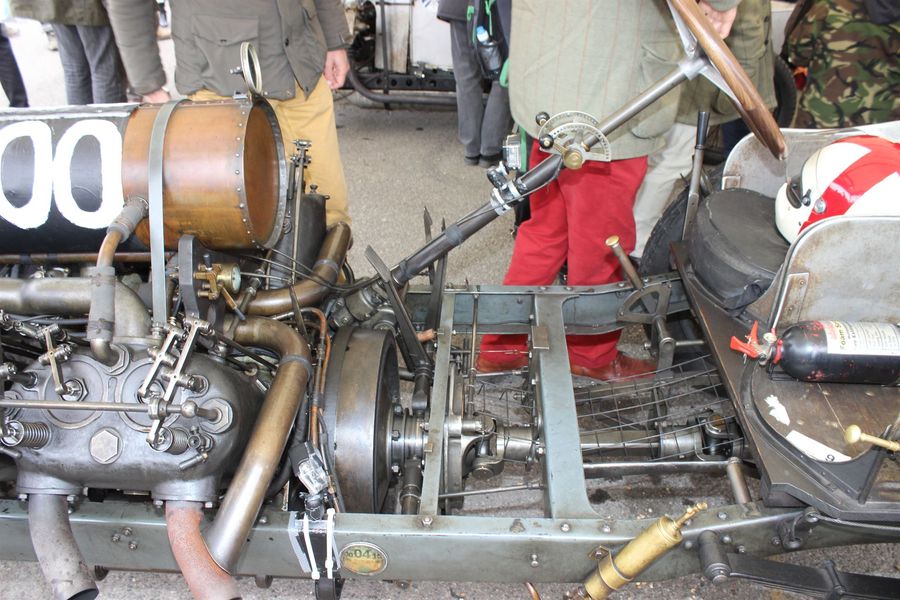 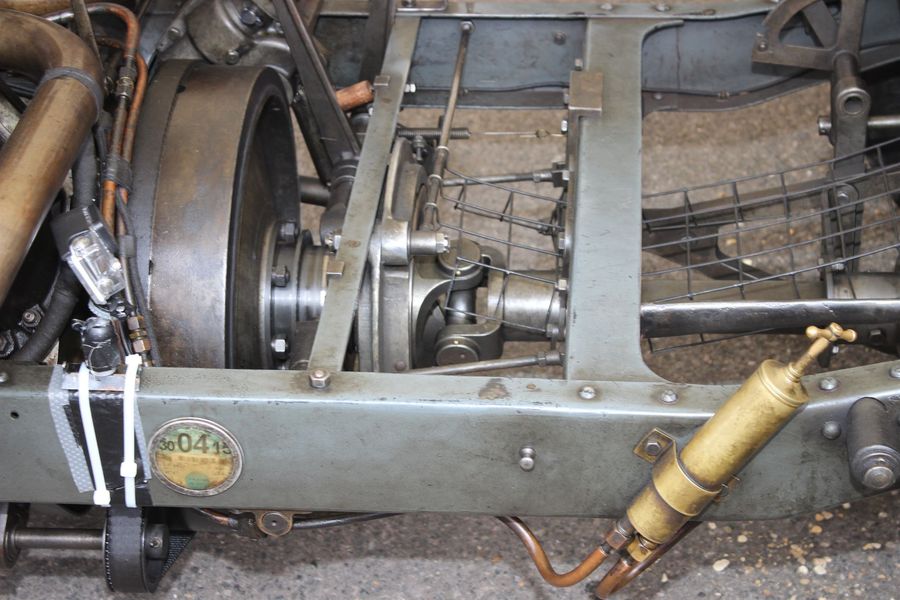 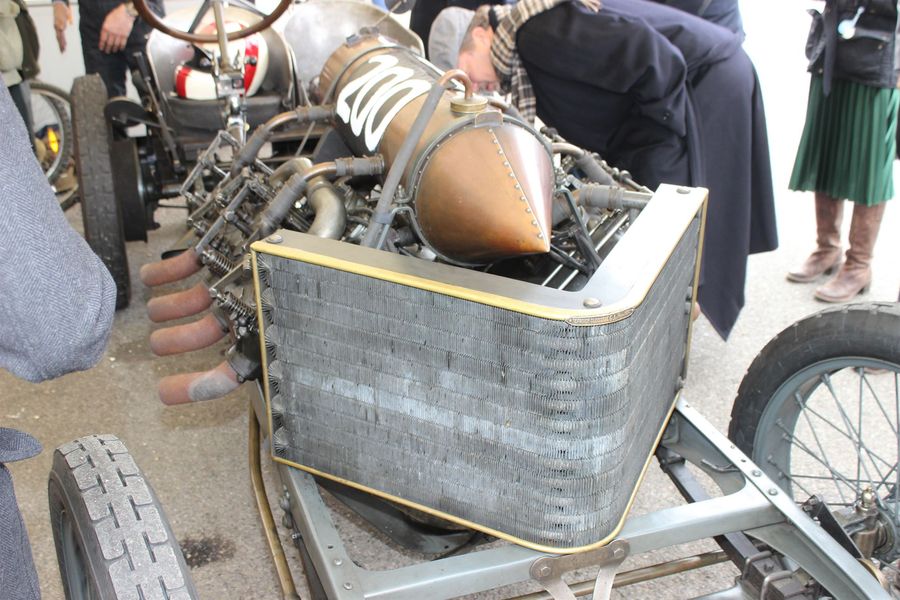 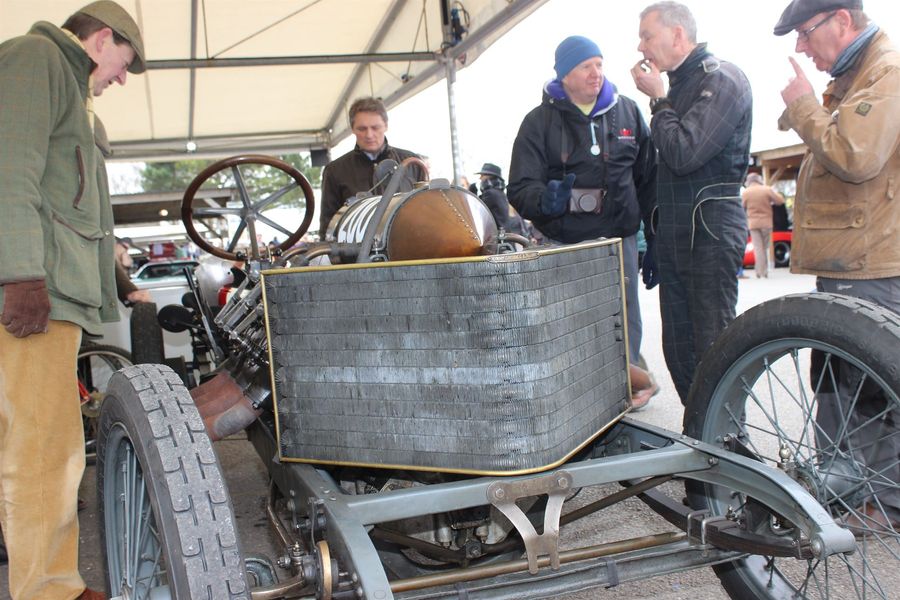 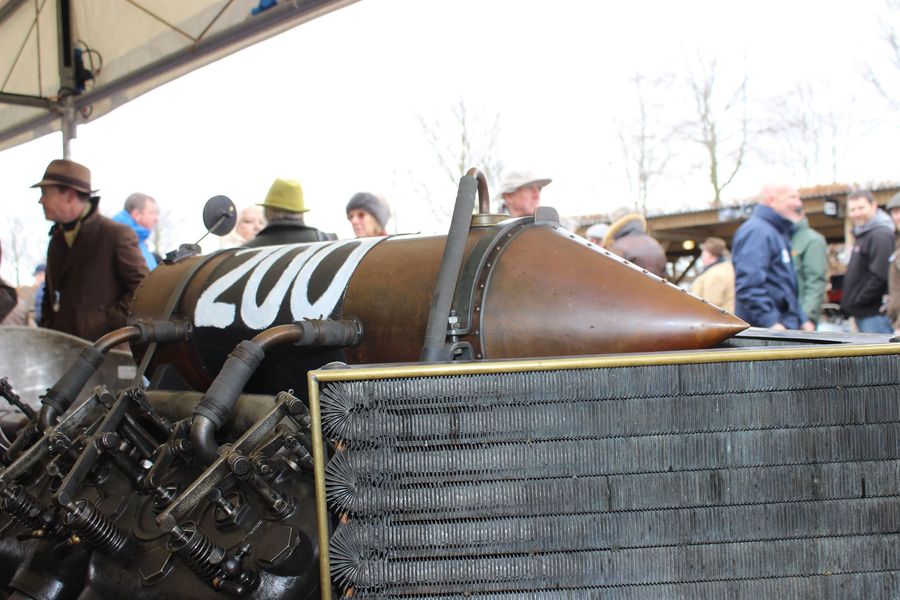 Click on the Gallery tab of pictures of the Darracq V8 and the Video tab to see the car roar its way of the hill at the 2015 Festival of Speed!
The amazing pre-war runners – and in some cases that meant pre-World War One – of the SF Edge Trophy at Goodwood’s recent Member’s Meeting proved a real crowd pleaser, with one of the brightest stars Mark Walker’s mighty 200bhp Darracq. The 1905 22.5-litre machine was built to set a new Land Speed Record mark, which it duly achieved, but over a century on Mark is using it on modern race circuits, and we caught up with him to talk about his potent vintage racer.
“It’s a relatively small car with lots of power and the steering isn’t that heavy so it is lovely to drive,” explained Mark We have lots of torque and not much grip, but the car handles well and doesn’t do anything you wouldn’t expect and will drift easily. The brakes aren’t very good and are only on the rear-wheels but the car doesn’t have any major vices. The only difficulty really is that it just has two gears with quite a big gap between them – at Goodwood I wasn’t sure if I would have to change down for the chicane but in fact I found I could just use top gear for the entire lap.
“The car was never designed for circuit racing, it was a Land Speed Record car, but by pure chance it works out that it goes really well on a track, almost as if someone had thought I might want to be doing that 110-years after the car was built. There is nothing I would change on it, it’s really good exactly as it is.
“I love driving it – I’m sure some people will disagree but I think this is the greatest car in the world. We will have it out this year at Prescott, Mallory Park and Curborough, all the usual VSCC meetings, and maybe a trip abroad somewhere!”
Having qualified fourth at Goodwood, Mark brought the car home in that position, with only cars at least ten years ‘younger’ ahead, and at an average speed of 73.27mph for the eight laps.
Alexandre Darracq had already had one of his cars hold the Land Speed Record when in 1905 he decided to build a new car aimed purely at the record. He used two of his company’s four-cylinder engine blocks and mounted them at 90-degrees on a new crank-case to give a V8 producing 200bhp from its 22.5-litres.  An advanced engine for its day, it was mounted a chassis of eight foot six-inch wheelbase with a two-speed gearbox. Features included the V-shaped radiator shaped round the front of the engine, a fuel tank mounted above the power unit…and a distinct lack of bodywork.
The car left the Darracq factory in Paris just after Christmas 1905 and was taken south to a long straight stretch of road between Arles and Salon, north of Marseille in the Carmargue. After some practice runs Victor Hemery powered the car down the straight road on December 30th to set a new mark of 109.65mph – which was to stand for a whole 24-days before Fred Marriott used his steam-powered Stanley to set a new record of 121.57mph at Daytona.
SF Edge Trophy Video Darracq V8 Goodwood’s Member’s Meeting Festival of Speed Gallery