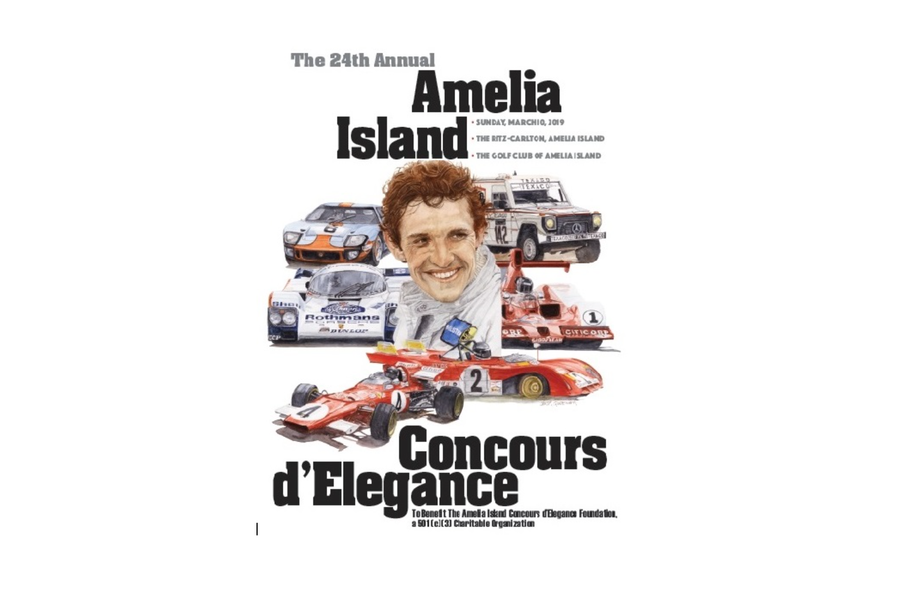 Jacky Ickx is the acclaimed Honouree of this year’s Amelia Island Concours d’Elegance, the  event featuring cars linked to the famous Belgian on display and on the official poster. Highlight of the Amelia Island experience is the judging of the prestigious Concours d’Elegance on the final day, and HistoricRacingNews.com with our presenting sponsor Reliable Carriers will bringing you into the heart of the drama with our exclusive live stream which starts at noon on March 10th (United States Eastern Time).

The 24th Amelia Island Concours d’Elegance poster, painted by renowned automotive artist Chuck Queener, features a portrait of Jacky Ickx captured during the prime of his racing career. The surrounding vehicles represent key victories for the champion. Starting at one o’clock and moving clockwise, the artwork features the 1983 Mercedes 280 GE that was built to run the Paris–Dakar Rally. Along with co-driver Claude Brasseur, the Mercedes ran the brutal 6,200 mile off-road race between Paris, France and Dakar, Senegal on Africa’s westernmost tip.

In 1979 Ickx would win the Canadian-American Challenge Cup (Can-Am) series championship behind the wheel of the Haas Racing Lola T333CS-Chevrolet. Ickx would join Mario Andretti to win at Sebring in 1972 in the Ferrari 312 PB.

This year's artwork features Ickx surrounded by six of the vehicles he drove to victory.
Jacky Ickx knew how to drive a race car in the rain. His wet weather prowess led to victory at the 1971 Dutch Grand Prix in a perfectly-prepared Ferrari 312 B2. In 1982, as a result of new FIA Group C rules, Porsche would introduce the ground effects 956. The new Rothman’s Porsche would dominate at Le Mans in 1982. Ickx and co-driver Derek Bell would take first followed by Jochen Mass and Vern Shuppan in second and Hurley Haywood, Al Holbert and Jϋrgen Barth in third.

Finally, the pictured 1968 Ford GT40 is chassis number 1075, is arguably one of the most celebrated race cars of all time. The Gulf GT40 is a two-time Le Mans winner, driven to victory in 1968 by Pedro Rodriguez and Belgian Lucien Bianchi and again in 1969 with our 2019 honoree Jacky Ickx and Jackie Oliver sharing driving duties.

Chuck Queener’s relationship with The Amelia Island Concours d'Elegance dates back to the very beginning, designing the event’s first program in 1996 and every program since. His 2019 artwork represents Queener’s seventh poster for the event.

“Chuck’s creative and technical excellence are evident in everything he does,” said Bill Warner, Founder and Chairman of The Amelia. “From our days working together at Road & Track in the 1970’s to the creation of Amelia’s latest poster, Chuck’s attention to detail and inventive storytelling through art is second to none.”