Ferrari Paintings to go on Display in London 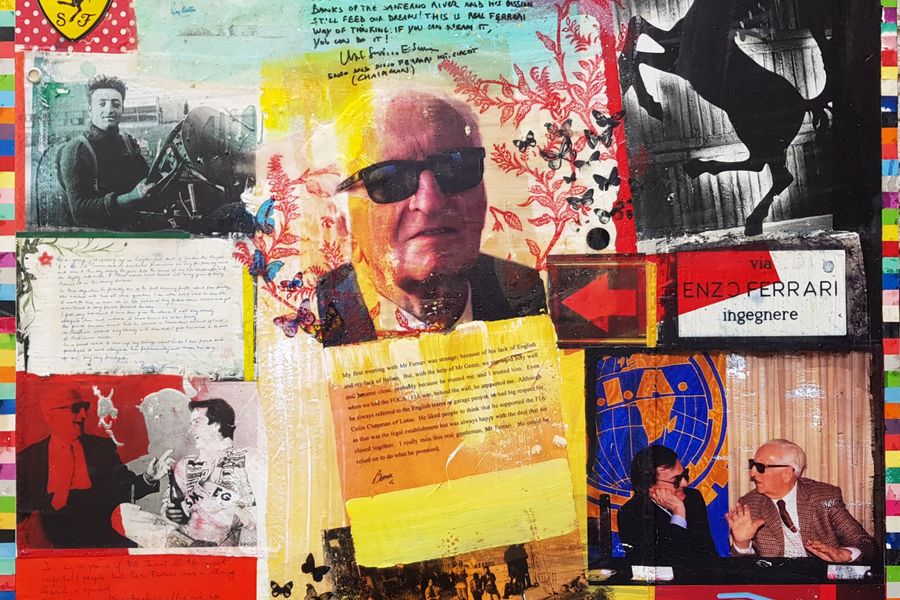 A special exhibition comprising of the 25 exclusive paintings celebrating seventy years of Ferrari will be launched at the Royal Automobile Club Pall Mall clubhouse on Tuesday 5th February 2019.

‘Ferrari in Art – The Sporting Legacy’ celebrates everything Ferrari. The cars, the drivers, the history and most importantly of all, the passion. Ferrari has an unrivalled, unbridled position in the automotive world and sits in a unique place embodying the very essence of beauty, design, speed, style, class and winning. The newly commissioned series of artworks by Mark Dickens in collaboration with Keith Sutton encompasses all these lauded features.

Keith Sutton relentlessly tracked down all the influential individuals associated with Ferrari to get involved. For each painting, drivers, owners, fans and motorsport personalities associated with Ferrari were asked to express in their own handwritten words what the name ‘Ferrari’ means to them. Over 125 handwritten (and never been seen before) quotes were obtained directly from the individuals and transferred on to the 25 pieces of artwork which artist Mark Dickens worked tirelessly on to create. The outcome provides a unique, contemporary and historical piece of Ferrari history and art.

Renowned British Formula One artist Mark Dickens found acclaim in the United Arab Emirates and Europe. His work can be found in the Royal collections of H.H Sheikh Hamdan Bin Zayed Al Nahyan to numerous Grand Prix circuits and collections around the world. He was commissioned by Bernie Ecclestone in 2011 to be the official Formula One artist creating a painting for every Grand Prix. His artwork involves collaborations with people and places which take the visual format of mixed media, building layer of photographic transfers, paper, gold leaf, fabric, paint and handwritten texts set in resin. The various textures of the composition are tactile.

Mark Dickens said “In 2014, Keith Sutton and I collaborated to create ‘World Champions in Art’ which comprised of 32 paintings, one for each Formula 1 World Champion. The entire collection was purchased by four-time World Champion Sebastian Vettel. Keith and I are both looking forward to unveiling our latest project”.

Speaking of the project Keith Sutton said “It has taken over 9 months to obtain the handwritten quotes from the various personalities associated with Ferrari; however everyone that I approached was genuinely enthusiastic and delighted to take part in this unique project. Each piece of artwork provides a fascinating and personal insight into Ferrari. It’s been a labour of love for us both. The design concept is so unique, that I doubt it will ever be repeated”.

Mark and Keith will also be donating a limited edition ‘Ferrari in ART’ box set of 25 prints to Sir Jackie Stewart OBE to help raise funds for his personal charity RACE against DEMENTIA”.