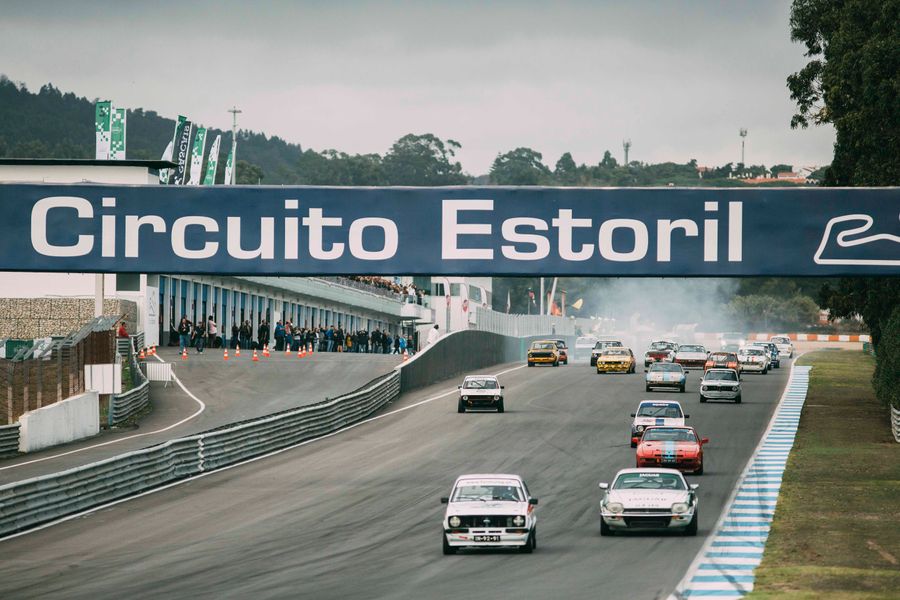 Estoril Classics 2019, on the weekend of the 12th/13th of October, proved itself again a great success. A wide variety of historic categories were in action at the Portuguese circuit, with Formula One, sportscars, motorcycles, touring cars and GTs on the bust schedule. These were joined by the  ‘Rally of Portugal Historique’, which ended with a slalom in front of the main grandstand. The event also included a Concour d’Élegance in the Casino Estoril gardens.

The success of the event was underlined by a large crowd at the Autodromo do Estoril and by races and racing machines that will certainly leave fond memories for the fans who gathered at the oldest Portuguese permanent racing circuit.

The day started with the car clubs exhibition in the circuit, followed by the Spirit of Speed – FIM 70th Anniversary, with a group of over 40 historic Grand Prix motorcycles on track, featuring Giacomo Agostini and his MV Agusta.

The competition element started with the Mini Trophy, celebrating the Mini’s 60th anniversary, which featured seventeen cars. In the first race, after a close race, the winner was Philippe Quirière, who was joined at the podium by Fernando Soares and Jorge Correa. Claudio Mota was the winner by less than tenth of a second in the Mighty Mini Trophy for Group 1 Minis.
The second race was held at the end of the afternoon and the recipe was the same, Quirière winning again, followed by Soares and António Silva. In the fierce fight between the Minis from the Mighty Mini Trophy, Paulo Leitão won by less than tenth of a second.

If the Mini impishness impressed the crowd, the following category, the Classic F1 Pre-1986 was all about the senses – the striking engine noise, the colours, the speed, left everybody impressed. In the first race, Martin Stretton’s Tyrrell 012 was be the best, followed by the classic Lotus 91-07 from Katsuaki Kubota and by Jamie Constable’s Shadow DN8, after a good fight between the Japanese and the English drivers.

The second race took place in the afternoon, and the Autodromo do Estoril’s stands were full to feel again the F1 engines’ power. Stretton won again, with his Tyrrell, followed by Frank Lyons’ McLaren M26, who had retired in the morning. Jamie Constable repeated the morning’s third place with his Shadow, as Katsuaki Kubota was forced to retire with gearbox problems in his Lotus.

In the Iberian Historic Endurance, the 50s’ single seaters were replaced by the prototypes, GT and touring cars. The podium had a representative from each category, with Carlos Barbot, in Merlyn Mk4, in the top step, Miguel Ferreira / Francisco Carvalho, in Ford Escort RS 1600, in second, and James Guess / James Hilliard, in Ginetta G10, in third.

After the car clubs’ exhibition and the 60th Mini anniversary, with more than 200 cars in the track, the rally cars were back in the Autodromo do Estoril main straight for another slalom. Ari Vatanen and Mikko Hirvonen impressed with their driving skills at the wheel of the cars they had driven in the past – Opel Manta 400 and Ford Focus WRC, respectively.

The afternoon opened with a visit to the Formula 1 past, with the HGPCA F1 – Pre 1966, with Brabham, Lotus, Cooper seizing centre stage. Jon Fairley in a Brabham BT11 won, beating Andrew Beaumont after a close fight. Sid Hoole, in a Cooper T66 F1, completed the podium.

From the top car racing category, the event moved on to to the racing machines that recall the best times of Le Mans 24 Hours. Max Hilliard and Nick Padmore, in Chevron B19, won, beating John Spiers Osella’s PA3 and the Lola T292 driven by Carlos Tavares.

The competitive weekend ended with the touring cars, the Group 1 Portugal. João Diogo Lopes was the best, in a Ford Escort RS 2000, followed by André Castro Pinheiro’s Jaguar XJ8 V12 and the Ford Escort RS 2000 from Paulo Vieira.