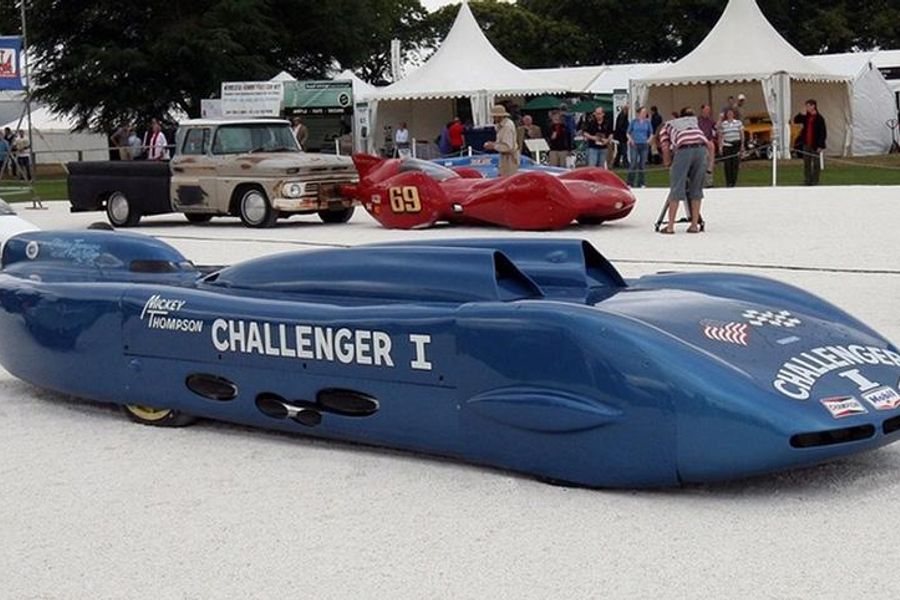 A pair of all-American land speed race cars representing the past and present glory of man's never-ending pursuit of speed are headed to the Motorsports Hall of Fame of America (MSHFA) at Daytona International Speedway.

Danny Thompson, son of the late Mickey Thompson (MSHFA Class of 1990), is delivering this week to the MSHFA both his father's 1960's era Challenger I as well as his own world-record-setting Challenger II. Both land speed cars will be on loan to the MSHFA and on display for a limited time starting this Monday.

To celebrate the arrival, Thompson will be the featured guest in an open-to-the-public presentation at the MSHFA focused on his family's lifelong fascination with speed and the story behind Challenger II's incredible world-record run into the history books at 448.757 mph last year on the legendary Bonneville Salt Flats (pictured at top).

Scheduled to be held in the Hall's Petersen Theater, the presentation takes place this Monday, May 13 at 7 p.m. EDT. Admission is $10 in advance or at the doors of the MSHFA, a non-profit 501(c)(3) through the Motorsports Museum Foundation, that has been in operation since 1989.

Setting 295 records at Bonneville alone, Mickey Thompson held more speed and endurance records than any other man in the world. A diverse and multi-talented motorsports personality, as a driver Thompson won races and championships in everything from midgets to sports cars. He was also a mechanical innovator, designer and master promoter who founded SCORE International and stadium off-road racing through the Mickey Thompson Entertainment Group.

It was Thompson's dream of becoming the fastest man alive, however, that drove him to design and build Challenger I in the garage of his California home. Its four supercharged Pontiac engines produced a combined 2,000 HP that was enough, in September of 1960 at Bonneville, for Thompson to go faster than anyone had before: 406.60 mph. The incredible triumph wasn't an official record, though, because an engine problem prevented completion of a required return run.

Thompson returned to Bonneville with the Autolite Special in 1968 for another shot at the piston-powered land speed record only to see his plans washed out by flooding on the salt flats. The car then sat for more than 30 years until son Danny restored it and made attempts of his own.

Renamed Challenger II, the car is remarkably the same as it was when Mickey Thompson designed and drove it. The original Ford 427s were swapped for two 2,500 HP aluminum Hemi engines, but underneath it was the same chassis with the same aerodynamic body work tying it all together. During Bonneville Speed Week 2018, Danny made both his and his father's dreams come true, setting a new world record of 448.757 mph in Challenger II.

Danny Thompson today owns both Challengers that are presently being driven from the west coast to Daytona Beach and the MSHFA.

Tickets for the Monday, May 13 presentation are $10 and available in advance and at the door.