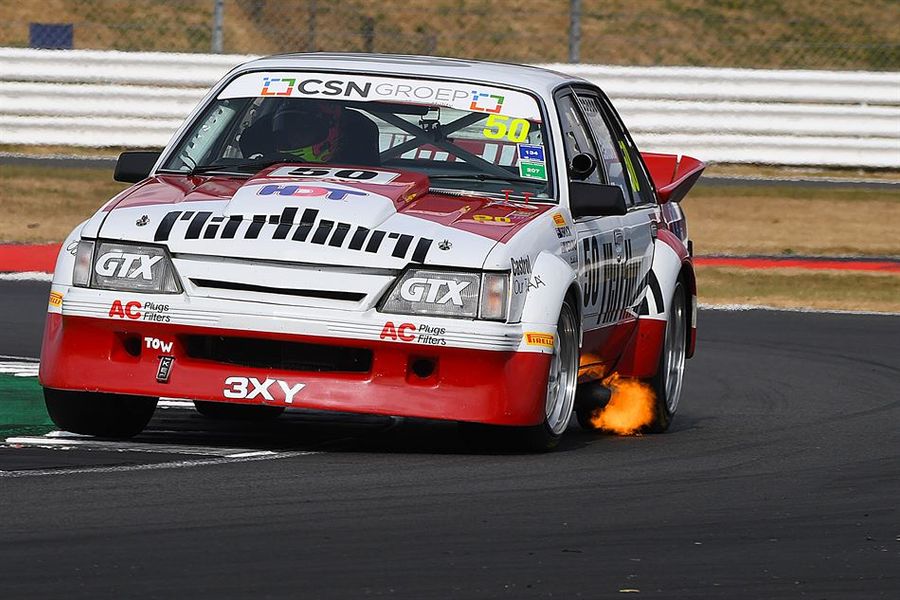 Nestled in third place on the timesheets after qualifying for the JET Super Touring Trophy at the Silverstone Classic was the Holden Commodore of Abigail Eaton, the five-litre V8 car surrounded by sophisticated Super Touring ex-BTCC saloons. Before the two Super Touring races we spoke to Abigail in the pit garage about the challenge of racing the mighty Commodore against the nimble opposition.

“It has a big V8 so the long straight and lowing corners here help us,” said Abigail, “but on this layout getting a tonne and half car stopped for corners like Vale is not easy. There might be a little bit more time to come from both the car and myself in the race, the tyres got pretty hot in qualifying yesterday, it is a long lap and you just have to keep pounding round.

“I had a bit of a battle yesterday with Rickard Rydell and John Cleland at the start of qualifying – we were side-by-side trading paint! We just have to see what we can do in the race and aim to get on the podium.

“They have the two-litre engines while I have the big V8 with all the torque, but the Holden doesn’t like stopping and going round the corners. The other cars can brake so much later, I am anchoring up way earlier to get the car to slow, braking while they are still flat-chat, so not going to find the two seconds to the two guys in front but the times just behind me are pretty close and it should be a good race.

“We have had the car for a couple of years, my dad imported it from Australia. It was pretty rough when we got it, he has stripped it all down and built it up to the car we have here today. It looks great now, he has put a lot of time and effort into it, and I have to look after it.

“We shook the car down at Spa and Croft last year, then have done a lot of work on it this year. Each time we go out in it we learn something and change things, and it’s a fun car to drive, and you just start it up and everyone looks at you - it sounds great and it’s nice to have something different out there.”