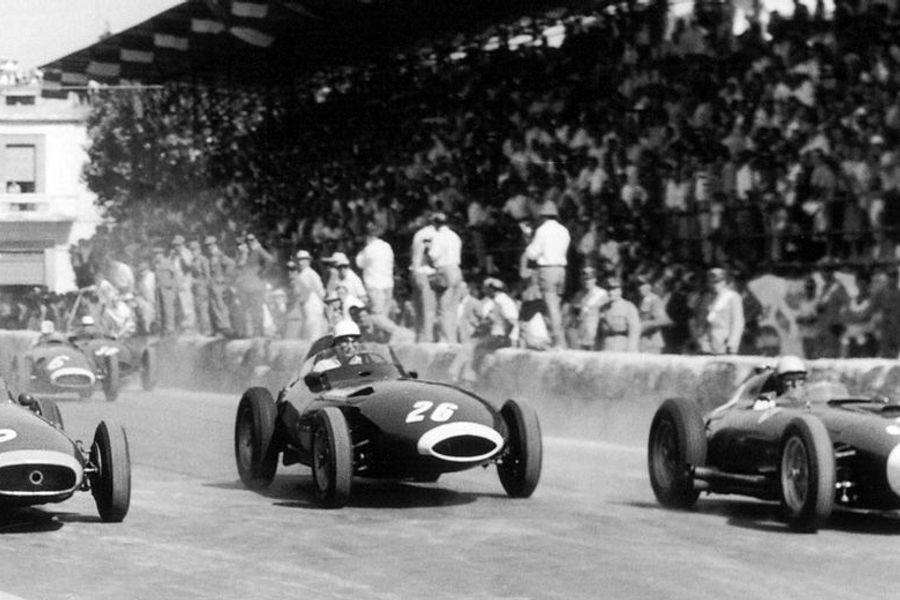 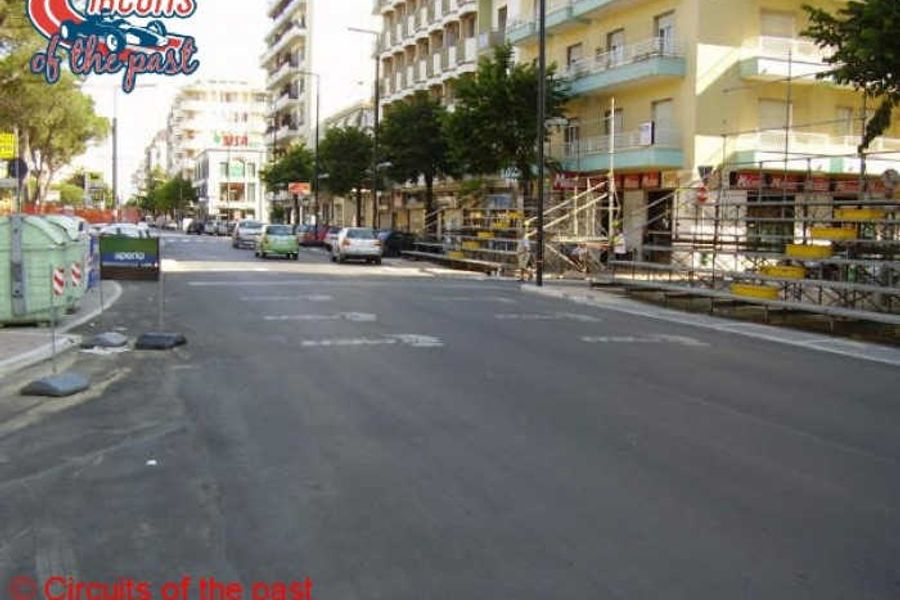 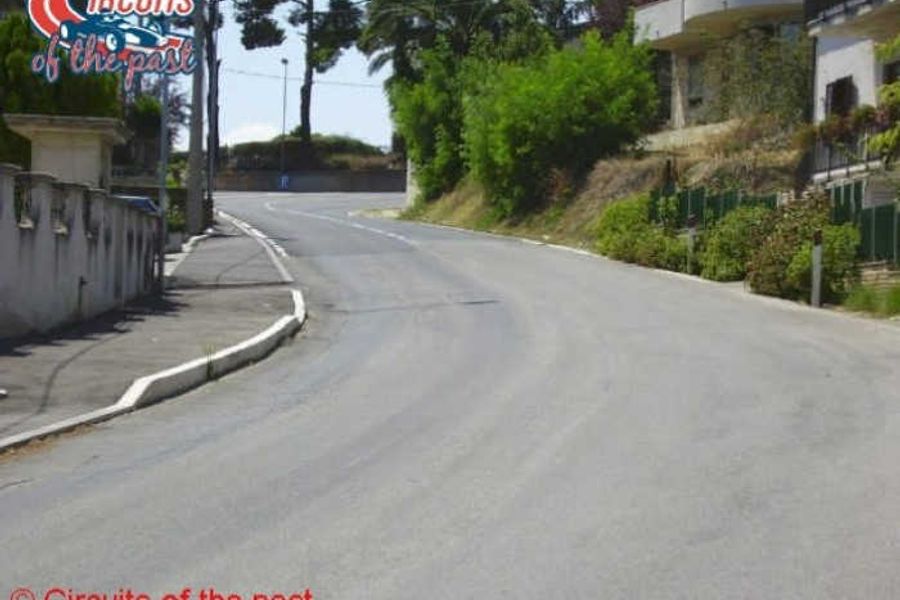 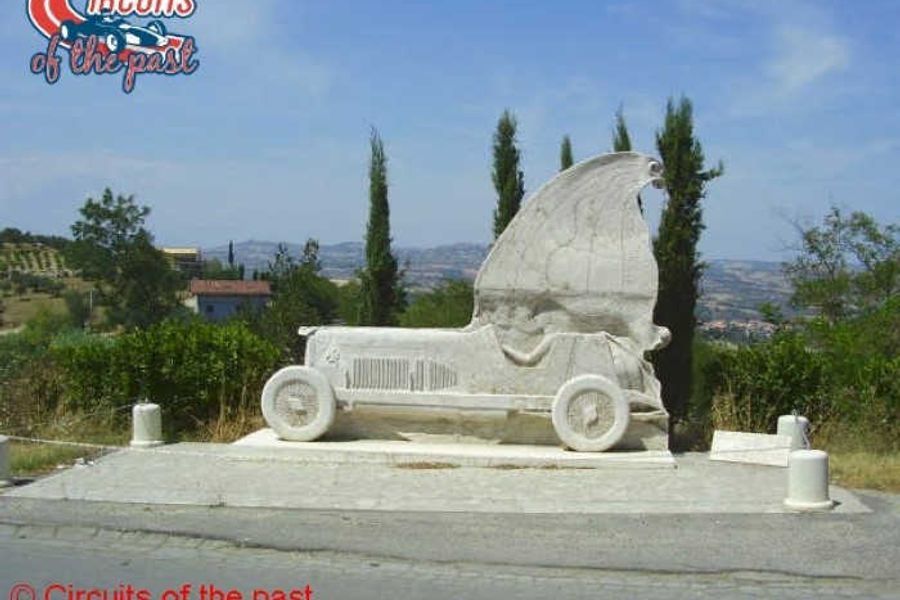 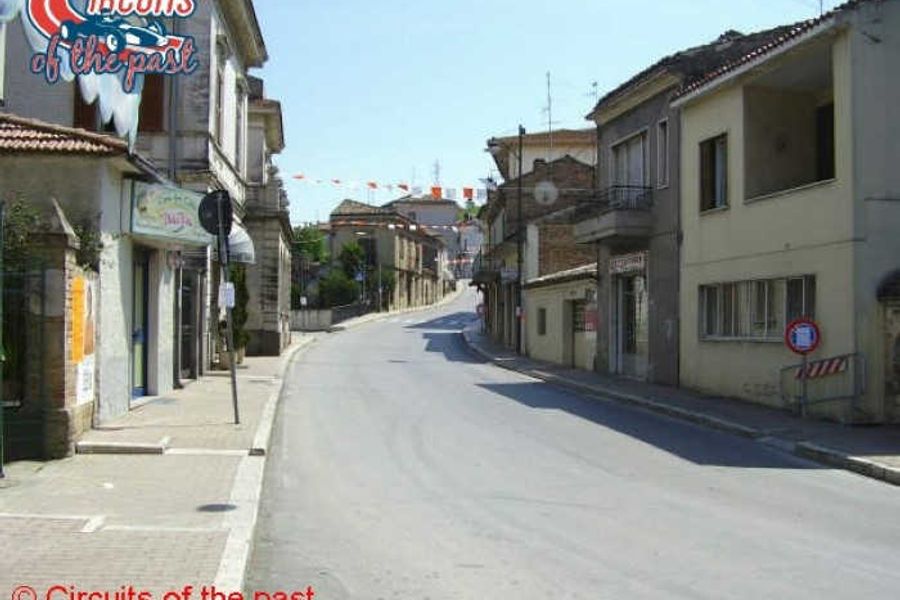 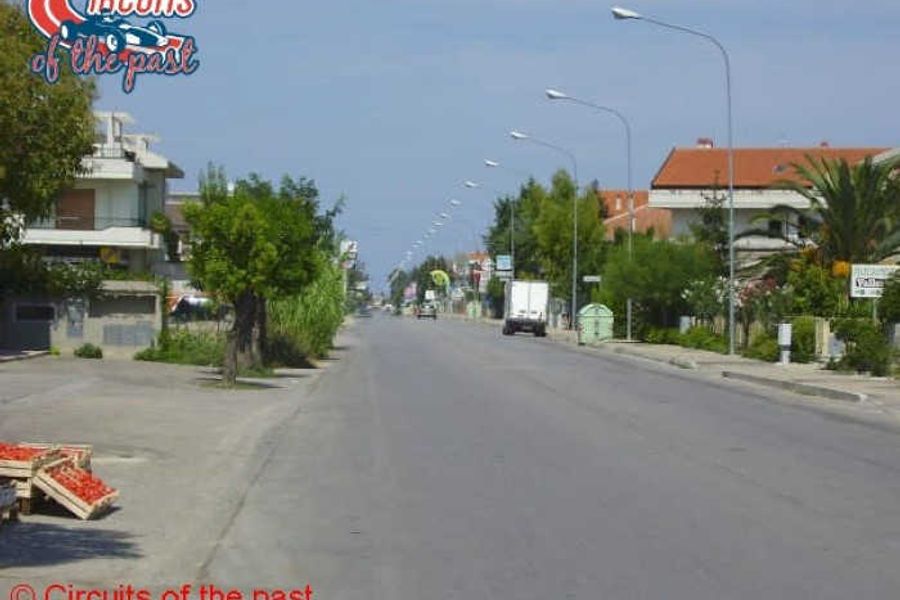 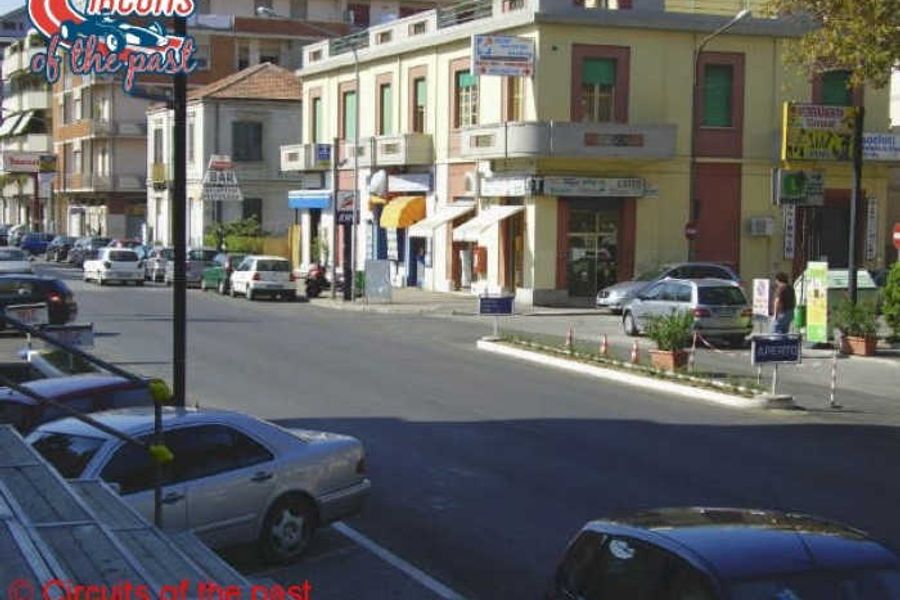 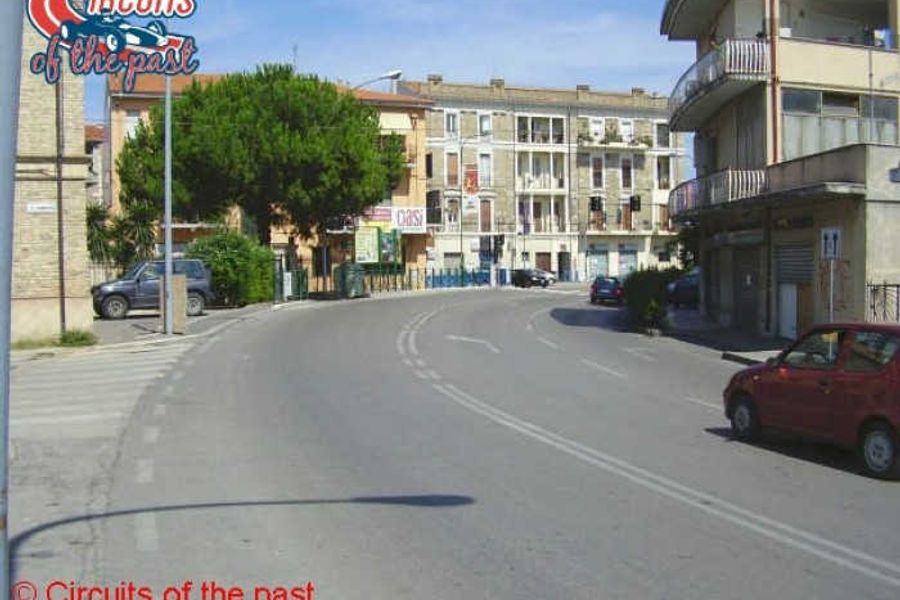 Pescara was a 15.89 mile long street circuit in Italy. It had a triangular shape with start and finish in the suburbs of the city of Pescara. The circuit contained two four-mile straights with an endless series of corners between.

The lap ran through Pescara and the villages of Villa Raspa, Spoltore, Cappelle sul Tavo and Montesilvano. To reduce speed on through the startline, a small detour was built in 1934, the first ever artificial chicane in a circuit.

Another curious detail about the circuit was the so called ‘Flying Kilometer’. This was a classic version of the modern speed trap and at the end of the first long straight, between Cappelle and Montesilvano.

Here they clocked the time and calculated the average speed. In 1950 Juan Manuel Fangio reached an average speed of 192mph through the Flying Kilometer.

The Pescara street circuit was used for the first time in 1924 for the Coppa Acerbo, named after Tito Acerbo, a war hero and brother of Giacomo Acerbo, a prominent fascist politician. After World War Two it was renamed the Pescara Grand Prix.

In the 1950s Pescara hosted several Formula One races, but only the 1957 edition counted for the World Championship. That race was won by Sir Stirling Moss in his Vanwall, in 2h59m22.7.

The last race at Pescara was in 1961, the circuit by now regarded as too dangerous and it stopped being used. Today the roads are still there and almost untouched, with only a few roundabouts added to the former circuit. On the road between Spoltore and Cappelle sul Tavo is now a memorial that reminds everyone that this was once a race circuit.

In 2007 I visited the Pescara street circuit on a very hot summer day. At that time I didn’t film circuits, but made photo tours. You can imagine that a single lap cost me more time than Sir Stirling Moss used for the whole Grand Prix in 1957.

It also cost me a lot of sweat at these high temperatures, but it was worth it. After many stops I parked my car near the railway station of Pescara, to explore the start/finish area by foot. I had a print of an old picture where you could recognize a house.

I asked some people if they recognize the house. An older Italian man told me a lot of houses were demolished since the 1950’s. I was not hopeful of finding it, but just as I sat down for a rest I looked in the direction of startline and got a surprise… there was the house from the 1957 picture!

They had even painted the start/finish line on the road, and there was a small grandstand. I didn’t know what the reason was, but it made it a lot easier to find. More difficult was trying find where the chicane was. I took pictures of a side street that I suspected was the location.

So after a long lap on the longest Formula One circuit ever I went back to my hotel in Riccione, 155 Miles north of Pescara. Tired but satisfied, after visit one of the greatest classic circuits ever. 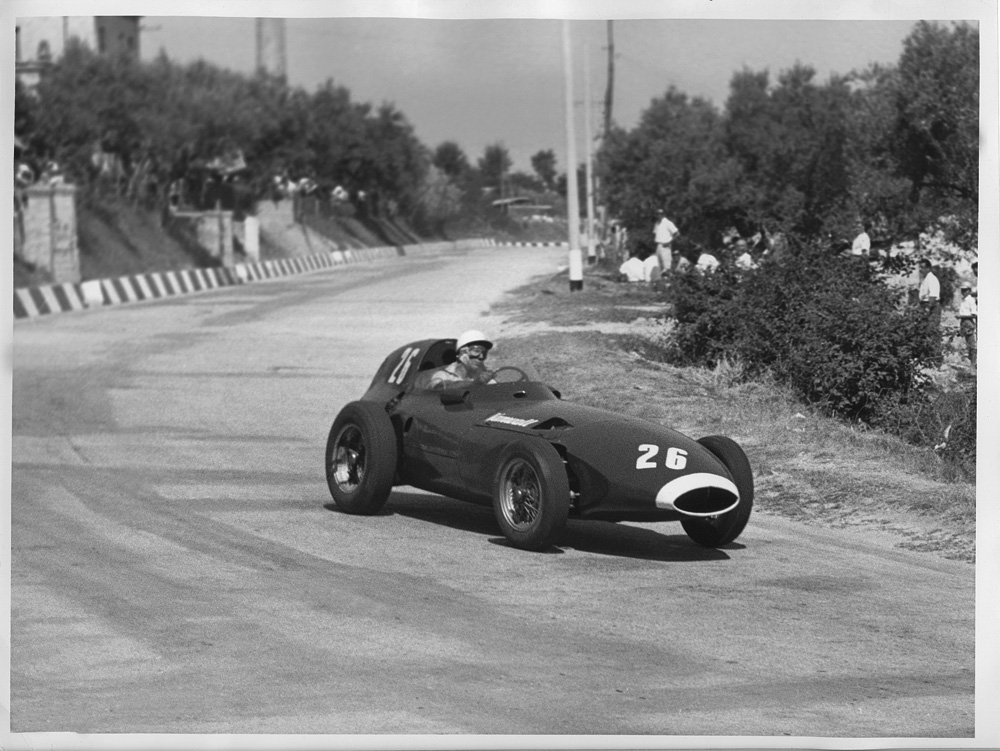 The 1957 race was held in the morning due to the hot weather – Moss winning before lunch! In a characteristic fit of pique after criticism when one of his cars had crashed and killed spectators in the recent Mille Miglia Enzo Ferrari declined to send his team to the race, finally relenting and sending one car and a few mechanics for Luigi Musso, Mike Hawthorn and Peter Collins having to sit the event out.

Juan Manual Fangio was on pole, but was headed off the line at the start by Musso and Moss, and when the Englishman took the lead on the straight to Montesilvano he was never again headed. An estimated 200,00 spectators watched the 16 cars contesting the race, in a relaxed atmosphere of trackside picnics and even reports of spectators wandering onto the track only to move aside as a race car approached – the Vanwalls with their relatively quiet four-cylinder engine making the odd heart race!

At the back of the field were the Coopers of Jack Brabham (who had acted as co-driver for the team transporter on the long run from Britain) and Ray Salvadori, who had their own battle once they realised that their two-litre cars could not match the speed of the front-engined front-runners on the straights. That led to one of the more bizarre pit-signals in the history of Formula One.

Salvadori clipped a road-side stone marker and pitted his Cooper, retiring with a bent suspension arm. As Brabham continued to circulate alone in the rising heat, his team-mate was trackside holding up a large piece of cardboard with the words ‘Gone Swimming’ emblazoned on it.