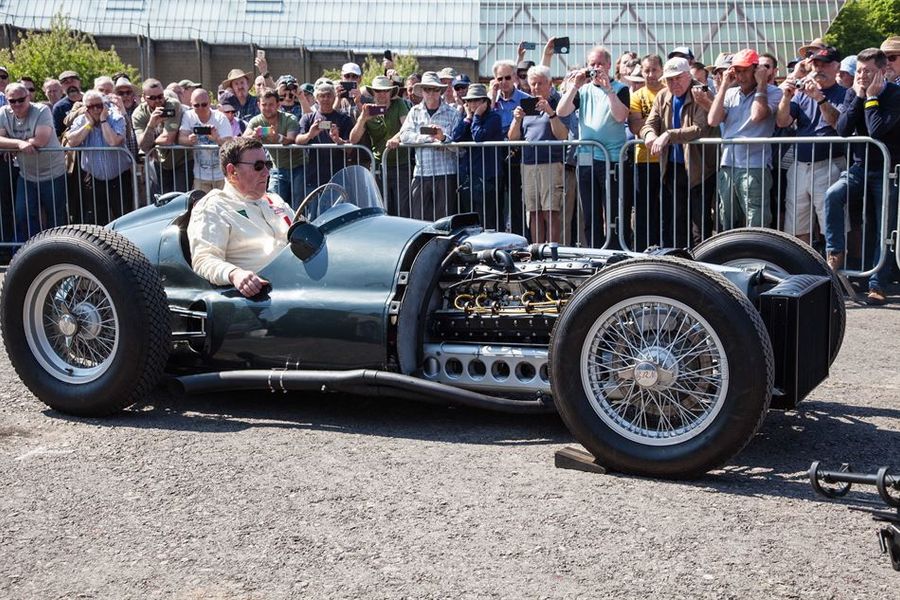 Hundreds of Beaulieu Spring Autojumble event-goers watched the National Motor Museum Trust’s 1950 BRM V16 roar into life with the first start-up of its newly restored engine last weekend.
Chief Engineer and National Motor Museum Manager Doug Hill took to the wheel of the car which was designed of the start of Formula One. The engine run also marked the launch of limited edition timepieces created from the BRM’s original pistons.

In an emotional reunion with the BRM, 77-year-old visitor Tony Draper travelled from his home in Yorkshire to see it for the first time since childhood. His  father worked on the car as an engineer for BRM and Tony treasures a picture of himself taken with the BRM nearly 70-years ago.

Beaulieu Events Manager Judith Maddox said: “We really couldn’t have asked for better weather. The sunshine was perfect for the start-up of the BRM, which was certainly one of the highlights of the show, and visitors loved the sight and sound of this incredible racing car.”

In period the BRM’s 1500cc V16 engine was renowned for it’s exhaust note, but the complex engine was ambitious in design. It featured four blocks of four cylinders with a central half-speed power take-off, and a two-stage centrifugal supercharger.

Designed to achieve 600BHP, it was some time before the it even reached 440BHP for a variety of reasons. Engine breathing proved more restricted than expected, leading to the supercharger having to be run at a higher speed than originally anticipated. The planned fuel injection proved a failure and the engine ran on S.U. carburettors.

Under pressure to race the car, BRM entered two cars for the 1950 International Trophy at Silverstone, but both suffered cylinder lining problems in testing. A major effort from BRM got one car onto the grid - and at the start when Raymond Sommer let out the clutch a driveshaft sheared and the car was retired having barely moved.

A number of the top drivers of the period raced the V16, including Juan-Manuel Fangio, but it was never a match for continental opposition and Stirling Moss was scathing of its capabilities.