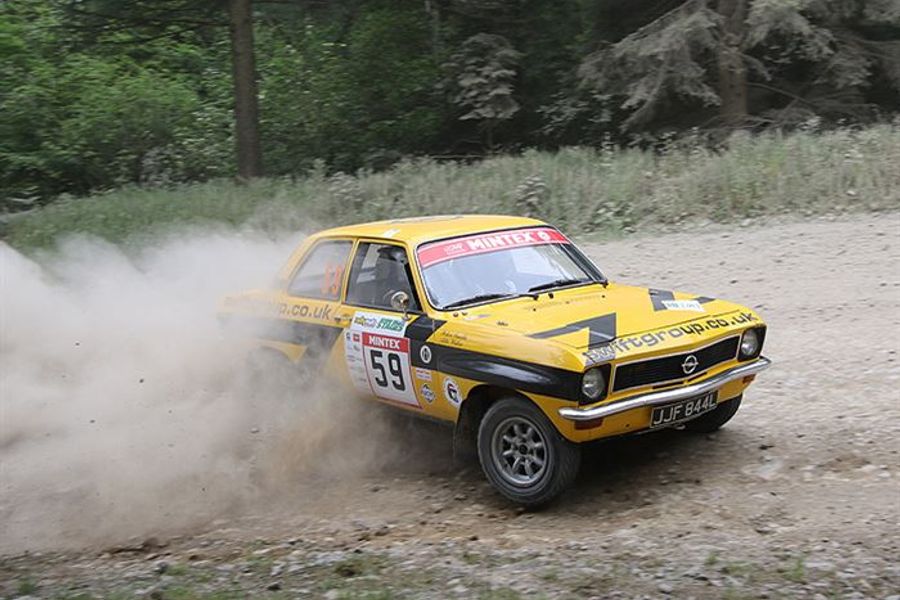 The 2016 Mintex MSA British Historic Rally Championship heads to South Wales for round six, the Red Dragon Rally on Saturday 20th of August.
After five rounds, Irish ace Paul Barrett heads the overall points’ table after a fabulous campaign in his Pinto-powered Ford Escort Mk2. However, Barrett is not entered at the time of writing and may be using this as one of his dropped scores as the championship will be decided on the best six scores from nine scoring rounds.
This is the first time that the Port Talbot Motor Club event has been a BHRC round and it has drawn a modest but strong entry. The recent issues over forestry charges have forced the organisers to base the event wholly within the Walters Arena complex and forests and the reduced special stage mileage means that some of the farther-travelled competitors have elected not to enter. However, the entry remains strong on quality.
The Roger Albert Clark Rally Motor Club promotes the MSA BHRC under a five-year contract and 2016 is the second year of that agreement. The calendar covers six gravel and two asphalt rallies, with a double-header on the Isle of Man in September to make nine rounds. The team at Special Stage is filming all eight events and produce hour-long programmes to give the BHRC some of the best TV exposure in British rallying.
For Jason Pritchard and Phil Clarke, this really is a crunch event for their Ford Escort Mk2. They have failed to finish the last three events and know that, above all else, they must finish this rally if they are to get scores in six rounds for their title defence. They head the Holton Homes Category K for cars prepared to FIA Appendix K regulations
Nick Elliott and Dave Price are back in action after missing the recent Harry Flatters and head the RSR Historic Engineering Category 3 from fellow Escort Mk2 crew Joe Price and Chris Brooks. The pace of these two crews will be fierce and they will battle with Pritchard for overall historic victory.
However, Steve Bennett/Paul Spooner and Simon Webster/Jez Rogers are showing ever-increasing pace and could well be challenging the big three. Meanwhile, Ben Friend and Cliffy Simmons have been mighty this season in their Pinto-powered Escort Mk2 and will be battling with the more powerful cars. Category 3 variety includes the Sunbeam Lotus of Guy Anderson/Steven Davey and the Triumph TR7 V8 of David Kynaston/Andy Russell.
Stanley Orr and Guy Weaver are having a mighty season to head the Capital Construction Category 2 with their Pinto-powered Ford Escort Mk1, but may miss this event and leave it open for a Yorkshire battle. Warren Philliskirk/Nigel Hutchinson (Ford Escort Mk1) and Peter Smith/Alun Cook (Opel Ascona) are the leading contenders, while in class C2 for the 1600cc cars there should be a contest between the Escort Mk1s of Stuart and Linda Cariss and Mal Bayliss/Siobhan Pugh.
In the Vintage Car Radiator Company Category 1, for the pre-1968 cars, the standard should be set by father and son Bob and Dale Gibbons in their Ford Cortina GT.
Pinto-powered Ford Escort Mk2 Paul Barrett Red Dragon Rally South Wales 2016 Mintex MSA British Historic Rally Championship