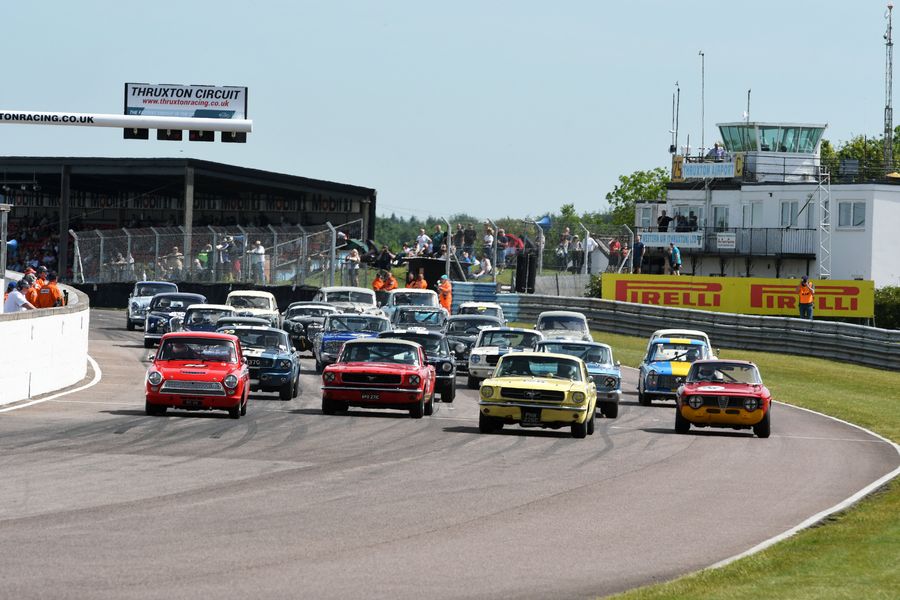 Thruxton circuit played host to a successful opening day of the inaugural Motorsport Celebration as thousands of spectators were treated to a strong programme of historic racing.

A widedisplay of classic cars were on show at the UK’s fastest racetrack as the retro-themed festival – powered by Motor Sport Magazine – built on the success of last year’s hugely-popular 50th anniversary meeting.

A foggy morning gave way to a glorious summer’s day in Hampshire as the on-track action began with consecutive qualifying sessions for each of the seven grids in action.

The Historic Touring Car Challenge with Tony Dron Trophy set the tone early on as the Ford Sierra RS500 of Paul Mensley spat flames from the exhaust at every gear change, much to the delight of the crowd.

A crowd packed full of families used the lunch break to take advantage of a host of off-track attractions available in the trade village, from merchandise stalls and food vendors to supercar displays, skid-pan experiences and car clubs – with the Porsche Club GB and the Ford GT40 Enthusiasts Club pitching up in the summer sunshine.

Meanwhile, the state-of-the-art Thruxton Centre offered unparalled views across the circuit and the two-story flagship hospitality building provided the perfect vantage point to see the Battle of Britain Memorial Flight flypast as two glorious WWII Spitfires completed their runs over the festival.

On-track, local Bennetts British Superbike Championship star Tommy Bridewell showed off his 2019 Oxford Racing Ducati before a collection of spectacular cars spanning half a century were let loose for a hair-raising demonstration.

An iconic Lola T70 Mk38 led the way from the thunderous V8 Lola T332, a wonderful Chevrolet-powered Cooper Monaco T61 and a Formula Atlantic Chevron B49. The quartet were followed by the throaty Reynard 89D which was raced by Marco Apicella in the 1989 Formula 3000 season and has since been lovingly tended to by Edginton Racing.

Thruxton then wound the clock back even further with the HRDC ‘Coys Trophy’ for Touring Cars 1958-1966 throwing up some spectacular slip-streaming around the high-speed circuit, despite it being over half a century since the machines rolled out of the factory.

This race saw one of the stories of the weekend as the Ecurie Ecosse Jaguar XK120 and the Frazer Nash Le Mans Replica competed against each other for the first time since the 1952 British Empire Trophy race on the Isle of Man.

It was then the turn of the FJHRA/HSCC ‘Silverline’ FJ Championship Front-Engined grid to wow the crowds as they relaxed on the iconic banking around the Thruxton Circuit, before the U2TC for pre-66 under two-litre Touring Cars rounded out the day with an eventful 30-minute sprint.

There will be further on-track demonstrations including a run from British Superbike ace Danny Kent as well as another flypast from the Battle of Britain Memorial Flight – this time conducted by a legendary Dakota C-47.