Video: Race to the City 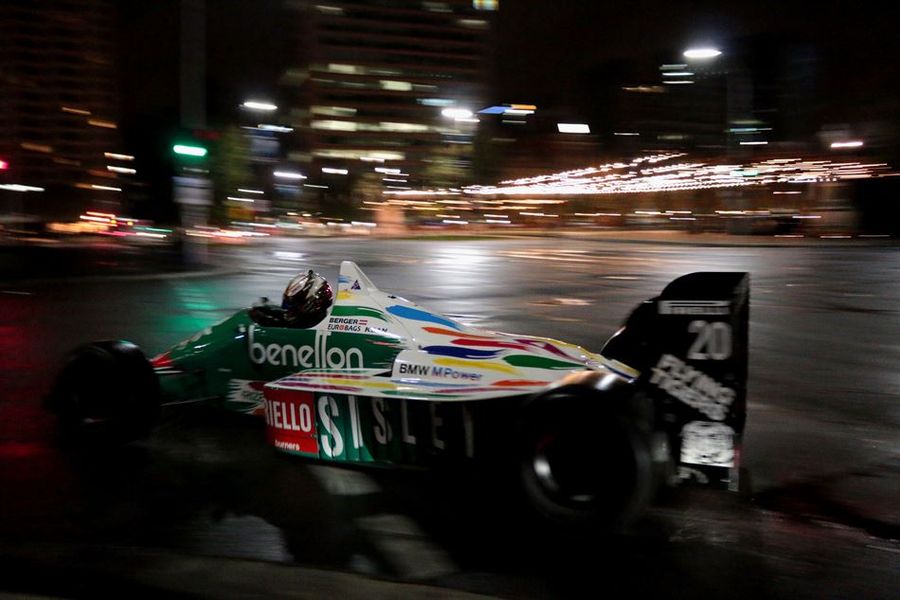 Click on the Video tab for the short movie!
A short film officially launching the 2018 Adelaide Motorsport Festival (December 9th-10th) has been released today, featuring some of the biggest names in Australian Motor Sport and some stunning machinery, sights and sounds.
Filmed over a single day and evening in late September this year, the stunning film showcases three-time World Superbike Champion Troy Bayliss, 1995 Australian Touring Car Champion John Bowe and Supercars young-guns Cameron Waters, Tim Slade and Josh Kean driving through the Adelaide city streets en-route to the start line of the famous Victoria Park street circuit.
The highly orchestrated and undercover activation involved Bayliss driving a Ducatti Superbike, while Bowe was behind the wheel of an original Holden Dealer Team A9X Torana.
Three class Formula One cars representing three eras of the sport – including two that raced in Adelaide – were arguably the stars of the show.
Adelaide young-gun Kean drove a V10-powered Arrows A21 raced in the 2000 Formula 1 season by Jos Verstappen, while fellow South Aussie star Tim Slade enjoyed a Ford Cosworth V8-powered 1994 Footwork Arrows FA15.
Recent Sandown 500 winner Cameron Waters drove the Benneton B186, powered by a four-cylinder turbocharged BMW engine that in its day produced more than 1,300BHP.
Supercars driver Josh Kean – a regular in Formula 1 Machinery at the Adelaide Motorsport Festival – said the experience of driving the 800hp Arrows was one to remember.
“It was something very interesting! The car revs to 17,000 RPM and trying to keep it tame was very difficult,” he said.
“The car idles at five-grand so it was pushing me through the corners because I was trying to go slower. It was so exciting.
“It is one of the coolest things I’ve done – the surprise of everyone around us was awesome.
“I think it’s going to blow everyone’s mind. I hope it gets a lot of people here for the event. These cars are very cool and interesting and there’s not many times you get to see things like this happen.”
The Adelaide motorsport Festival will be held between December 9-10 in Adelaide, South Australia, with the classic Formula 1 cars the highlight of the weekend long festival, that includes the Adelaide Rally (running through the Adelaide Hills) and a multitude of on-track activities at Victoria Park.