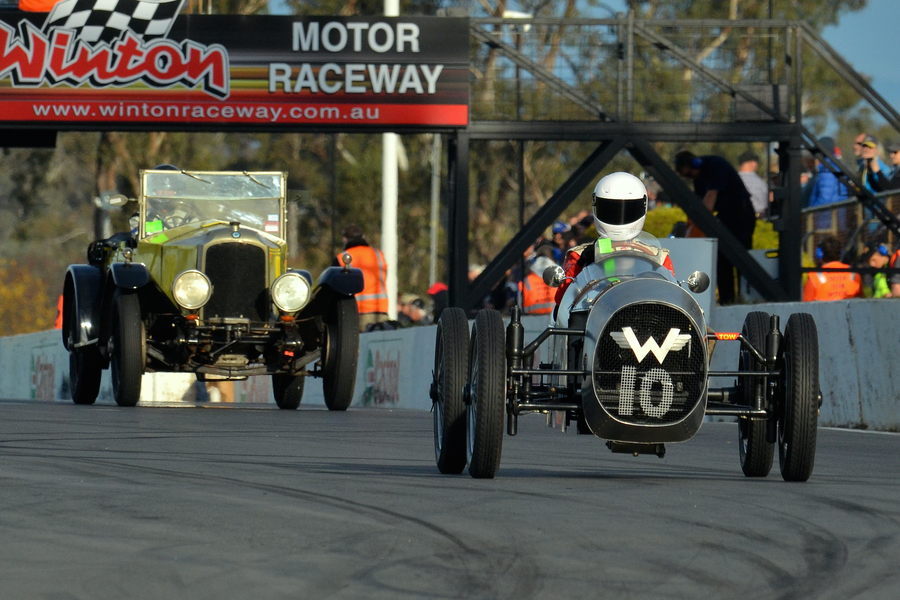 Eric Cossich from Echunga, in regional South Australia, is ready to race in regularity with his Flying W - The Wolseley Special Number 10 for this year’s Historic Winton.

This year will be Eric’s fifth-year racing at Historic Winton: “it is one of the few tracks, where you can stand on any one place on the Winton Track and see the whole race like Wakefield Park Track.  Spectators can also walk through all the pit areas and talk to anybody. You can go into the sheds. You can’t do that with the V8s, modern car racing.”

Growing up on cattle and sheep stations, Eric was heavily involved in cars from a young age. His early experience and love for cars inspired him to take on the challenging journey of rebuilding the 1955 Flying W. Today, four years after the rebuild was completed Eric said, “The car performs incredibly well and is incredibly reliable with no mechanical issues. It’s a credit to the Fechner Bros and Henderson who built/designed the original car.”

To make the rebuild possible, Eric managed to inspire a group of men ranging from their twenties to fifties. Eric is passionate about historical car racing not only for himself but the generations to follow.

“We need more young people involved and behind the historic car scene now more than ever, so that it continues,” he said.

This Flying W story begins with three young lads, just as the second world war drew to a close in 1945 when they were taken to Strathpine Airstrip on the outskirts of Brisbane to watch car racing. For brothers Rob and Brian Fechner and their friend Len Henderson, this began a life-long a love of cars, particularly fast ones.

It was at the Brisbane EKKA in 1954 that the trio saw a 6/80 Wolseley motor mounted on a stand. They admired the engine and wondered out loud how best to beat the likes of Glyn Scott and Wal Anderson in their new Holden specials.

By July 1954, plans for a new car had been roughly drawn up and work began. A model T Ford chassis was chosen for the base, this was to be married to a Lancia Lambda front end and a Lancia Lambda diff mounted via 1⁄4 elliptic springs and their own design of suspension arms.

Just as the trio were about to start work Len heard about a Wolseley 6/80 engine for sale at a Salisbury firm, which Rob believes was the forerunner to Coates Hire. The story they heard was that a loco engine had been dropped on the Wolseley at the dock and the engine was salvaged from the wreckage. Although it was new, it was missing the distributor, manifold fan and clutch but could be bought for 50 pounds. Three pairs of hands grabbed it with glee!

The body was made of 3⁄4” x 1/8” flat steel hammered to shape and onto which was riveted sheet aluminium. As the body was fitted and the grille bolted in place someone wondered about putting a W for Wolseley on the front. A friend looking on suggested the winged ‘M’ on his Matchless motorcycle looked the part. Out came the tin snips and presto, a variation of the ‘Flying M’ was created and the ‘Flying W’ of The Wolseley Special Number 10 was born.

The car was completed on February 18, 1955 at a cost of roughly 250 pounds and took seven months, working in their spare time.

Gaining several respectable race results during the subsequent year, the last time the Special raced was at the Burleigh Hill Climb May 17, 1956. With Len Henderson in the driver’s seat, the car claimed second fastest time in the Unlimited Racing Car Class. This shows the Wolseley/Lancia combo was a very reliable and competitive car particularly when racing against larger capacity and much more expensive makes, from MG through to Jaguar and Alfa Romeo, to name but a few.

Unfortunately, The Special was eventually cut up and the back end used for a dewatering pump and no longer exists as such.

It was more than ten years ago, Eric contacted the Wolseley Car Club. The club put him in touch with Queenslander Bill Martin who was in possession of the original engine. Eric then applied to CAMS for an Application in Principle to rebuild the car. One of the conditions is that it has to ‘look’ exactly like the original, so no fancy bits can be added to the car.

Eric accumulated all the pieces for the tribute. He rebuilt the engine and used all the original Wolseley dash gauges, (small rectangular cream face) except for the Tachometer.  A matching round dial tachometer was located in the USA.

Eric’s work has seen the historic ‘Flying W’ returned to its former glory. The Historic Winton weekend commences on 17th May with the Benalla and District Classic Car and Motorbike Tour and continues with two big days of ‘edge of your seat’ heritage car and motorbike racing on 18 and 19 May.