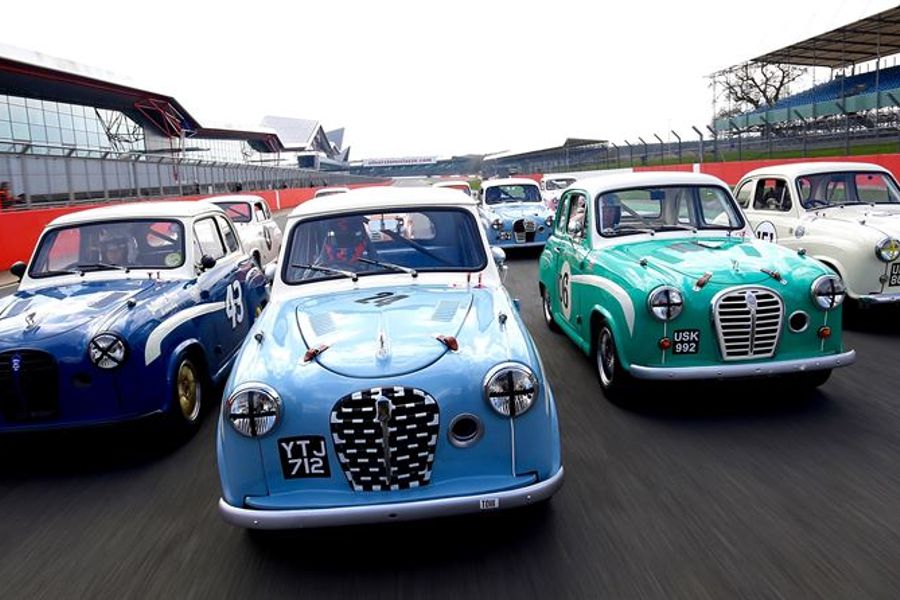 Acting legend Sir Patrick Stewart OBE is preparing for an new challenge – he’s rehearsing to be a real-life racing driver at this summer’s Silverstone Classic (Saturday 29th July).
The 76-year-old movie star who famously played Captain Jean-Luc Picard in the sci-fi series Star Trek: The Next Generation as well as Professor Charles Xavier in the X-Men films has just passed his official ARDS racing driver test at the Silverstone Motorsport Academy and is now ready to compete in a special Celebrity Challenge Trophy Race taking place at the world’s biggest classic motor racing festival in late July.
“It was a lot of fun,” reported a delighted Stewart who passed both written and driving tests required to obtain a MSA competition licence at Silverstone. “For someone who has followed motor racing since being a teenager, to drive around Silverstone and negotiate such legendary corners as Becketts and Stowe is just such a thrill.”
Surprisingly, perhaps, for a self-confessed motor sport fan who, on the silver screen, has travelled around the universe at warp speeds, the Hollywood actor claims he rarely puts the pedal to the metal. “Speed is not a particularly big passion of mine,” he says. “But when you are behind the wheel of a nice car it’s quite exhilarating to open it up, and I am looking forward to the Classic race meeting very much. Everybody has got a little bit of competitiveness and aggression about them, so it will certainly be entertaining!”
Other famous faces lining-up on the star-studded grid alongside Stewart include Olympic gold medalists Mark Hunter MBE, Jason Kenny CBE, Greg Searle MBE, Jonny Searle MBE and Amy Williams MBE, bike racing world champions Wayne Gardner and Freddie Spencer, former England test cricket captain Mike Gatting OBE, Dragon’s Den TV star Theo Paphitis, former Top Gear presenter Tiff Needell, Wheeler Dealer’s Ant Anstead and adventurer Charley Boorman as well as a host of other famous faces from sport, film and television. All be helping to raise funds and awareness for the Classic’s official charity partner Prostate Cancer UK.
Fuelling the Silverstone Classic’s nostalgic atmosphere, the impressive posse of celebrities will be racing competition-prepared Austin A30 and A35 saloons, harking back to the late fifties. The race programme will be split into two parts. Owners of the charismatic Austins will qualify on Friday and race on Sunday with the celebrities in action on Saturday.
The cars are well-known in classic racing circles and were introduced a few years ago by the Historic Racing Drivers Club (HRDC) as a cost-effective route into historic racing. More than 50 have now been built, guaranteeing this enormous grid – not to mention some unmissable enjoyment for contestants and crowds come July.