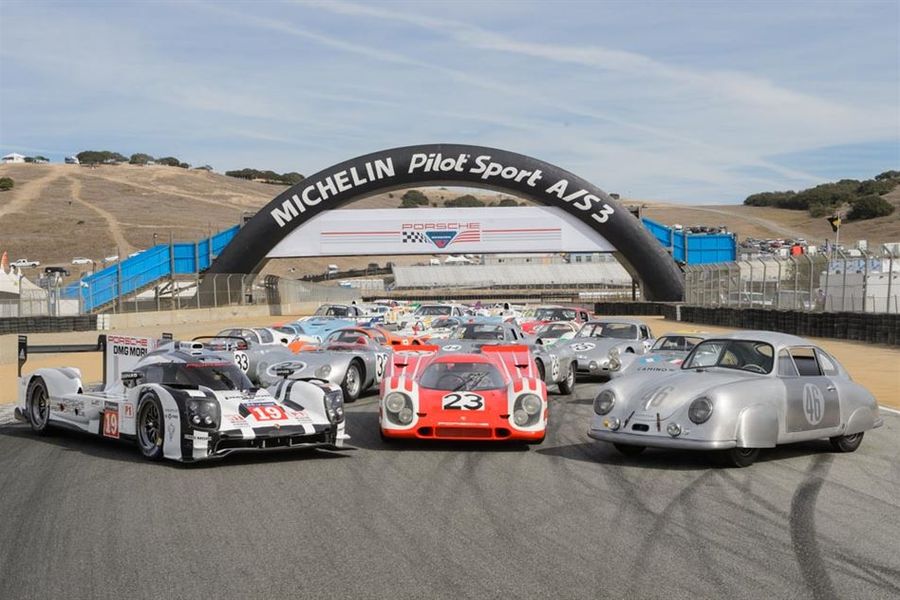 Porsche Cars North America (PCNA) and Mazda Raceway Laguna Seca today announced the next Porsche Rennsport Reunion will take place at the famed California race track in 2018. The upcoming Family Reunion has been expanded to four days and will be held September 27th-30th, 2018.
In what has become a tradition, Rennsport Reunion VI will bring together an extraordinary gathering of significant Porsche race cars, as well as those who have designed, engineered, and driven them to victory in the world’s most famous sports car races. Hosted by PCNA, the four-day program of on-track competition will be complemented by a Concours d’Elegance, which is open to invited race participants.
After staging the first three events in the east, with the inaugural at Lime Rock Park in 2001, followed by two events at Daytona International Speedway in Daytona Beach, Florida in 2004 and 2007, Rennsport Reunion IV moved west in 2011, tapping into a vast array of west coast car aficionados and Porsche enthusiasts. Returning to a three-year interval, this incomparable event has turned into a world-wide happening.
“Choosing the Monterey Peninsula once again for our unique Porsche family reunion builds upon what we learned from previous Rennsport Reunions,” said Klaus Zellmer, President and CEO of Porsche Cars North America. “We had close to 60,000 fans, enthusiasts and owners come through the gates of Mazda Raceway Laguna Seca to celebrate with us in 2015, and California’s picturesque central coast provides an ideal backdrop. The Golden State as a whole has always been like a second home to Porsche.”
“We are honored to have been selected once again as the host circuit for Porsche Rennsport Reunion,” said Gill Campbell, of Mazda Raceway Laguna Seca. “This prestigious event has created a tremendous impact on motorsports around the world in the past and we are eager to bring it back to life again in partnership with Porsche. It is truly the most rewarding event I have ever had the pleasure of being involved in.”
During Porsche Rennsport Reunion V in 2015, over 1,300 Porsche Club of America (PCA) member-owned Porsche models helped fill the show fields, race classes, and parking lots of Mazda Raceway Laguna Seca to overflow capacity. For the upcoming sixth rendition, the PCA will once again play an integral role in the festivities.