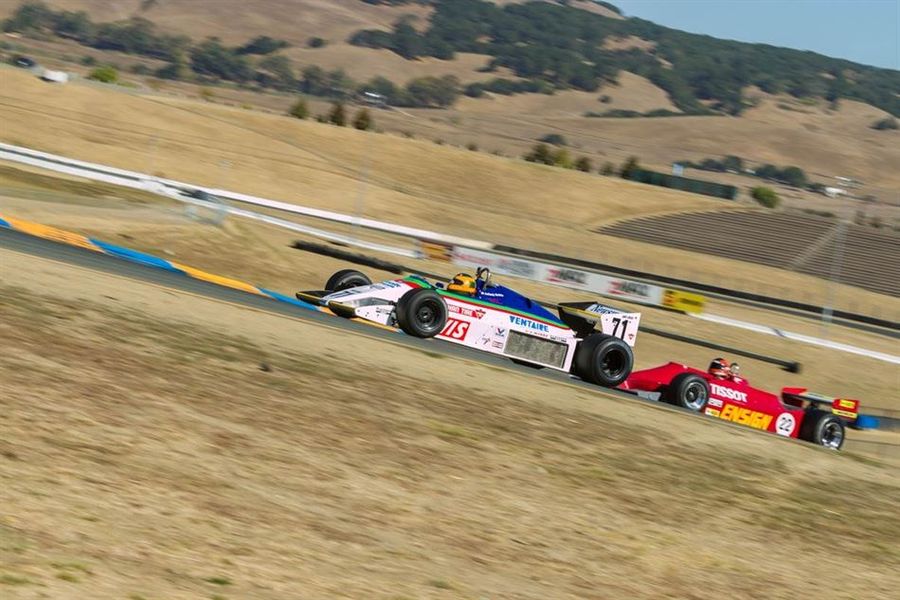 Nathan Kinch was unstoppable at Sonoma in the CSRG Charity Challenge for Masters HGP cars. The Brit, in his McLaren MP4/1B, won both races at the Californian circuit having been the man to beat in the qualifying session as well.

Kinch started the opener from pole and scorched his McLaren into the lead, coping with temperatures reaching 34 degrees. On the twisty circuit, he built his advantage to win from Bud Moeller (ex-Derek Daly Ensign N177, pictured) who rocketed his way up from sixth on the grid and local hero Steve Cook (March 741) who was the best of the Pre-1978 division drivers. Having qualified an impressive second fastest, Cook took an excellent third in the first race, belying the age of the car. Behind him, Sean Allen (McLaren M30) secured fourth place ahead of four-times World Motorcycle Champion Eddie Lawson who was fifth in his Masters HGP debut driving a Wolf WR4, after a race-long tussle with Greg Thornton (March 761) and Martin Lauber (Wolf WR6).

The race sadly lost John McKenna’s Parnelli after a rear tyre blew and he went off the road, the car being forced to skip the second race as well.

Kinch blasted clear at the start of the second race and once more was able to establish a lead, although the race had to be halted early after late-entry Michael Eckstein crashed his Williams FX3B. Behind Kinch, Moeller chased hard in his Ensign to secure second place. Cook’s impressive pace in his ex-Hans Stuck March continued as he ran third early on, but a cracked fuel line ruled him out of the race. That allowed Martin Lauber up to third after a great scrap with Greg Thornton’s March, while new four-wheel convert Lawson bagged fifth from Allen’s McLaren. Chris Locke (Lotus 77) was seventh ahead of Nic Colyvas (Shadow DN5) who took eighth despite a spin, while Scott Drnek took ninth in John Delane’s Tyrrell 002, its owner having raced it on Saturday.