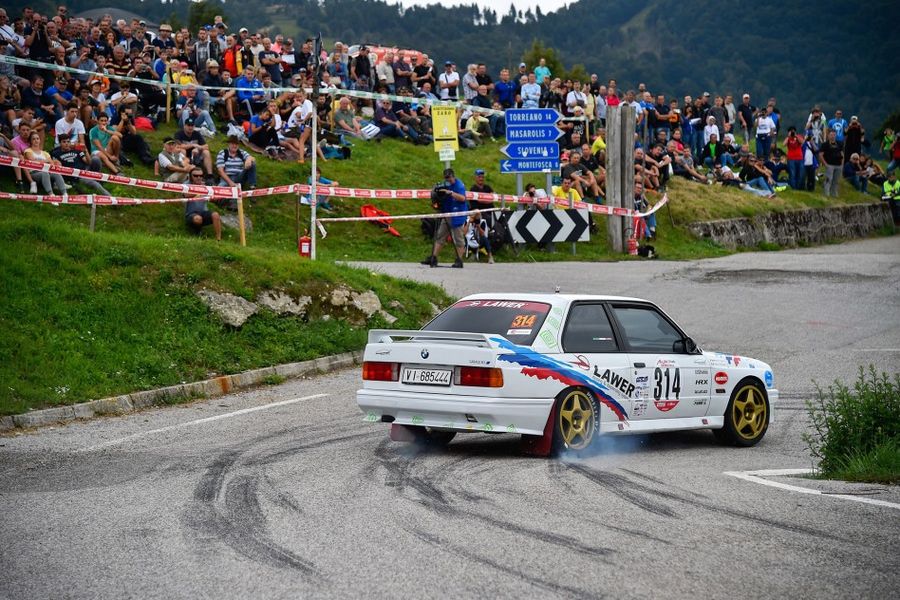 After the gravel roads of Finland, the 2019 European Historic Sporting Rally Championship heads south to Italy with the Rally Alpi Orientali Historic hosting Round 7.  This will be the first of two visits to Italy, with the Rally Elba Storico being held on 19-21 September. A total of 61 entries have been received by the organisers of the Rally Alpi Orientali Historic, with 26 eligible for championship points.

Championship leaders ‘Lucky’ and Fabrizia Pons will once again be challenging for the overall win on the roads around Udine. The Italians have won three times so far this year but decided to sit out last month’s gravel event, the Lahti Historic Rally in Finland.  They currently hold a slim one point advantage in their Lancia Delta Intergrale with 73pts, compared to the 72pts of Britain’s Will Graham, who won the Category 4 event in Finland along with co-driver Michael Johnston in their BMW M3.

Sweden’s Mats Mysell and Esko Juntilla will also return to the fray with the Porsche 911SC they competed with in Austria. Reigning champions Valter Jensen and Erik Pedersen also make a welcome return in their BMW M3, with Alberto Battistolli and Luigi Cazzaro making their second appearance in the Ford Sierra RS Cosworth.

CATEGORY 3: Peltonen leads but ‘Zippo’ looking for victory at home

Esa Peltonen and Jyrki Saarto proved to be the gravel kings at their home event in Finland in their Toyota Starlet. The Finns are currently leading the Category 3 championship by six points on 78 points. Italian ‘Zippo’ is currently on 72 points in second place and he will be looking for his third win of the season.  He will be joined by Denis Piceno in the Audi Quattro.

Pentti Veikkanen and Timo Jaakkola are on 70 points in the Porsche 911 SC, with reigning champions Karl Wagner and Gerda Zauner in fourth place on 68 points in the distinctive bright yellow Porsche 911 SC, the winners in the Czech Republic and in Asturias hoping to get back to the top of the championship table in Italy.

After competing at his home event in a Chrysler Avenger, Finland’s Klaus Wilkman is returning with his red, white and blue liveried Triumph TR8 in Italy, with Vesa Suhonen replacing Hanna Valonen in the co-driver’s seat.

The Opel Kadett C Coupe of Zsolt and Kornel Kalapacs will also be competing on the Rally Alpi Orientali Historic meaning that the currently top six contenders for the 2019 Category 3 title are all competing in Italy this weekend.

CATEGORY 2: All change in Italy?

With championship leader Carlo Mylle not competing on the Rally Alpi Orientali Historic, the way is open for a new title leader on Saturday evening. Paolo Pasutti is currently eight points behind Mylle in Porsche 911 RS which Giovanni Campeis is leading the Co-Drivers title race, both competitors on 59 points.

Laszlo Mekler and Edit Mekler-Miko will be competing in their beautifully prepared Alfa Romeo GTAM, the Hungarians on 55 points. Their compatriots Peter Magross and Laszlo Ronay are just seven points behind on 48 points in their Alfa Romeo GTAM.

Anders and Ingrid Johnsen will once again be at the sharp end of the Category 2 battle in their Porsche 911 RSR. The Swedes will be hoping for better luck in Italy after retiring from the lead in both Austria and Finland.

Italian crew Maurizio Pagella and Roberto Brea will be competing on their home event in the Porsche 911 RS, while compatriots Pietro Corredig and Sonia Borghese will be in their BMW 2002TII.

Anglo-Irish duo James Calvert and James O’Brien will be back out in their Volkswagen 1303S after competing in Finland in a Category 1 Ford Lotus Cortina.

After winning the Category 1 battle in Austria and Finland Ernie and Karen Graham have gathered 89 points, the same as championship leaders Antonio Parisi and Giuseppe D’Angelo.  The British couple are once again competing in their Ford Escort Twin Cam, while the Italians will be in their Gulf liveried Porsche 911S.

Finland’s Elias Kivitila and Timo Tuominen are currently in third place on 71 points and will be competing in Italy in their BMW 2002 Ti. Another BMW 2002 Ti will be in the hands of Carlo Fiorito, the Italian on 60 points and he will joined by Marina Bertonasco for the Rally Alpi Orientali Historic.

Germany’s Heiko Dlugos makes a welcome return to the EHSRC in the Ford Escort. Dlugos will be joined by Hungarian co-driver Zsolt Thoth for the Italian rally. Another Ford Escort will be competing on the Rally Alpi Orientali, with brothers Tim and Steve Jones swapping their Category 4 Ford Sierra Cosworth for a Category 1 Ford Escort Twin Cam.

The Volvo 122 of Finland’s Jari Hyvarinen and Jarno Ala-Turkia will once again be competing in the FIA European Historic Sporting Rally Championship.

The Rally Alpi Orientali Historic will be the host event for round seven of the 2019 FIA European Historic Sporting Rally Championship the first of two Italian rounds in the next four weeks.

The Rally Alpi Orientali takes place in north east Italy in and around Udine and features over 150km of special stages in breathtaking scenery close to the border with Slovenia.