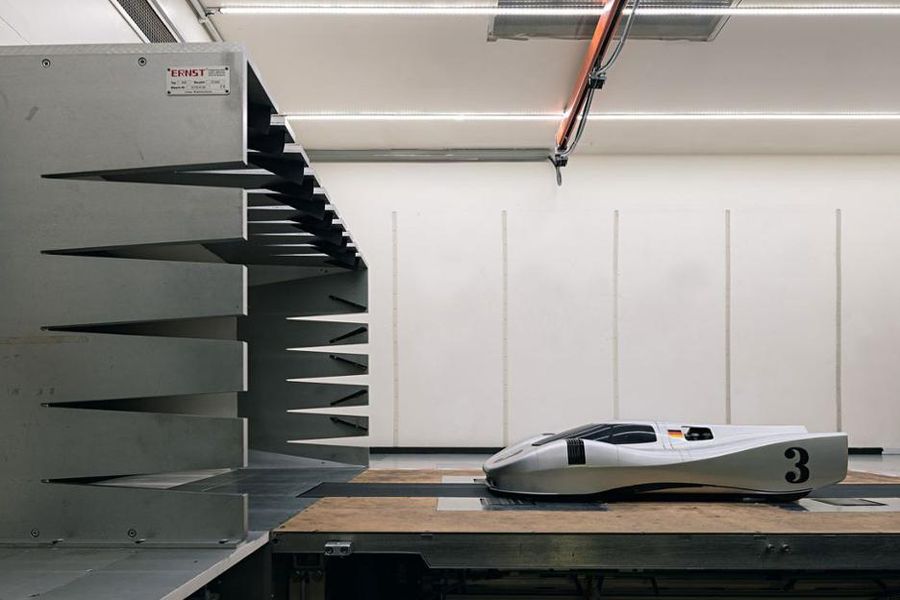 With the kind permission of Porsche AG we can again exclusively bring you the story of the discovery of a one-off model of an alternative Porsche 917 body shape, text by Jürgen Gassebner and photos by Max Leitner:

Quite by chance, a very special studio model of the 917 dating back to 1970 was found at the Weissach Development Centre – and it was almost as if it had been ordered for the special exhibition “Colours of Speed – 50 Years of the Porsche 917” at the Porsche Museum. This was the Porsche Design Studio’s alternative design for the 917/20 back in those days, the legendary “Sau”, or “Pink Pig”.

Porsche Development Centre in Weissach, 10 am, in the old wind tunnel. Porsche designer Anthony-Robert “Tony” Hatter, Head of Design Quality Style Porsche, is beaming at the slightly dusty studio model of a futuristic-looking vehicle on a scale of 1:4. This is the design draft of a short-tail Porsche 917 dating back to 1970. It’s extremely aerodynamic and designed to give the best possible cd value with absolutely no wheel cutouts. It also comes equipped with removable glass that allows us to peer into an interior that was extremely pioneering for those days. The switch units on the instrument panel are recognisable from the Porsche 928, and on the right-hand side there’s a kind of computer with a tape or disk drive. And a screen in the left half of the cockpit. Almost science fiction for its time.

“The designers were really looking to the future with this model. Basically, it followed me from 1986 onwards, when I started at Porsche, until the design department moved to a new building a good three and a half years ago. Up until then, our design studio had been situated in the basement of what’s known as the Sechskant, “the Hexagon”, the first big office building in Weissach. We went down to our studios via a staircase, where this model was attached by its four wheels to a high crossbeam facing the wall. It even had cockpit lighting, with a corresponding switch on the wall. In addition to the light, a tiny fan motor in the car came on when the switch was pressed and emitted a humming, roaring noise. Nobody remembers now whether the fan was simply a technical gimmick or whether it was actually used to cool the interior lighting,” says this British car designer, the man responsible for outstanding Porsche vehicles such as the 911 of the 993 generation or the 911 GT1 Series during his career. 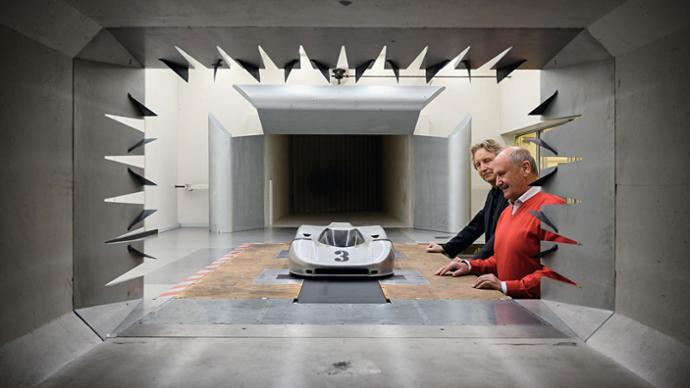 “Over the decades, the model just became part of the furniture and I no longer consciously paid any attention to it. It was just there. As part of the move, we took it down and put it somewhere. It was only recently that we found it in an old garage,” continues Tony Hatter.

Porsche was working with a two-pronged approach in aerodynamics development at that time. They worked in the wind tunnels of the FKFS in Stuttgart and the Eiffel wind tunnel of the Parisian Institute SERA.

Hermann Burst knows more about the development of this special 917 model. Until he retired from Porsche AG in 1992, this man from Timesheet was Head of Body Development. He then became managing partner of engineering service provider Rücker AG until he retired in 2006, and most recently he served on its supervisory board.

In the late 1960s, the young mechanical engineer specialising in automotive engineering worked as a research assistant at Forschungsinstitut für Kraftfahrwesen und Fahrzeugmotoren, FKFS, at the University of Stuttgart, where he was involved in wind tunnel tests for the automotive and aviation industries. In January 1969, he joined Porsche as an administrator in the racing department, where he worked on aerodynamics for the 917, 908 and series production vehicles.

From the outset, the aerodynamics of the 917 were developed by Charles Deutsch in the wind tunnels of the FKFS and in the Eiffel wind tunnel of the Parisian Institute SERA (Société d’études et de réalisations automobiles). Deutsch enjoys an excellent reputation as an aerodynamicist, and has proven this in the past with his own design. Although his CD SP66 only came with a 1.2-litre engine, it achieved a top speed of almost 300 km/h at the 1966 24 Hours of Le Mans thanks to its sophisticated aerodynamics. Reason enough to continue to use Charles Deutsch and SERA as a mainstay of development, and so work on the 917 was the start of many years of cooperation.

When thoughts turned to further development of the short-tail version of the 917 in mid-1970, the objective was to create a car that was equivalent to the long-tail version due to its reduced air resistance. And at that point, Porsche opted for a two-pronged approach – one car body design created at SERA in Paris, and another devised directly in-house under the direction of Porsche designer Richard “Dick” Söderberg. During this phase, Hermann Burst worked together with a small team of Porsche designers and modellers at the SERA wind tunnel in Paris.

As the car developed, the studio model moved further and further away from what Porsche was using on racetracks in those days. It became a collective pool of ideas devised by the Porsche design team, and details like a computer or a screen seemed almost like science fiction. 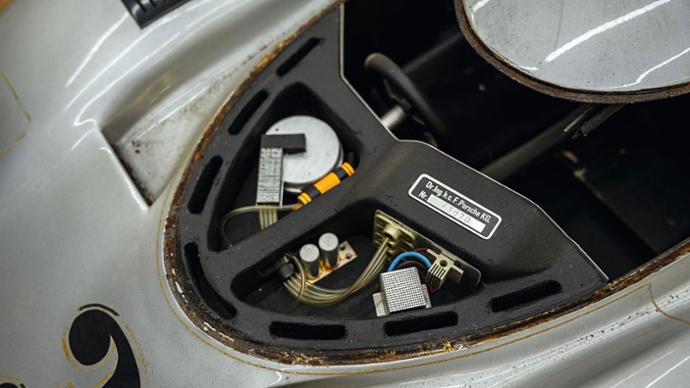 While the SERA design was finally built in 1971 as the 917/20 “Pink Pig”, started at Le Mans and became one of the best-known Porsche racing cars with its livery based on butcher-style cuts of pork, the 917 designed by Richard Söderberg with a two-part rear wing didn’t get far. “The design language of Richard Söderberg’s creation was far more aesthetic and elegant than the SERA development, but this model proved to be not all that good in the wind tunnel, especially in terms of uplift, and it wasn’t particularly convincing in this form. Although there was no follow-up order and the decision to build the SERA design had already been made internally, we decided to revise the model aerodynamically anyway,” says Hermann Burst.

“So we went back into the wind tunnel with this model and continued to develop it further. With all the knowledge I’d gained so far, I suggested modifying the model with a view to the proven aerodynamics of the 908/03 and its round nose shape, as well as the rear flowing upward. We filled the model with plasticine at the appropriate points, so not only did we achieve a good cd value, we also improved downforce values and acceptable crosswind behaviour. We’d achieved our goal from an aerodynamic point of view, but stylistically Richard Söderberg just wasn’t satisfied with it. Especially since the originally snow-white model was now disfigured with lots of brown plasticine, too,” continues Hermann Burst.

Porsche chief designer Anatole Lapine then gave the green light to perfect the model visually. The air diffusers on the upper side of the front wings were devised in detail, the windscreen and headlamp lenses were redesigned, and large, ultra-modern rear lights adorned the 917 model, which was now painted silver. Piece by piece, this 917 moved away visually from what Porsche was doing on racetracks at the time, and became more a collective pool of ideas from the Porsche design team.

While the bucket seat and the small three-spoke steering wheel are still very much throwbacks to racing, the instrument cluster looks almost like the kind of thing you’d find in a production car. In the 917, which was still designed as a right-hand drive, it was pulled a long way in on the left-hand side – with the controls facing the driver and hence the best ergonomics. An arrangement that would only be found in production cars many years later. “They even installed a screen back then,” Tony Hatter notes, pointing into the cockpit.

However, the innovative equipment details and the body, tailored entirely towards aerodynamic quality, went pretty much unnoticed for the next few years – apart from the layout of the controls in the Porsche 928 launched in 1977. It wasn’t until 1978 that this 917 model reappeared briefly, this time as the cover image for an article entitled “Porsche: the car of tomorrow”, in which this 917 was to provide a glimpse into the future alongside Porsche research projects such as the “long-term car” or the “SAVE” rescue system. This shows how visionary this model appeared to be, even eight years after it was created, and that the 917 was still firmly anchored in the minds of its designers.

More than 40 years later, this 917 model is now being presented to the public for the first time. As part of one of its most extensive special exhibitions, entitled “Colours of Speed – 50 Years of the Porsche 917”, the Porsche Museum will be honouring this legendary racing car from 14 May to 15 September, displaying a total of ten racing cars of this type and model. Furthermore, “Aerodynamics Study: Living Legend 917” pays homage to the legendary number 23 917 which Hans Herrmann and Richard Attwood drove to clinch the first overall victory for Porsche at Le Mans in 1970. 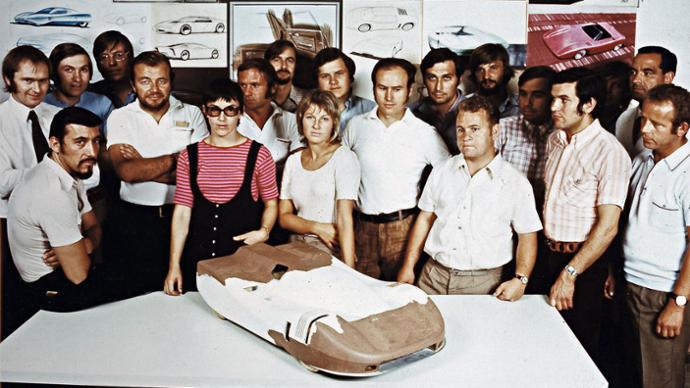