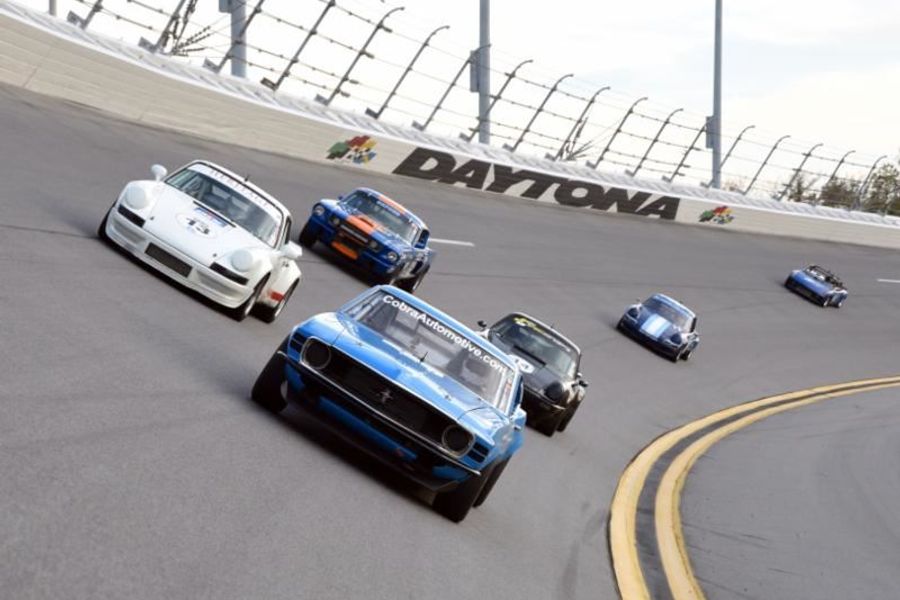 Historic Sportscar Racing (HSR) officials announced today the 2018 HSR race event schedule that features eight race weekends on legendary circuits throughout North America, including return engagements for some of the most notable events on the international historic racing calendar and confirmation that the globally popular HSR Daytona Classic presented by IMSA at Daytona International Speedway (DIS) will become an annual classic 24-hour race at DIS.
Set for its third running next month after last being run at DIS in 2015, the HSR Daytona Classic will now be an annual fixture on each year's HSR race event schedule. The 2018 HSR Daytona Classic is scheduled for November 7 - 11 of next year.
The new, every-year scheduling for the HSR Daytona Classic ensures that the 24-hour long vintage and historic race at the World Center of Racing will also be annually paired up with the sister HSR Classic 12 Hour at Sebring at Sebring International Raceway. The third-annual running of the Classic 12 Hour in 2018 will be held on the legendary Sebring airport circuit, November 28 - December 2.
Officially titled the HSR Classic 12 Hour at Sebring, Pistons and Props, presented by the Alan Jay Automotive Network, the Sebring Classic made a successful debut last December. The race will be run for the second time November 29 - December 3, 2017, and - in the debut of the back-to-back format that will be the standard in years to come - just 17 days after the third HSR Classic at Daytona presented by IMSA, November 8 - 12, 2017.
In addition to the "HSR Classics" events at Daytona and Sebring, both season-ending events will respectively host the traditional Daytona Historics and Sebring Historics races that annually bring each HSR championship season to a close.
Another 2018 HSR schedule highlight is the 41st Classic Motorsports Mitty at Road Atlanta, April 26 -29, that will showcase Nissan as the event's Featured Marque. One of the oldest historic and vintage races in the U.S., The Mitty is beginning its fifth decade as a "must attend" vintage and historic blockbuster for race fans and competitors alike.
The 2018 season once again begins with HSR's exclusive exhibition race at Sebring International Raceway, March 14 - 17. This limited-entry event is a chance for competitors to race on the legendary track on the same event weekend that features the 66th Annual Mobil 1 Twelve Hour of Sebring.
Following the Sebring opener and The 41st Classic Motorsports Mitty, the third event of the year will be the VIR Historic Races, which return to VIRginia International Raceway (VIR) for the third-straight year, June 1 - 3.
Another summer highlight of the 2018 schedule is HSR's annual appearance at the picturesque Le Circuit Mont-Tremblant in Quebec, Canada, for the 14th edition of the popular Sommet des Légendes. A joint event with the Historic Motor Sports Association (HMSA), the Mont-Tremblant race is scheduled for July 12 - 15.
A return visit to Road Atlanta for the Fall Historics, September 20 - 23, kicks-off consecutive race weekends in Georgia, with the 2018 Savannah Speed Classic returning on its traditional October 25 - 28 date.
The announcement of next year's schedule was made today during the official HSR Drivers Meeting at this weekend's 2017 edition of the Savannah Speed Classic. One of the many popular and annual events on each year's HSR schedule, the race is run on the Grand Prize Circuit, which is located on Hutchinson Island, just across the river from downtown Savannah.