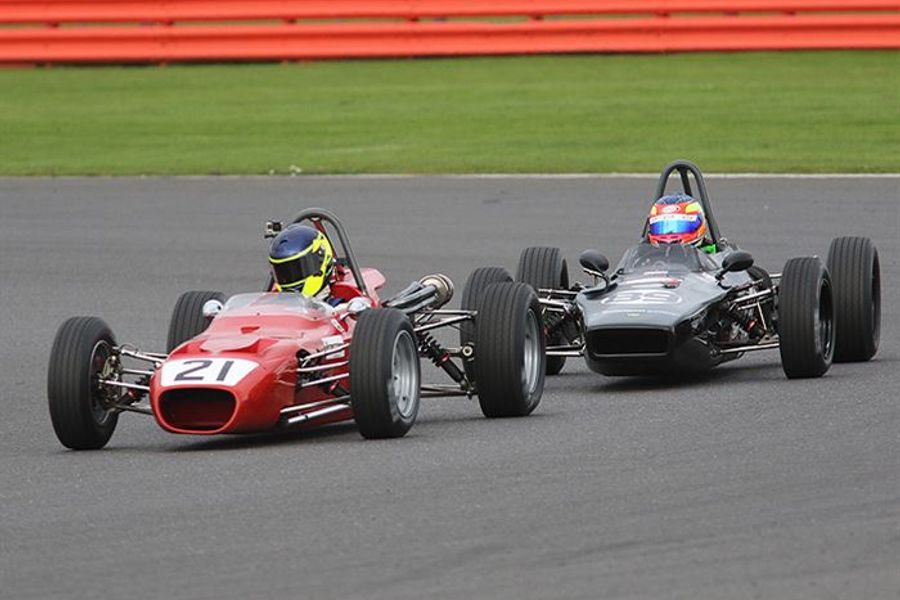 Some of the best racing of the 2015 season made the annual Finals Meeting for the Historic Sports Car Club a huge success at Silverstone on Saturday (17 October). While Max Bartell (Classic F3) and Mike Gardiner (Guards Trophy) clinched championship titles, a breath-taking Historic Formula Ford 1600 race was won by Ben Mitchell after a sensational battle with Neil Fowler. The winning margin was just three-thousandths of a second but it was even closer for third place as Richard Mitchell pipped Callum Grant by one-thousandth of a second, or approximately two inches.

The programme opened with a qualification race to accommodate the 47-car Formula Ford entry. Unfortunately, a multi-car tangle at Brooklands bought out the red flags and it was Ross Dryborough ahead of Chris Sharples in the results.

“The best race of the season,” said 2015 champion Kevin Kivlochan after taking second place to Peter Shaw in the ONI PLC Historic Road Sports Championship race. Their lead battle raged for much of the race and only in the final couple of laps did Shaw edge his Lotus Elan a few yards clear. In another Morgan versus Lotus contest, Robin Pearce took revenge for the Malvern marque to take third from the Elan of Roger Waite.

Sam Wilson made it eight win from nine starts this season in the final round of the Silverline Formula Junior Championship with a commanding win in his Lotus 20/22. “I wanted to make the break in the first half of the race to give myself a margin for getting through the backmarkers,” said Wilson.

Behind the leader, a great battle raged for second as Andrew Hibberd (Lotus 22) came under a concerted challenge from category newcomer Cameron Jackson (Brabham BT2). As they dealt with mid-race traffic, Jackson closed right in, but Hibberd’s experience paid dividends and he was half a second ahead at the flag.

At the head of the ByBox Historic Touring Car Championship race, the V8 power of Peter Hallford’s Ford Mustang kept him ahead of a dogged chase by Tim Davies (Lotus Cortina), who lost likely rival Mark Jones on the second lap. However, the story of the race was a fantastic battle among the Minis and Simon Benoy’s Hillman Imp.

It was historic touring car racing at its very best and former champion Roger Godfrey finally worked to the head of the pack. He was chased over the lime by impressive novice Nick Paddy who beat Jon Milicevic by a thousandth of a second! Benoy, Andy Harrison and Tim Harber were all part of a wonderful contest.

The Historic Formula Ford 1600 final had to be red-flagged after Mark Draghicescu and Simon Toyne touched wheels on the national straight and went off. Both drivers were thankfully okay and the race was restarted as a 10-minute dash.

Returning category aces Mitchell and Fowler soon established a small lead and they enacted a battle that showed both drivers and the category in the best possible light. Seldom more than a few feet apart, they raced impeccably and often ran side-by-side through the corners.

It came down to the final dash through Woodcote to the line and Mitchell was about six inches ahead as Fowler slipstreamed up alongside. “That’s the first time I’ve raced against Neil and it was a great race,” said Mitchell. “It shows what Formula Ford is about,” said Fowler. It was even closer in another fabulous battle for third as Richard Mitchell beat Callum Grant by a thousandth of a second. Rob Wainwright was a few yards back in fifth while two and a half seconds covered the next 10 cars after a breathless race.

As proud fathers go, few were prouder than Stuart Tizzard as his son George scored a first overall race win in the final round of the Guards Trophy. Tizzard junior put the Lenham Spider on pole and won from the front with an assured performance.

Behind Tizzard was a tremendous four-way Chevron battle and less than a second covered the three B8s and a B6 at the flag. James Schryver just beat his uncle Michael to second place while Hugh Colman and Charles Allison were right in the mix. Seventh overall and a clear GT category win was enough to win the championship for TVR Griffith racer Mike Gardiner, but in the early laps Michael Hibberd looked good in his Lotus 23B. Unfortunately a spin at Becketts dropped him to third in class and cost him the title.

Over the early laps, power told in the Derek Bell Trophy race as the Formula 5000s of Neil Glover (Chevron B37) and Frank Lyons (Gurney Eagle) made the pace.

However, once Richard Evans recovered from running wide on the opening lap he worked his Formula Atlantic March 79B up to the big bangers. It took Evans several laps to work ahead of Glover and the power of the Chevron took it back ahead of the March a couple of times before Evans could build a big enough margin to stay ahead.

“I thoroughly enjoyed that, but it is always difficult trying to pass the big cars,” said Evans. Glover gave determined chase while Lyons soon had his hands full fending off Andrew Hibberd who was having his first race in his father Michael’s Formula 2 Brabham BT38. Getting quicker with every lap, Hibberd even managed to nip briefly ahead before Lyons blasted the F5000 back into the final podium place.

As the light faded at the end of the day, the 70s Road Sports Championship season ended with another cracking race. Over the first half of the race, Jim Dean (Lotus Europa) ran neck-and-neck with the Datsun 240Z of Charles Barter.

Then, invitation class racer William Jenkins (BMW CSL) edged into contention and move ahead of Barter to take up the assault on the Lotus. Into Luffield for the final time Jenkins was even briefly ahead, but Dean nipped back in front to make sure of victory as they sprinted to the line.