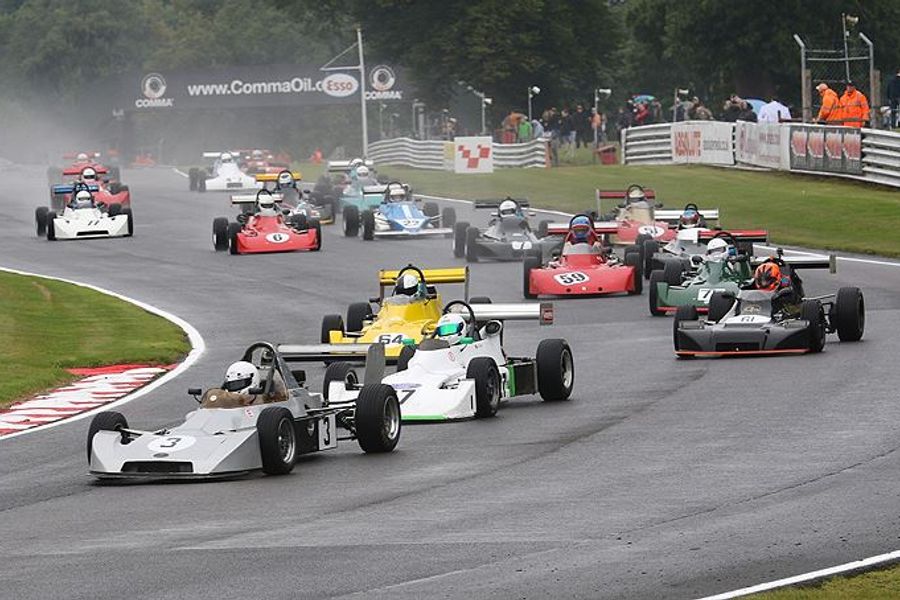 The contest for the HSCC Historic Formula 2000 Championship will be settled at Silverstone this coming Saturday,  31st of October, during the Walter Hayes Trophy meeting.
The major focus for the event, which is organised by the Historic Sports Car Club, is the knock-out competition for Formula Ford 1600s of all ages. However, the deciding round of the HSCC Historic Formula Ford 2000 Championship is the prime support race and Tom Smith and Andrew Park will finally settle their season-long contest.
Saturday’s race, which is sponsored by Clinicjot, is the 13th and final race of a season that started at Thruxton back at Easter. Now, Smith (Royale RP27) and Park (Reynard SF81) come to Silverstone split by just five points. Smith has a small advantage after a tremendous first full season in the category and will gain an extra point when dropped scores are factored in. Both drivers have scored strongly in every race to date, and Smith has a 12 as his lowest score while Cumbria-based Park has a 13 to drop.
With 25 points for a win and 20 for second, plus a point for fastest lap, Park can only go out and try to win with fastest lap. If he did that and Smith was second they would be level on points and Park would take the crown on a tie-break.
However, it is not that easy as fellow pacesetter Callum Grant (Delta T78) will be right in contention for the race even though he is just too far back on points to still have a shot at winning the title.
Meanwhile, out-going champion Benn Simms (Reynard SF77) is back after missing a couple of mid-season races due to a new baby in the Simms household. He won twice at Brands Hatch last time out and will be tough to beat this weekend.
Other strong contenders include Lee Bankhurst (Royale RP30), Colin Wright (Reynard SF79) and Stephen Glasswell (Reynard SF79), but all eyes will be on Smith and Park as the title battle is played out.
A large and eclectic field has been assembled for the HSCC 50km closed wheel race on Saturday and it is the Chevron B6 of Michael Schryver that should set the pace against the similar B8 of Paul Knapton and the Mallock Mk18 of Alan Davenport. No less than three Elva Couriers will make a great sight while Mike Gardiner’s Ford Falcon will be right at the sharp end of the action.
Sunday’s races include the Geoff Friswell Trophy for Clubmans cars of all ages, including those from the HSCC’s Classic Clubmans Championship, as the category wraps up its 50th anniversary season with a race in memory of one of the fastest Clubmans drivers of all. Friswell was famed for some mighty contests with Ray Mallock in the early 1970s and, 40 years later, it is the evergreen Ray who tops the entry in his Mallock Mk18B.