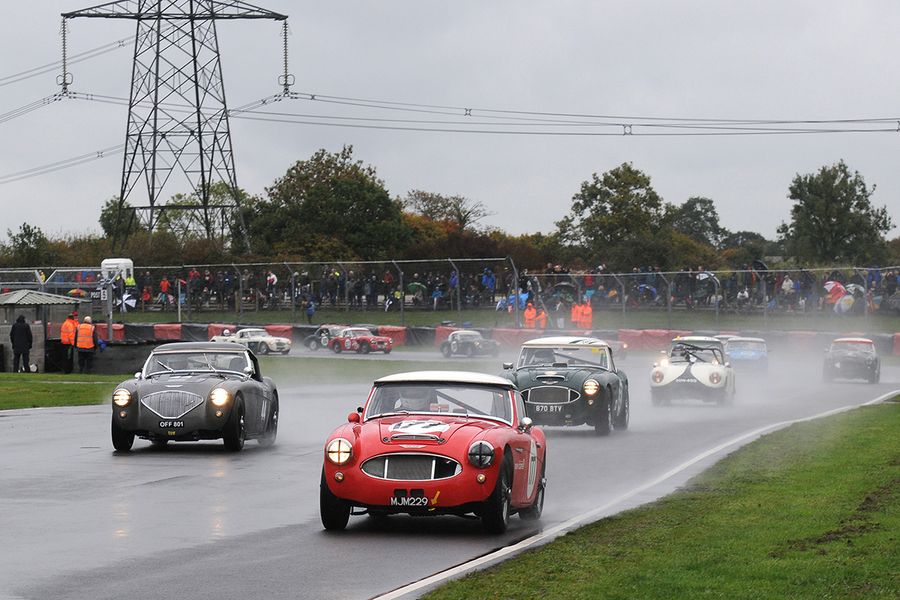 This Saturday, 5th October marks the eighth edition of the Castle Combe Autumn Classic. The event has now established itself as a late-season highlight of Britain’s classic and historic racing calendar, and continues to provide wonderful racing from grids full of period racing sports cars, single-seaters and touring cars.

From spectacular races for cars spanning the 1920s right through to the early 1980s to hundreds of classic cars and special celebrations of Frazer Nash, Aston Martin and Avon, this year’s Autumn Classic is sure to be every bit as good as the preceding seven editions.

This year there will be a strong flavour of Le Mans in Wiltshire as the event honours the 60th anniversary of Aston Martin and Avon winning the Le Mans 24-hours, capped by a  display of landmark Aston Martins. Meanwhile, another famous British sports car marque will be celebrated in the Freddie Giles Memorial race for Frazer Nashes. It you long for the spectacle of sideways cornering in modern racing, do not miss the grid full of Pre-War Nashes.

The first-class race line-up brings eight diverse fields to the grid covering perhaps the widest range of period cars yet at the event. Wrapping up the programme in style will be the Freddie Giles Memorial Race for Pre-War Frazer Nashes, with a grid full of these awesome chain-driven British sports cars and single-seaters from the 1920s and 1930s.

Towards the other end of the age spectrum is the new Classic Alfa Romeo Challenge from the Historic Racing Drivers’ Club. New just a year ago, the race series for classic and historic Alfa Romeos has been an instant hit with large and varied grids of Alfa Romeos doing battle. Marque enthusiast Chris Snowdon has been the man to beat in his potent Alfetta GTV but he has plenty of rivals and there will also be battles across the classes.

Opening the race programme will be a non-championship Formula Ford 1600 race from the Historic Sports Car Club, covering both the Historic and Classic categories. The Historics (for the pre ’72 cars) and the Classics (for up to 1982 cars) will both run under the HSCC wing in 2020, albeit in stand-alone races, and so this combined race will be an interesting marker ahead of the new season. The grid will span a golden era of Formula Ford racing with cars from the first 25 years of the category.

The Norman Dewis Trophy for pre-’66 Jaguars will be a headline race and will be the circuit’s tribute to the late Norman Dewis, the renowned Jaguar test driver who died earlier this year. A lovely mix of sports and saloon cars, including examples of the sublime E-type, will provide a fitting memorial to a remarkable man.

The fans, including the stalwart regulars at Quarry, are going to really enjoy the HRDC Coys Trophy for pre ’66 touring cars. A typically strong and varied field, including Mini Coopers, Lotus Cortinas and Ford Mustangs, will provide a wonderful evocation of saloon car racing here in the 1960s.

Formula Junior has regularly been a popular element of the Autumn Classic with a race for both front- and rear-engined cars from the single-seater category of the late 1950s and early 1960s. This one will be round 12 of 14 in the Silverline UK Formula Junior Championship ahead of the deciding double-header at Silverstone in a fortnight’s time. Andrew Taylor in his Cooper T56 currently heads the points in pursuit of his first major racing title but the front-engined cars of Alex Morton and Peter de la Roche are in hot pursuit.

Representing the early days of the Castle Combe story will be production-based sports cars of the 1950s in the ever-popular FISCAR Historic Intermarque race. Cars from Jaguar, Frazer Nash, Austin Healey, AC, Lotus, Lancia and more will make this another good-looking grid.

The Allstars race completes the trio of races from the Historic Racing Drivers’ Club and this will feature a strong field of pre ’66 sports, GT and touring cars for an entertaining half-hour contest. At the head of the action should be some very rapid sports cars such as AC Cobras and TVR Griffiths.