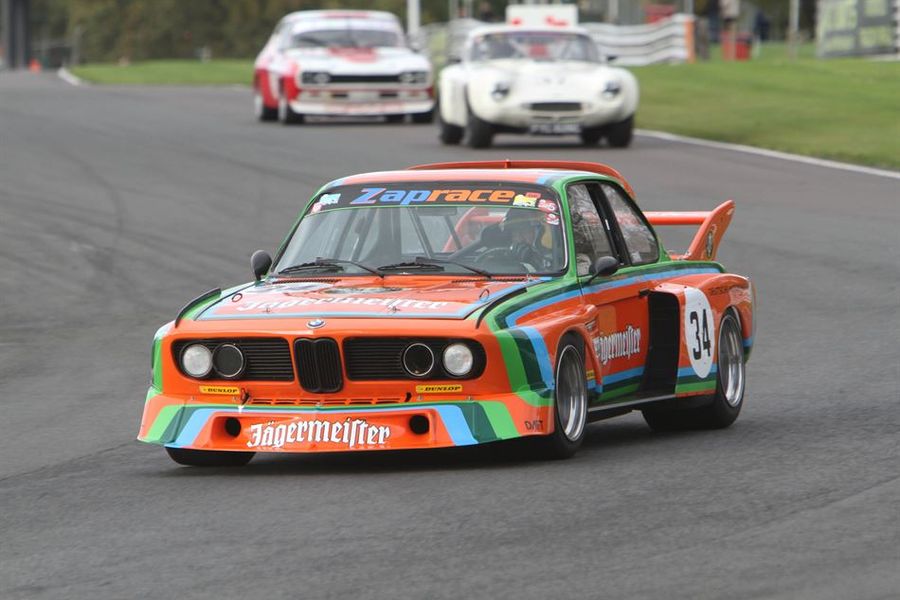 Mike Wilds and Steve Guglielmi triumphed in a fascinating Masters All Series race at Oulton Park this weekend, in a 50-minute race of changing fortunes.

The non-championship race brought together cars from the Masters Pre-66 Touring Car Championship, Gentlemen Drivers Pre-66 GT Championship and 70s Celebration, with the 70s cars the pace-setters. From pole position, Mark Wright (Ford Escort RS1800) stormed into an early lead, chased by former BRM Formula 1 racer Mike Wilds (BMW 3.0 CSL), Mike Gardiner (TVR Griffith) and Steve Dance (Ford Capri). Dance relieved Gardiner of third on lap three, the Ford Escort of Andy Pyke joining the fight two laps later. Up front, Wright built his lead over Wilds, but the pace of the Escort waned towards the end of Wright’s stint: new tyres with which Wright was experimenting started to lose their edge and the car became more difficult to drive. Then the brakes faded on the car meaning that co-driver Dave Coyne was in for a tough second stint.

“The tyres we tried suddenly went off," said Wright. "The handling changed and it just toed out so it became undriveable. Then the brake pedal went to the floor so Dave had a tough job.”

After the pit stops, Coyne led from Steve Guglielmi (in for Wilds) with Steve Dance third, but the three leaders all began to bunch up as Coyne struggled manfully with the recalcitrant Escort. Guglielmi moved ahead with 15 minutes to go, Dance attacking and passing Coyne for second place but his Capri copped a stop-go penalty for speeding in the pit lane. Dance duly pitted, but expensive-sounding clunking noises forced him to park the Ford, taking fourth on completed distance. That allowed Coyne back up to second ahead of Gardiner and Dan Cox in the TVR, with the sideways Ford Capri of Graham Scarborough fifth despite a five-second penalty for exceeding track limits.

Said race-winner Wilds: “Mark drove very well in the first stint. The Escort is a nimble car and the BMW is quite heavy, and I couldn’t go any faster. I set a pace and just drove round and round! It’s nice to have an outright win after class wins in BMWs.”

Wilds/Guglielmi won the 70s Celebration class, with Gardiner/Cox the pick of the Gentlemen Drivers GT bunch ahead of Keith Ahlers/Billy Bellinger (Morgan +4 SLR), while Nick King won the Pre-66 Touring Car class in his Ford Mustang.