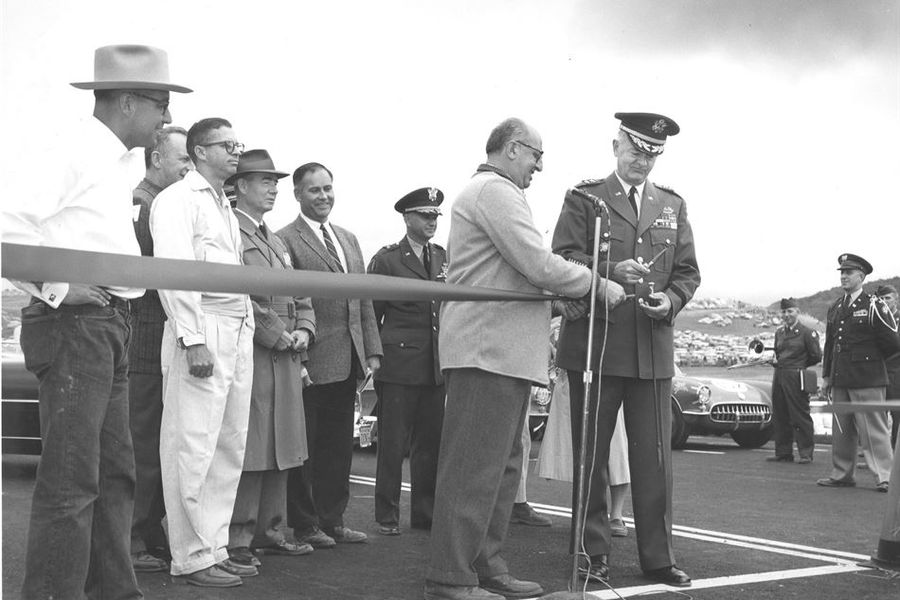 Major General W.M. Breckenridge and SCRAMP officers cut the ribbon at the inaugural Laguna Seca Raceway event on November 9-10, 1957.
On November 9, 1957, the ribbon was cut at Laguna Seca Raceway at the start of its inaugural event, the eighth annual Pebble Beach Road Races held November 9-10. Sixty years later, the iconic road course celebrated its diamond anniversary.
The inaugural event was a continuation of the racing through the forest at nearby Pebble Beach that began in 1950 and ended six years later. After the Pebble Beach Road Races took a tragic turn, the need for a safer course was deemed paramount. The popularity of the races and the financial impact to the community had impressed military authorities at Fort Ord.
Enter a group of civic minded businessmen who were willing to donate their time and money to keep sports car racing alive in Monterey. In mid-1957 the Sports Car Racing Association of the Monterey Peninsula (SCRAMP) was formed and began working with military officers. SCRAMP and the Monterey Chamber of Commerce negotiated a five year deal and paid $3,000 to the Army for use of the land, and on August 7, 1957 a lease was signed.
SCRAMP began fundraising and collected $125,000 for track construction that began the first week of September. Amazingly, just 60 days after starting, the track was completed in time to host the first race in November where 100 entries were received and 35,000 spectators arrived.
In the 60 years that followed, the track has undergone changes and improvements to expand to an 11-turn, 2.238-mile circuit best known for its famous Corkscrew – a hard-left, hard-right turn with a five-and-a-half story drop in elevation. It has hosted Can Am, Trans Am, Indy Car, and 500cc Motorcycle Grands Prix during the height of their respective popularities.
The annual Rolex Monterey Motorsports Reunion is the largest vintage racing event of its kind in North America and has been shortlisted for Motorsport Event of the Year honors at the upcoming Octane Awards. The year-long 60th anniversary celebration was highlighted at the event with an incredible Racing Through the Decades feature display that included historic race cars such as the 1956 Ferrari 500 Testa Rossa that Pete Lovely drove to victory at the track’s inaugural event in 1957.
In addition to bringing world-class motorsports events to the Monterey Peninsula, the Laguna Seca Recreation Area provides year-round camping and hosts other lifestyle and community events such as Sea Otter Classic, a leg of the upcoming 2018 Amgen Tour of California, Turkey Trot, concerts, and monthly Twilight Cycling rides.
A birthday celebration was held in the Hospitality Pavilion on Wednesday, November 8. On behalf of the County of Monterey-owned facility, Supervisor Mary Adams accepted a commemorative 60th anniversary watch from Tissot. Past SCRAMP directors, community leaders, and supporters also joined in for the cake-cutting ceremony.
“We are incredibly pleased to celebrate the 60th birthday of a track that grabs your heart,” said Gill Campbell, general manager of Mazda Raceway Laguna Seca. “Great names like Hill, Moss, Gurney, Andretti, Rainey, Brabham, Rahal, Rossi, Follmer, McLaren, Shelby, Hobbs, Posey, Donohue, Rainey, and so many more are what makes this one of the world’s racing gems. We honor all of the past and present leaders, staff, volunteers, racers, and fans who have made this place what it is and continue pushing it forward for future generations to enjoy.”