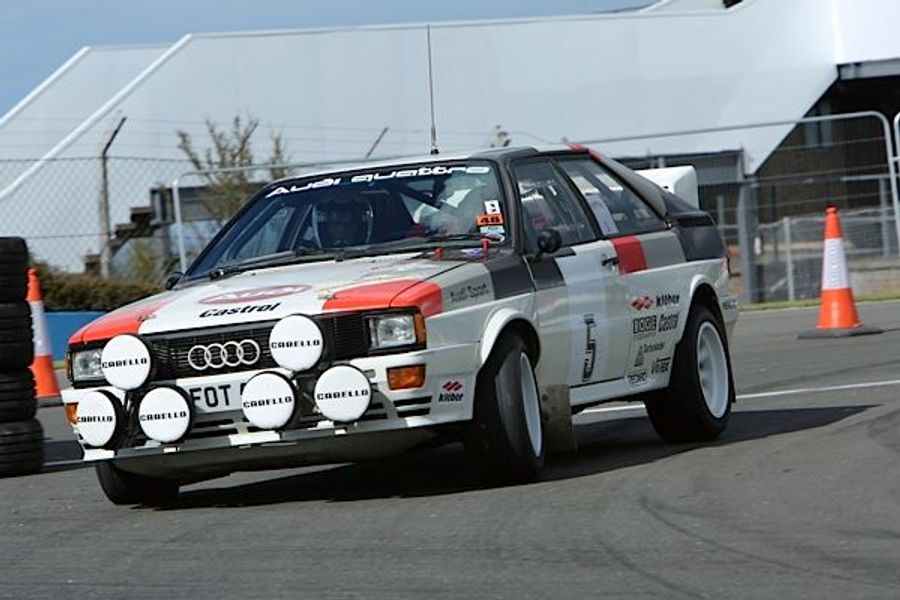 Not all the excitement at the Donington Historic Festival (30th of April, 1st and 2nd of May) takes place out on the track. There is a whole host of other entertainment for historic motorsport lovers to enjoy when they’re not following all the race action generated by 400+ competition cars from the 1920s to the 1990s.
The Tarmac Lake is being put to very good use this year, with spectacular, tyre-smoking demonstrations from Rallying with Group B, an autotest from the Historic Rally Car Register and some lively karting demos from the British Historic Kart Club. Reliving the days when Donington Park was a stage on the RAC Rally in the Group B era, the Festival will welcome Audi quattros, MG Metro 6R4s, Ford RS200s and Porsche 911 RSRs from that period. The Historic Rally Car Register line-up will include veteran historic rally machines such as Sunbeam Alpines, Minis and Hillman Imps, and all the rally action will be commentated on by an undisputed expert: Tony Mason, who navigated Roger Clark to victory in the RAC Rally in 1972.
Over on the Melbourne Hairpin, Festival visitors can enjoy drift taxi rides with BookaTrack Caterham’s Caterham Experience, experiencing adrenaline-fuelled, tyre-squealing, sideways action with a professional instructor at the wheel.
On the Sunday of the Festival, a Spitfire from the Royal Air Force Battle of Britain Memorial Flight will make a guest appearance in the sky above Donington Park, and it will be followed on the Monday by the BBMF’s Douglas C-47 Dakota
At lunchtime on Saturday and Sunday the crowds will be entertained by historic Formula 1 cars powering their way round the track, and each lunch break also features a parade representing the many car clubs who are converging on Donington Park for the Festival. On the Monday the car club parade will feature a mass presence from the BMW Car Club GB, celebrating that marque’s 100th anniversary.
Jaguar fans are in for a treat at the Donington Historic Festival. Not only are there Jaguars galore competing in the various grids across the weekend, the Bank Holiday Monday of the event features a round of the Jaguar Classic Challenge. In addition Jaguar is staging a regional heat of the hugely popular Jaguar Trophy concours in the race paddock that same day, as the search gets underway for the UK’s finest Jaguars to go through to the final at the Windsor Castle Concours of Elegance later in the year.
The infield will be packed with displays from dozens of car clubs, showcasing cherished classics of all shapes and sizes, while Festival ticket holders can also use their ticket to gain half-price entry to the superb Donington Grand Prix Collection museum over the weekend.
The race and rally paddocks always draw large crowds, attracted by the opportunity to get a really close up look at – and some great photographs of – all the priceless competition machines. And the paddock will also play host to a wide range of traders, giving plenty of shopping opportunities.
Hillman Imps Ford RS200s Sunbeam Alpines MG Metro 6R4s Historic Rally Car Register Donington Historic Festival The Tarmac Lake Porsche 911 RSRs Audi quattros Group B Minis Donington Park